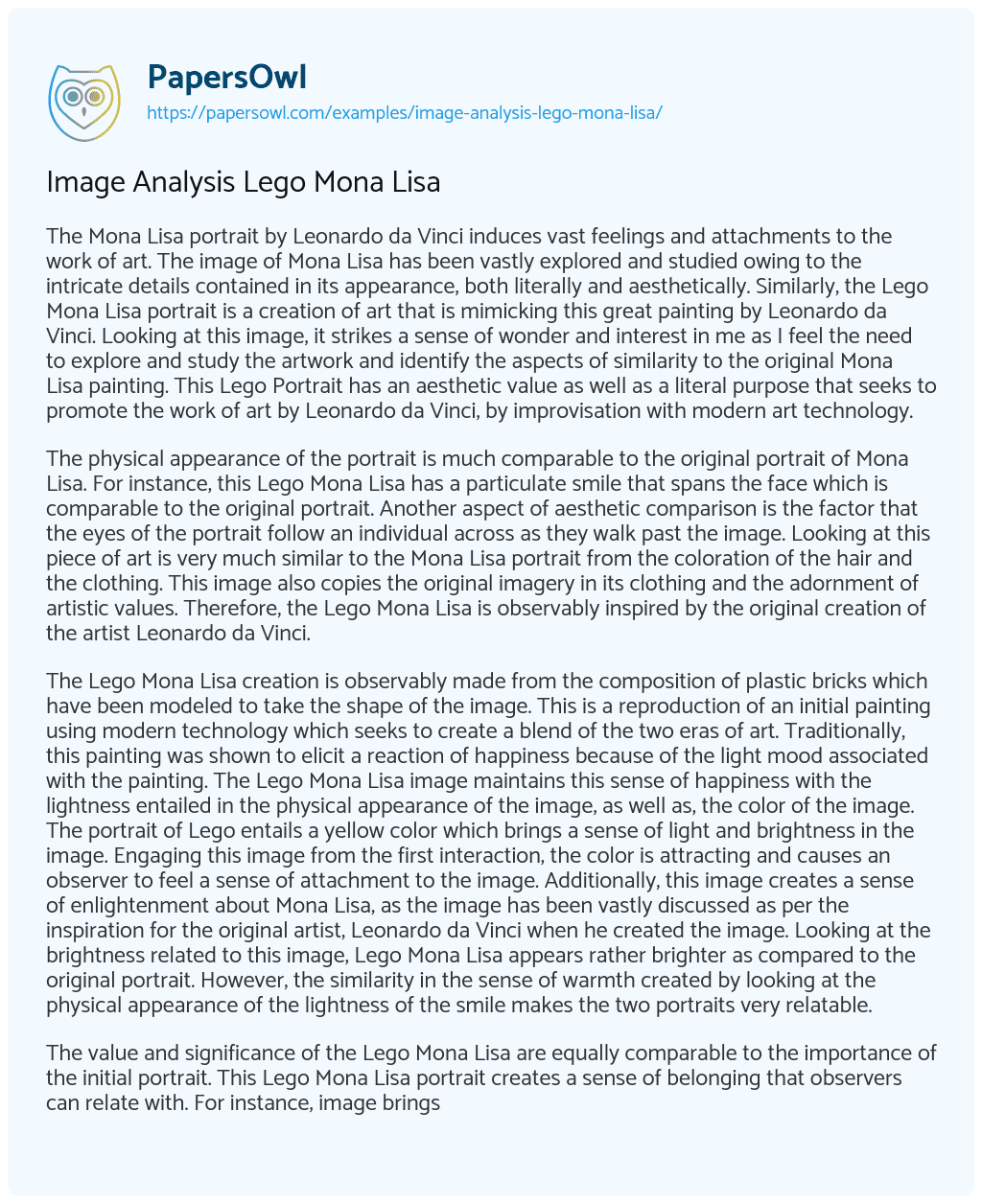 The Mona Lisa portrait by Leonardo da Vinci induces vast feelings and attachments to the work of art. The image of Mona Lisa has been vastly explored and studied owing to the intricate details contained in its appearance, both literally and aesthetically. Similarly, the Lego Mona Lisa portrait is a creation of art that is mimicking this great painting by Leonardo da Vinci. Looking at this image, it strikes a sense of wonder and interest in me as I feel the need to explore and study the artwork and identify the aspects of similarity to the original Mona Lisa painting. This Lego Portrait has an aesthetic value as well as a literal purpose that seeks to promote the work of art by Leonardo da Vinci, by improvisation with modern art technology.

The physical appearance of the portrait is much comparable to the original portrait of Mona Lisa. For instance, this Lego Mona Lisa has a particulate smile that spans the face which is comparable to the original portrait. Another aspect of aesthetic comparison is the factor that the eyes of the portrait follow an individual across as they walk past the image. Looking at this piece of art is very much similar to the Mona Lisa portrait from the coloration of the hair and the clothing. This image also copies the original imagery in its clothing and the adornment of artistic values. Therefore, the Lego Mona Lisa is observably inspired by the original creation of the artist Leonardo da Vinci.

The Lego Mona Lisa creation is observably made from the composition of plastic bricks which have been modeled to take the shape of the image. This is a reproduction of an initial painting using modern technology which seeks to create a blend of the two eras of art. Traditionally, this painting was shown to elicit a reaction of happiness because of the light mood associated with the painting. The Lego Mona Lisa image maintains this sense of happiness with the lightness entailed in the physical appearance of the image, as well as, the color of the image. The portrait of Lego entails a yellow color which brings a sense of light and brightness in the image. Engaging this image from the first interaction, the color is attracting and causes an observer to feel a sense of attachment to the image. Additionally, this image creates a sense of enlightenment about Mona Lisa, as the image has been vastly discussed as per the inspiration for the original artist, Leonardo da Vinci when he created the image. Looking at the brightness related to this image, Lego Mona Lisa appears rather brighter as compared to the original portrait. However, the similarity in the sense of warmth created by looking at the physical appearance of the lightness of the smile makes the two portraits very relatable.

The value and significance of the Lego Mona Lisa are equally comparable to the importance of the initial portrait. This Lego Mona Lisa portrait creates a sense of belonging that observers can relate with. For instance, image brings back the age of art where modern influence is taking eminence in the reproduction of traditional artistic works. The image is culturally significant since it relates the traditional artistic value to modern synthetic art, through the reproduction of Mona Lisa using animated imagery. Another significance of this image is in the entertainment value that it brings. Not many people have had the opportunity to interact with the original painting or even the image itself. However, through the publication of the Lego Mona Lisa portrait, people can try to relate to the original works of Leonardo da Vinci hence, get to enjoy the work of art. Additionally, the Lego Mona Lisa can be explored in the modern art industry for marketing purposes where the display can have significant economic value to the creators. Therefore, this image has both cultural significance, as well as, economic value. The symbolic influence of Mona Lisa is what makes this Lego portrait very memorable for the people who have had prior interaction with the initial Mona Lisa painting.

The image is interesting in the part of the hands where the make does to have distinct fingers defined as in the original image. this is because of the technology of plastic pricks used to make the portrait. Therefore, observing this aspect of the image, it is notable that modern technology does not reproduce the actual image in its entirety. There are aspects of comparison where the image is not entirely similar to the original Mona Lisa painting by Leonardo da Vinci. Nonetheless, it has a resemblance that creates a vast basis for comparison and likeness.
In conclusion, this image is comparable to the original portrait of Mona Lisa. The image retains the attributes of facial expression and appearance that create a sense of enthusiasm and appreciation towards the artistic value. The image has both aesthetic and cultural significance and is very engaging to an observer.