How Art has been Used to Influence on Issues? 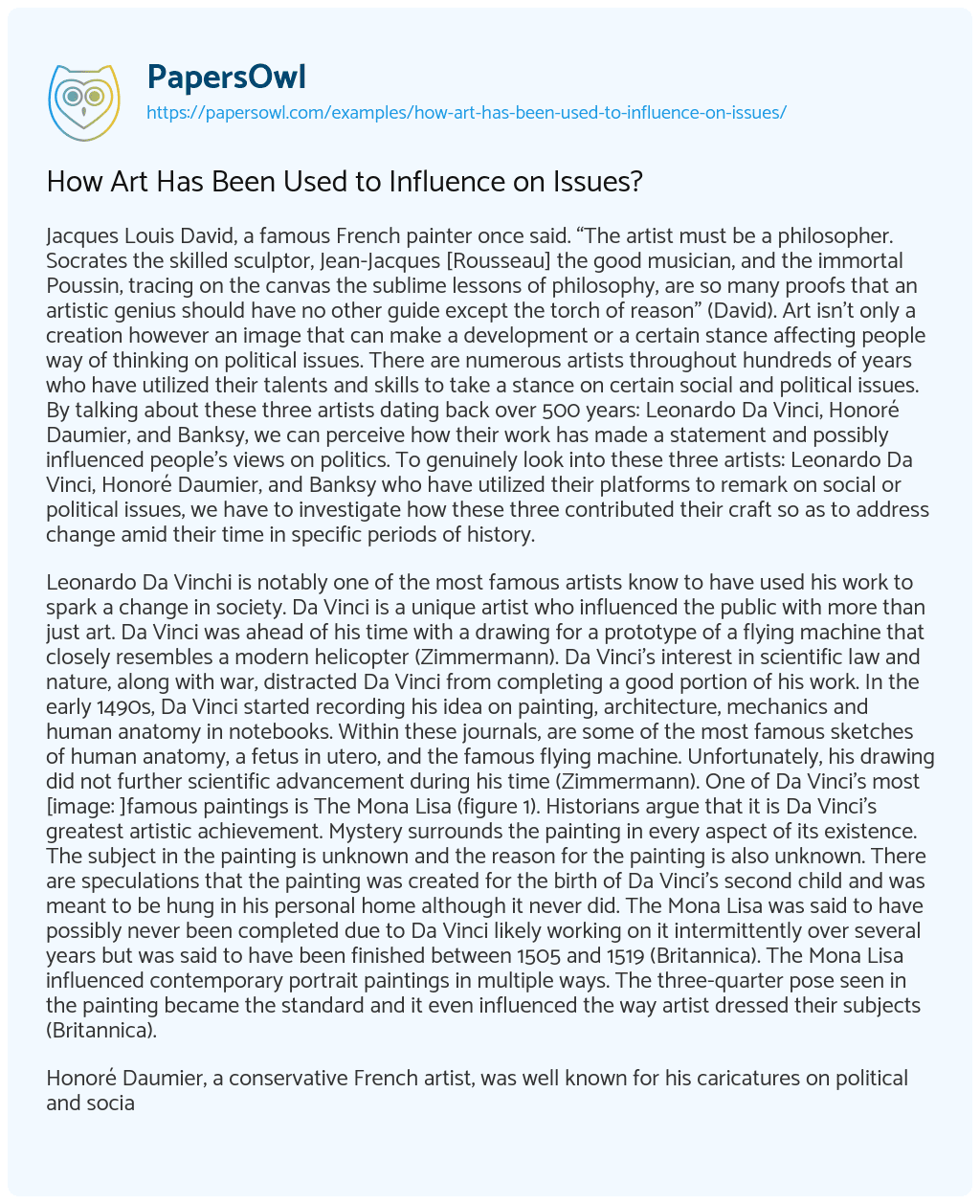 Jacques Louis David, a famous French painter once said. “The artist must be a philosopher. Socrates the skilled sculptor, Jean-Jacques [Rousseau] the good musician, and the immortal Poussin, tracing on the canvas the sublime lessons of philosophy, are so many proofs that an artistic genius should have no other guide except the torch of reason” (David). Art isn’t only a creation however an image that can make a development or a certain stance affecting people way of thinking on political issues. There are numerous artists throughout hundreds of years who have utilized their talents and skills to take a stance on certain social and political issues. By talking about these three artists dating back over 500 years: Leonardo Da Vinci, Honoré Daumier, and Banksy, we can perceive how their work has made a statement and possibly influenced people’s views on politics. To genuinely look into these three artists: Leonardo Da Vinci, Honoré Daumier, and Banksy who have utilized their platforms to remark on social or political issues, we have to investigate how these three contributed their craft so as to address change amid their time in specific periods of history.

Leonardo Da Vinchi is notably one of the most famous artists know to have used his work to spark a change in society. Da Vinci is a unique artist who influenced the public with more than just art. Da Vinci was ahead of his time with a drawing for a prototype of a flying machine that closely resembles a modern helicopter (Zimmermann). Da Vinci’s interest in scientific law and nature, along with war, distracted Da Vinci from completing a good portion of his work. In the early 1490s, Da Vinci started recording his idea on painting, architecture, mechanics and human anatomy in notebooks. Within these journals, are some of the most famous sketches of human anatomy, a fetus in utero, and the famous flying machine. Unfortunately, his drawing did not further scientific advancement during his time (Zimmermann). One of Da Vinci’s most [image: ]famous paintings is The Mona Lisa (figure 1). Historians argue that it is Da Vinci’s greatest artistic achievement. Mystery surrounds the painting in every aspect of its existence. The subject in the painting is unknown and the reason for the painting is also unknown. There are speculations that the painting was created for the birth of Da Vinci’s second child and was meant to be hung in his personal home although it never did. The Mona Lisa was said to have possibly never been completed due to Da Vinci likely working on it intermittently over several years but was said to have been finished between 1505 and 1519 (Britannica). The Mona Lisa influenced contemporary portrait paintings in multiple ways. The three-quarter pose seen in the painting became the standard and it even influenced the way artist dressed their subjects (Britannica).

Honoré Daumier, a conservative French artist, was well known for his caricatures on political and social issues during his time. Daumier was born in Marseille, France in 1808. His career spanned from the late 1820s to late 1870s. Daumier died in Valamondois, France in 1879. Daumier used skills in several satirical publications in the era which were powerful platforms used to influence the masses. The first publication he worked for was La Caricature. La Caricature was launched by a man named Charles Philipon. Daumier published pieces [image: ]highlighting the corruption of government being led by Louis Philippe, the king of France from 1830-1848 (artble). In 1832, Daumier published a cartoon titled Gargantua (figure2). The subject of the drawing was King Philippe drawn as an oversized character devouring people carrying baskets of money brought to him by the people he ruled over. This cartoon landed Daumier in prison for six months at Ste Pelagic Prison (artble). His six-month sentence was suspended and shortly after, Daumier released a second drawing that was just as vicious towards the king. The results of what happened to Daumier resulted in Daumier gaining a large following of supporters calling for less corruption in government. As a result of Daumier’s drawings, a law was passed in 1834 that banned satire towards the government. By 1834, La Caricature shut down. Daumier continued his publications in Le Charivari which was another satirical publication founded by Philipon. Daumier married the mother of his child in 1846 and his son died two years later. This caused Daumier to only draw in his spare time. In 1873, Daumier went completely blind and was no longer able to draw. Daumier late-life work did not get receive much notice until after his death in 1879 (artble).

[image: ]Banksy is arguably one of the most controversial artists of our time for many reasons. Not only does he make political and social stances in his work, but he’s also completely anonymous creating a huge mystery and controversy on who Banksy even is. Rumor has it, Banksy was born in Bristol, England around 1970 with the exact date being unknown. Banksy is known for his controversial graffiti art. Banksy creates his pieces using stencils for speed and sprays paint. Since his first piece was discovered, he has given multiple interviews, but none were done in person. He would conduct these interviews through email or by recording his interviews while disguising his voice. The first work attributed to Banksy was a piece called The Mild Mild West (figure 3). The piece portrays a teddy bear throwing a Molotov cocktail at three riot control personnel.

This was made in response to a highly publicized violent police reaction to underground raves. Banksy’s work was said to displayed calls for peace. Since 200, Banksy art has popped up all over the world. A documentary was made in 2014 titled Banksy Does New York. The subject of the documentary was on Banksy’s 31 days New York “takeover” in 2013. Banksy told The Voice, “New York calls to graffiti writers like a dirty old lighthouse. We all want to prove ourselves here” (Banksy). Banksy spent 31 days providing a new piece each day. After his presence was made aware of the country, people flooded the streets causing disruption and uproar just to see the next Banksy piece. During his visit, his work displayed the cultural issues known in New York. He portrayed the poverty, heartbreak, and all around the stigma that New York carries. Banksy was said to bring light to the authoritarianism all around us. About 500 years after Da Vinci painted The Mona Lisa, Banksy painted a representation of it called Mona Lisa Bazooka [image: ](figure4). Banksy left he seriousness in the subjects face as Da Vinci had originally done, but had added some headphones on her ears and placed a bazooka in her hands. The addition of the bazooka was said to make the smile portrayed in the painting to be menacing. The headphones paired with the original peacefulness of Da Vinci’s painting was said to be a statement on how removed from reality people were. Wars such as the war in Iraq, the Somali Civil War, and the Mexican Drug War, were in full swing yet people were oblivious to anything going on outside of their own lives. The piece made a strong statement on this issue (The Art Story).

There are numerous artists not mentioned in this paper throughout history who have utilized their talents to take a stance on certain social and political issues. Art has been used from basic paintings to political cartoons in publications and street graffiti to make artistic voices heard on the social and political issue. Looking at this artist and the work they did, we can see how they have played roles in people’s lives and alerted people to issues they may not have been aware of before. Art has been used as a powerful tool and we can safely assume that in the present, we will continue to see art used as a powerful tool to influence the masses.

How Art Has Been Used to Influence on Issues?. (2021, May 17). Retrieved from https://papersowl.com/examples/how-art-has-been-used-to-influence-on-issues/