“A Picture Says a Thousand Words” 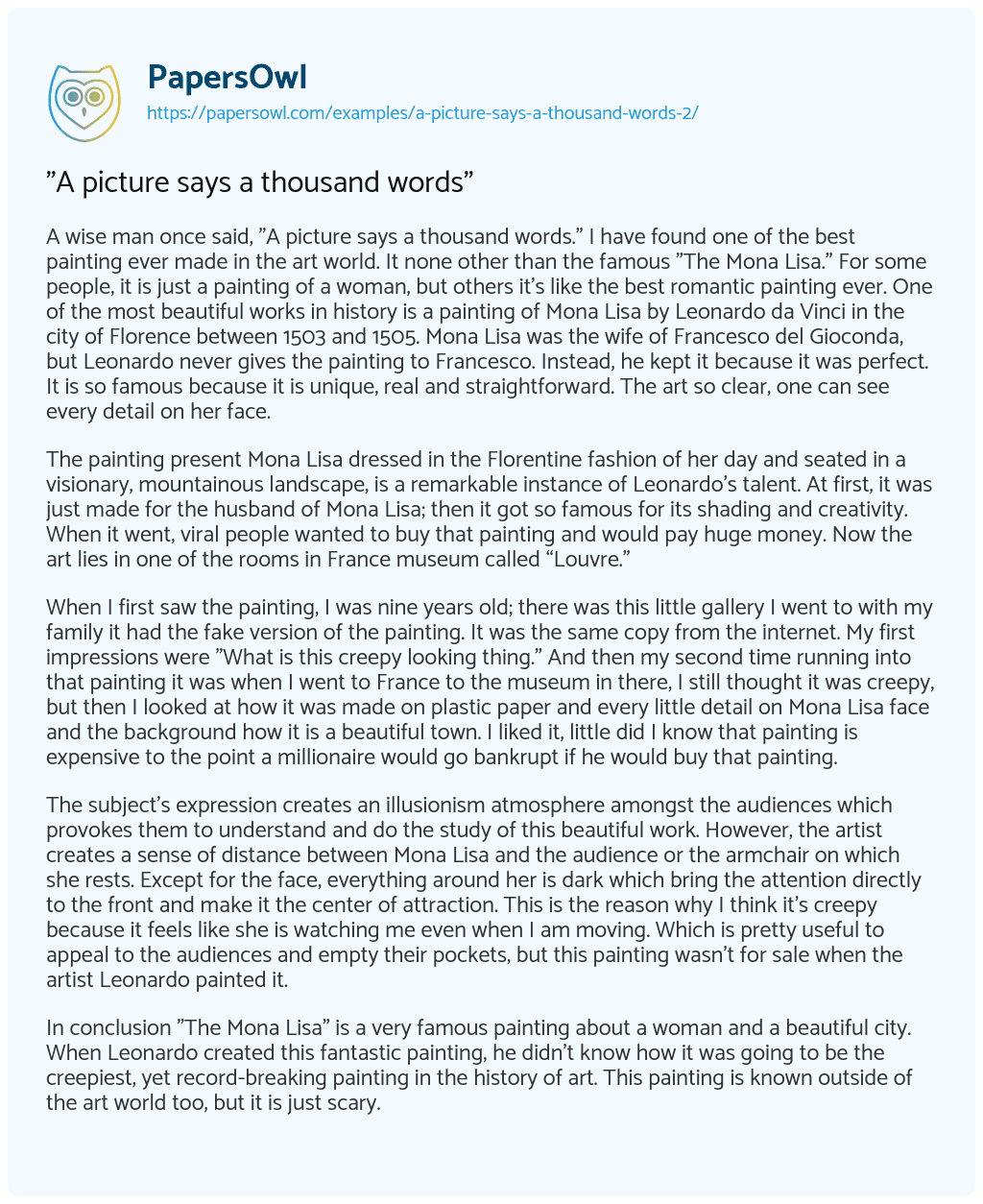 A wise man once said, “A picture says a thousand words.” I have found one of the best painting ever made in the art world. It none other than the famous “The Mona Lisa.” For some people, it is just a painting of a woman, but others it’s like the best romantic painting ever. One of the most beautiful works in history is a painting of Mona Lisa by Leonardo da Vinci in the city of Florence between 1503 and 1505. Mona Lisa was the wife of Francesco del Gioconda, but Leonardo never gives the painting to Francesco. Instead, he kept it because it was perfect. It is so famous because it is unique, real and straightforward. The art so clear, one can see every detail on her face.

The painting present Mona Lisa dressed in the Florentine fashion of her day and seated in a visionary, mountainous landscape, is a remarkable instance of Leonardo’s talent. At first, it was just made for the husband of Mona Lisa; then it got so famous for its shading and creativity. When it went, viral people wanted to buy that painting and would pay huge money. Now the art lies in one of the rooms in France museum called “Louvre.”

When I first saw the painting, I was nine years old; there was this little gallery I went to with my family it had the fake version of the painting. It was the same copy from the internet. My first impressions were “What is this creepy looking thing.” And then my second time running into that painting it was when I went to France to the museum in there, I still thought it was creepy, but then I looked at how it was made on plastic paper and every little detail on Mona Lisa face and the background how it is a beautiful town. I liked it, little did I know that painting is expensive to the point a millionaire would go bankrupt if he would buy that painting.

The subject’s expression creates an illusionism atmosphere amongst the audiences which provokes them to understand and do the study of this beautiful work. However, the artist creates a sense of distance between Mona Lisa and the audience or the armchair on which she rests. Except for the face, everything around her is dark which bring the attention directly to the front and make it the center of attraction. This is the reason why I think it’s creepy because it feels like she is watching me even when I am moving. Which is pretty useful to appeal to the audiences and empty their pockets, but this painting wasn’t for sale when the artist Leonardo painted it.

In conclusion “The Mona Lisa” is a very famous painting about a woman and a beautiful city. When Leonardo created this fantastic painting, he didn’t know how it was going to be the creepiest, yet record-breaking painting in the history of art. This painting is known outside of the art world too, but it is just scary.

"A picture says a thousand words". (2020, Feb 23). Retrieved from https://papersowl.com/examples/a-picture-says-a-thousand-words-2/

The Art between the Creation of Adam and Mona Lisa