An Analysis of Great Quattrocento and High Renaissance Art 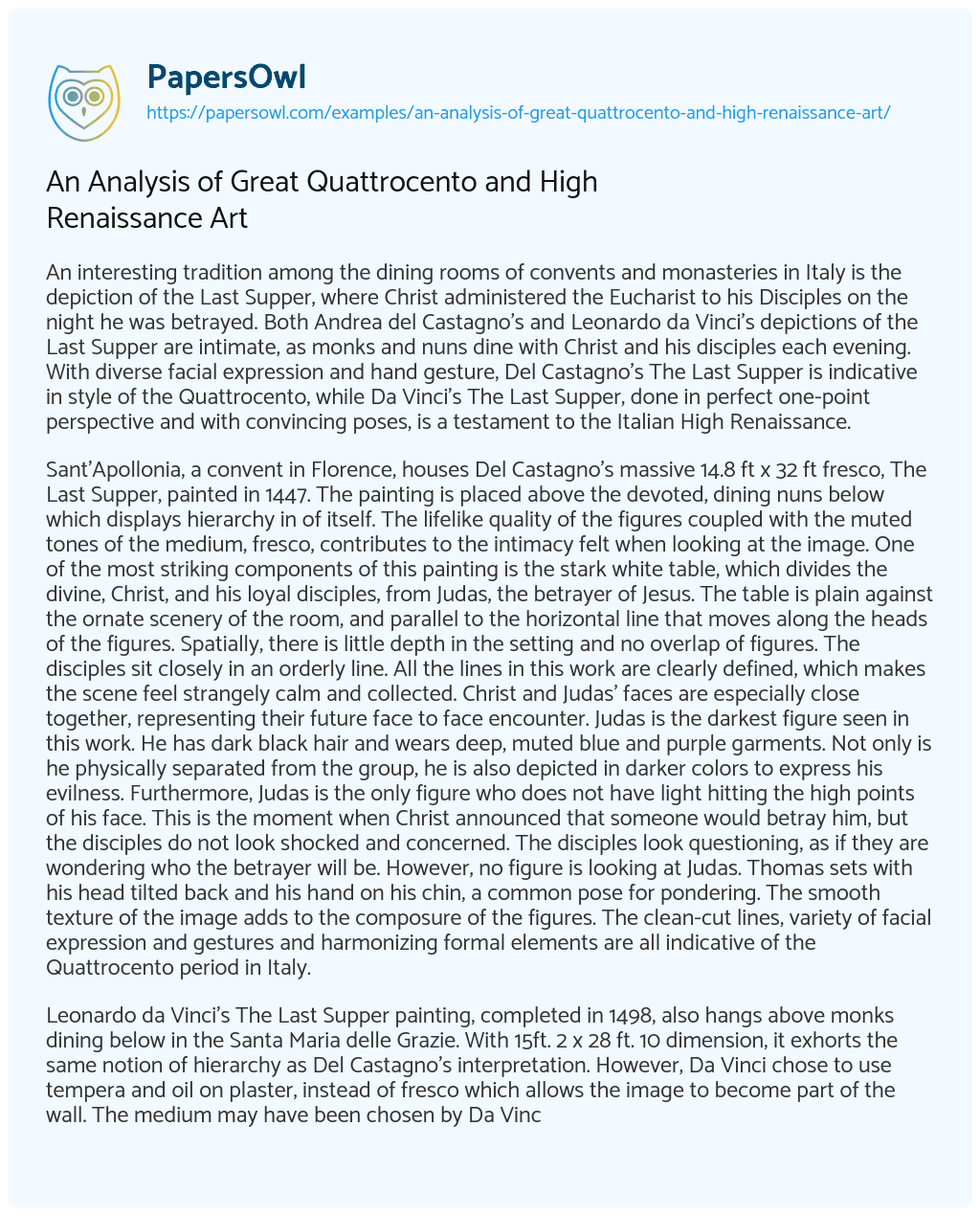 An interesting tradition among the dining rooms of convents and monasteries in Italy is the depiction of the Last Supper, where Christ administered the Eucharist to his Disciples on the night he was betrayed. Both Andrea del Castagno’s and Leonardo da Vinci’s depictions of the Last Supper are intimate, as monks and nuns dine with Christ and his disciples each evening. With diverse facial expression and hand gesture, Del Castagno’s The Last Supper is indicative in style of the Quattrocento, while Da Vinci’s The Last Supper, done in perfect one-point perspective and with convincing poses, is a testament to the Italian High Renaissance.

Sant’Apollonia, a convent in Florence, houses Del Castagno’s massive 14.8 ft x 32 ft fresco, The Last Supper, painted in 1447. The painting is placed above the devoted, dining nuns below which displays hierarchy in of itself. The lifelike quality of the figures coupled with the muted tones of the medium, fresco, contributes to the intimacy felt when looking at the image. One of the most striking components of this painting is the stark white table, which divides the divine, Christ, and his loyal disciples, from Judas, the betrayer of Jesus. The table is plain against the ornate scenery of the room, and parallel to the horizontal line that moves along the heads of the figures. Spatially, there is little depth in the setting and no overlap of figures. The disciples sit closely in an orderly line. All the lines in this work are clearly defined, which makes the scene feel strangely calm and collected. Christ and Judas’ faces are especially close together, representing their future face to face encounter. Judas is the darkest figure seen in this work. He has dark black hair and wears deep, muted blue and purple garments. Not only is he physically separated from the group, he is also depicted in darker colors to express his evilness. Furthermore, Judas is the only figure who does not have light hitting the high points of his face. This is the moment when Christ announced that someone would betray him, but the disciples do not look shocked and concerned. The disciples look questioning, as if they are wondering who the betrayer will be. However, no figure is looking at Judas. Thomas sets with his head tilted back and his hand on his chin, a common pose for pondering. The smooth texture of the image adds to the composure of the figures. The clean-cut lines, variety of facial expression and gestures and harmonizing formal elements are all indicative of the Quattrocento period in Italy.

Leonardo da Vinci’s The Last Supper painting, completed in 1498, also hangs above monks dining below in the Santa Maria delle Grazie. With 15ft. 2 x 28 ft. 10 dimension, it exhorts the same notion of hierarchy as Del Castagno’s interpretation. However, Da Vinci chose to use tempera and oil on plaster, instead of fresco which allows the image to become part of the wall. The medium may have been chosen by Da Vinci to help create his characteristic sfumato. Since a Vinci’s The Last Supper was not done in fresco, the texture appears slightly rougher due to the deterioration over time. However, in its prime, the painting would have appeared smooth; sfumato, being smoky, produces a soft texture appearance. This makes the scene more approachable. There seems to be a bright light radiating from the bottom middle of the painting that illuminates the table, Christ and his disciples, slowly fading. The surroundings are in the shadows, which adds an air of mystery to the work which draws the viewer in. All of the lines in this work are soft and subtle, which adds to the intimacy felt. In contrast to Del Castagno’s piece, Christ is in the very center of composition; his head is the vanishing point for the orthogonals. Instead of being placed behind a figure, Christ sits center with space around him, and the other figures are grouped in sets of three across the table. Here, Da Vinci has overlapped the figures and still maintained their life-like three-dimensionality, whereas Del Castagno created separate, minimal interacting figures. The figure’s positions in this work are very important. At this moment, Christ has just said that someone will betray him tonight. Thus, the disciples are moving toward Christ and each other. But, Judas, the betrayer, leans away. In this way, Da Vinci tactfully explains who Judas is, whereas Del Castagno outwardly showed Judas’ character by placing him on the other side of the table. Judas is the only disciple depicted who has dark hair, but in this depiction, his garments are similar to the other figures. The oil paint is the likely cause for the brightness of the garments the figures wear. The disciples are all in direct contact, leaned into each other, talking and having face to face encounters. The interaction of the figures complements the intimate mood. The expressive poses of the figures, compositional stability and perfect linear perspective of this work constitute work of the High Renaissance period of art in Italy. Furthermore, Da Vinci even included architectural forms with the lunettes at the top of the image, which is a mark of High Renaissance art.

While both interpretations of the Last Supper are an intimate impression of Christ’s last moments with his disciples, the paintings articulate different periods of art. Andrea del Castagno’s The Last Supper, with realistic facial expression and gesture, with diversity of figure orientation and with lack of depth is an example of Quattrocento art. Leonardo Da Vinci’s The Last Supper, with diversity of pose in overlapping figures, with perfect one-point perspective and with examples of architecture is an example of High Renaissance Italian art.

An Analysis of Great Quattrocento and High Renaissance Art. (2020, Apr 05). Retrieved from https://papersowl.com/examples/an-analysis-of-great-quattrocento-and-high-renaissance-art/