Michelangelo and Raphael in in the Renaissance 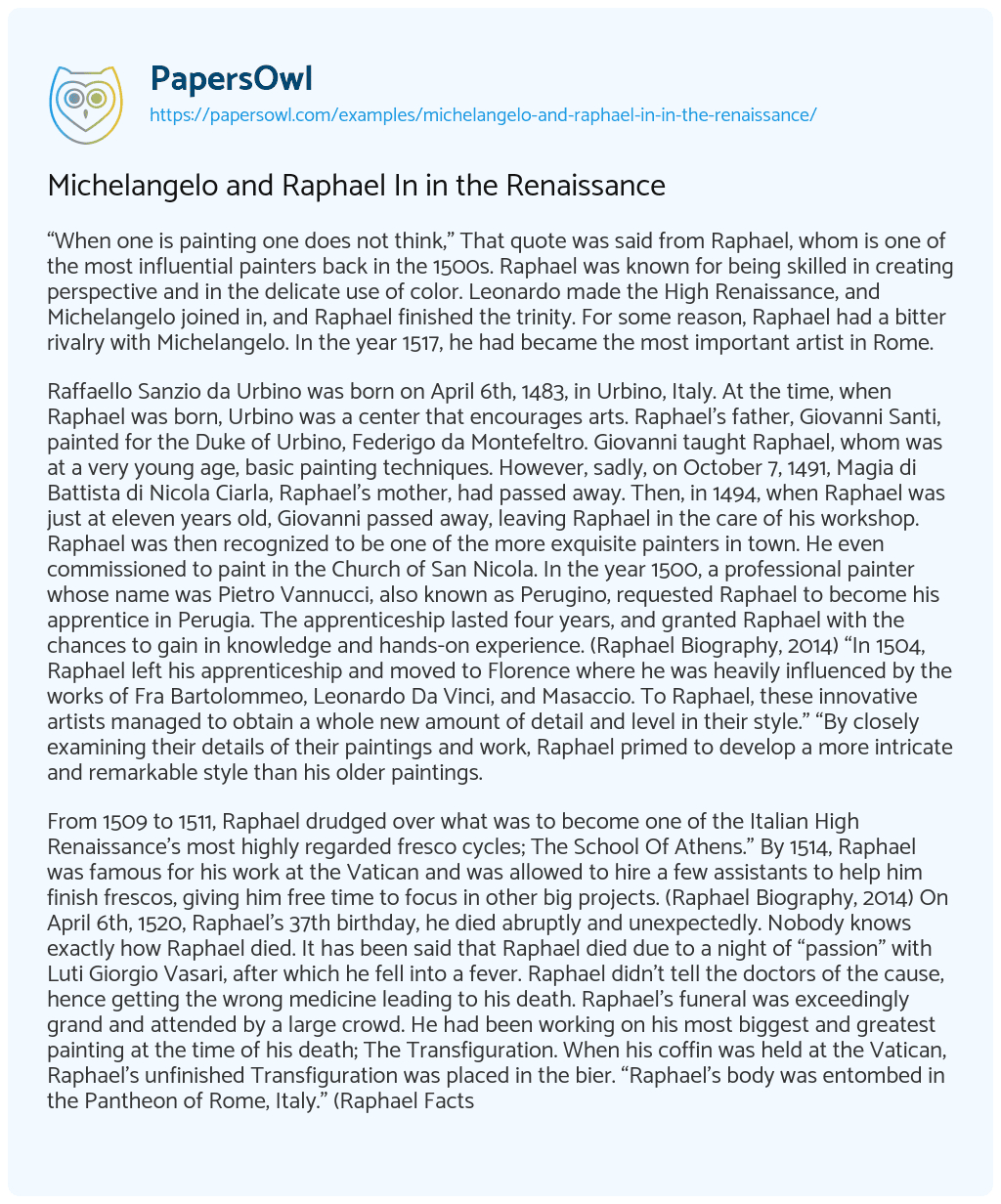 “When one is painting one does not think,” That quote was said from Raphael, whom is one of the most influential painters back in the 1500s. Raphael was known for being skilled in creating perspective and in the delicate use of color. Leonardo made the High Renaissance, and Michelangelo joined in, and Raphael finished the trinity. For some reason, Raphael had a bitter rivalry with Michelangelo. In the year 1517, he had became the most important artist in Rome.

Raffaello Sanzio da Urbino was born on April 6th, 1483, in Urbino, Italy. At the time, when Raphael was born, Urbino was a center that encourages arts. Raphael’s father, Giovanni Santi, painted for the Duke of Urbino, Federigo da Montefeltro. Giovanni taught Raphael, whom was at a very young age, basic painting techniques. However, sadly, on October 7, 1491, Magia di Battista di Nicola Ciarla, Raphael’s mother, had passed away. Then, in 1494, when Raphael was just at eleven years old, Giovanni passed away, leaving Raphael in the care of his workshop. Raphael was then recognized to be one of the more exquisite painters in town. He even commissioned to paint in the Church of San Nicola. In the year 1500, a professional painter whose name was Pietro Vannucci, also known as Perugino, requested Raphael to become his apprentice in Perugia. The apprenticeship lasted four years, and granted Raphael with the chances to gain in knowledge and hands-on experience. (Raphael Biography, 2014) “In 1504, Raphael left his apprenticeship and moved to Florence where he was heavily influenced by the works of Fra Bartolommeo, Leonardo Da Vinci, and Masaccio. To Raphael, these innovative artists managed to obtain a whole new amount of detail and level in their style.” “By closely examining their details of their paintings and work, Raphael primed to develop a more intricate and remarkable style than his older paintings.

From 1509 to 1511, Raphael drudged over what was to become one of the Italian High Renaissance’s most highly regarded fresco cycles; The School Of Athens.” By 1514, Raphael was famous for his work at the Vatican and was allowed to hire a few assistants to help him finish frescos, giving him free time to focus in other big projects. (Raphael Biography, 2014) On April 6th, 1520, Raphael’s 37th birthday, he died abruptly and unexpectedly. Nobody knows exactly how Raphael died. It has been said that Raphael died due to a night of “passion” with Luti Giorgio Vasari, after which he fell into a fever. Raphael didn’t tell the doctors of the cause, hence getting the wrong medicine leading to his death. Raphael’s funeral was exceedingly grand and attended by a large crowd. He had been working on his most biggest and greatest painting at the time of his death; The Transfiguration. When his coffin was held at the Vatican, Raphael’s unfinished Transfiguration was placed in the bier. “Raphael’s body was entombed in the Pantheon of Rome, Italy.” (Raphael Facts, 2019) (Raphael Facts, 2019) Raphael’s art is known for its perfection and brilliant visuality. Raphael’s works were thought highly of more than any other artist and he was the greatest model for history painting. Though Leonardo and Michelangelo has surpassed his fame since then, Raphael is still considered one of the greatest artists. Raphael had a bitter rivalry with Michelangelo. They competed for patrons and their works to be compared by their compteraries as well for the public. Raphael became perhaps the most famous painter in the Renaissance and was nicknamed “Prince of Painters.” When Raphael died, Michelangelo’s influence was more widespread. He declared: “Everything he knew in art, he learnt from me.”

Michelangelo and Raphael In in the Renaissance. (2021, Apr 08). Retrieved from https://papersowl.com/examples/michelangelo-and-raphael-in-in-the-renaissance/

Biography of Raphael – from Birth to Death

Renaissance: the Rebirth of Culture