“The Virgin and Child with Saint Anne” by Leonardo Da Vinci 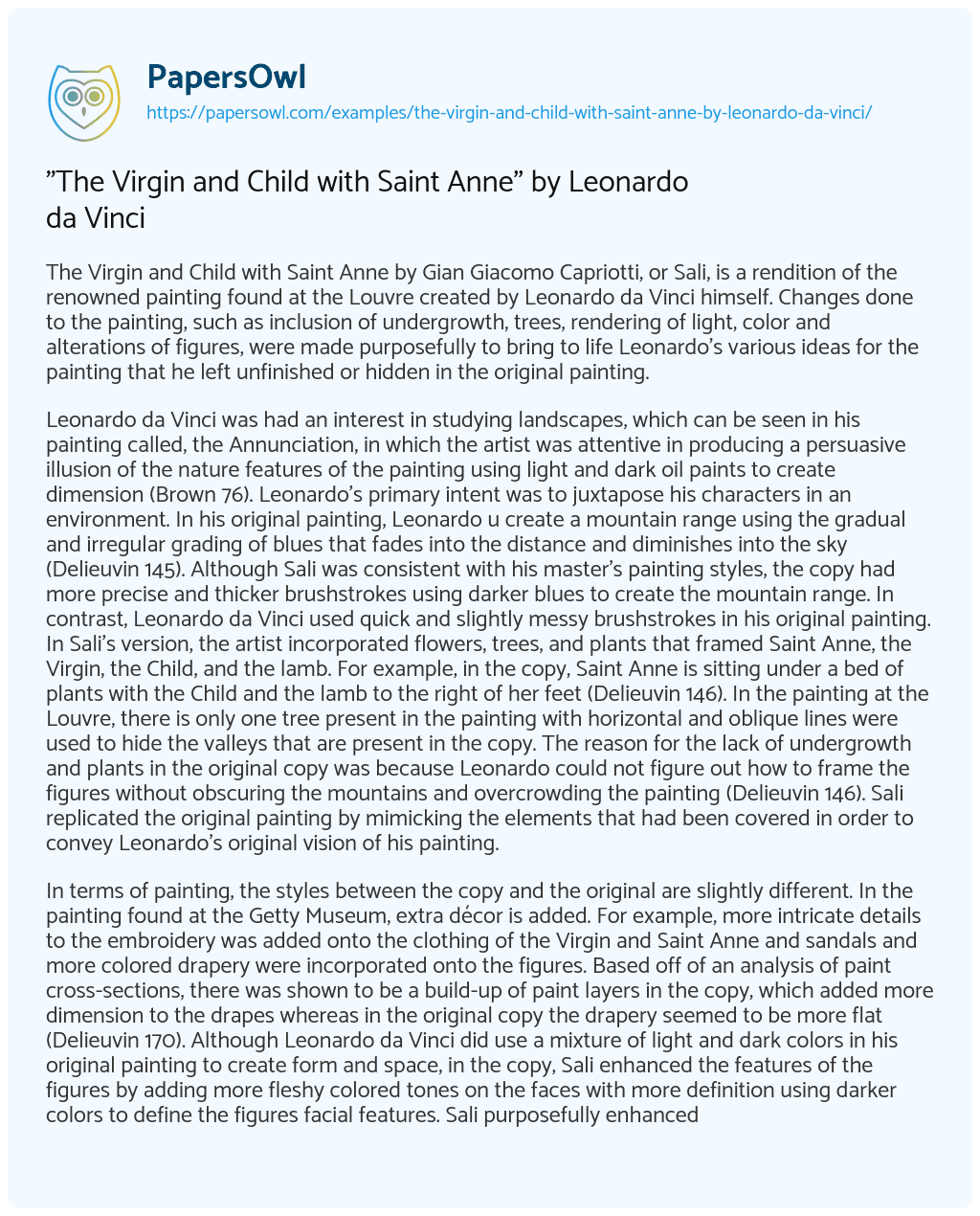 The Virgin and Child with Saint Anne by Gian Giacomo Capriotti, or Sali, is a rendition of the renowned painting found at the Louvre created by Leonardo da Vinci himself. Changes done to the painting, such as inclusion of undergrowth, trees, rendering of light, color and alterations of figures, were made purposefully to bring to life Leonardo’s various ideas for the painting that he left unfinished or hidden in the original painting.

Leonardo da Vinci was had an interest in studying landscapes, which can be seen in his painting called, the Annunciation, in which the artist was attentive in producing a persuasive illusion of the nature features of the painting using light and dark oil paints to create dimension (Brown 76). Leonardo’s primary intent was to juxtapose his characters in an environment. In his original painting, Leonardo u create a mountain range using the gradual and irregular grading of blues that fades into the distance and diminishes into the sky (Delieuvin 145). Although Sali was consistent with his master’s painting styles, the copy had more precise and thicker brushstrokes using darker blues to create the mountain range. In contrast, Leonardo da Vinci used quick and slightly messy brushstrokes in his original painting. In Sali’s version, the artist incorporated flowers, trees, and plants that framed Saint Anne, the Virgin, the Child, and the lamb. For example, in the copy, Saint Anne is sitting under a bed of plants with the Child and the lamb to the right of her feet (Delieuvin 146). In the painting at the Louvre, there is only one tree present in the painting with horizontal and oblique lines were used to hide the valleys that are present in the copy. The reason for the lack of undergrowth and plants in the original copy was because Leonardo could not figure out how to frame the figures without obscuring the mountains and overcrowding the painting (Delieuvin 146). Sali replicated the original painting by mimicking the elements that had been covered in order to convey Leonardo’s original vision of his painting.

In terms of painting, the styles between the copy and the original are slightly different. In the painting found at the Getty Museum, extra décor is added. For example, more intricate details to the embroidery was added onto the clothing of the Virgin and Saint Anne and sandals and more colored drapery were incorporated onto the figures. Based off of an analysis of paint cross-sections, there was shown to be a build-up of paint layers in the copy, which added more dimension to the drapes whereas in the original copy the drapery seemed to be more flat (Delieuvin 170). Although Leonardo da Vinci did use a mixture of light and dark colors in his original painting to create form and space, in the copy, Sali enhanced the features of the figures by adding more fleshy colored tones on the faces with more definition using darker colors to define the figures facial features. Sali purposefully enhanced Leonardo’s original painting, under his supervision, in order to improve particular elements of the painting.

In the Burlington House Cartoon, Leonardo created a composition that included Saint Anne, the Virgin, Saint John, and the Child. This original sketch of the composition represented Leonardo’s intent on displaying a situation that is able to unify figures of different sizes in a pyramid form. An interesting aspect of the sketch is that in the copy and original painting, a lamb replaces Saint John. This seems to be purposeful because Leonardo da Vinci believed that the incarnation of God (through the Child) took place on Earth. In order to incorporate this story into the real world, Leonardo added symbolic elements of the water and lamb to symbolize baptism, trees to symbolize Saint Anne’s family tree, and the mountains to symbolize Mary’s Immaculate Conception.

Although at first glance, the copy and the original seem to be quite similar, there are extra details added that enhanced the visual elements of the painting. Although initially, the added elements seemed to completely defy Leonardo da Vinci’s original intent with the painting, the copy itself actually carried out the artist’s original intent with his painting and incorporated elements that he failed to put in the original. The addition of flowers, plants, and trees were incorporated into frame the figures in a tasteful way that did not overcrowd the figures. In terms of painting, the copy included extra ornamentations and defined the facial features of the figures that made the painting seem more realistic. Lastly, the replacement of Saint John, found in the Burlington House Cartoon, with the lamb brought to light the symbolic elements that Leonardo intended on adding in order to bring the biblical stories into the real world. The adjustments made in the copy were tastefully and purposefully done in order to showcase the painting that Leonardo da Vinci could not create.

"The Virgin and Child with Saint Anne" by Leonardo da Vinci. (2019, Nov 07). Retrieved from https://papersowl.com/examples/the-virgin-and-child-with-saint-anne-by-leonardo-da-vinci/