Childhood Poverty and its Physical Effects 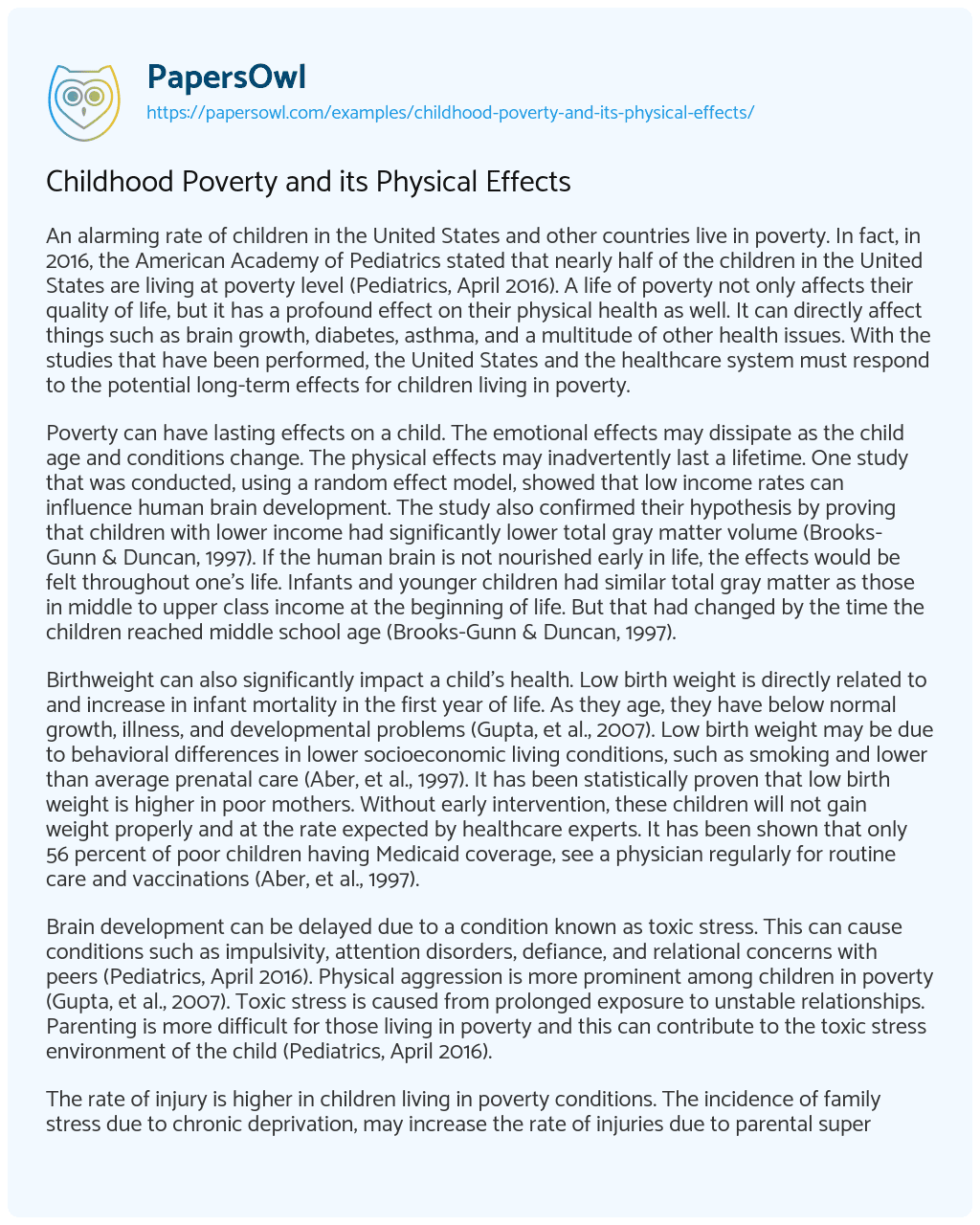 An alarming rate of children in the United States and other countries live in poverty. In fact, in 2016, the American Academy of Pediatrics stated that nearly half of the children in the United States are living at poverty level (Pediatrics, April 2016). A life of poverty not only affects their quality of life, but it has a profound effect on their physical health as well. It can directly affect things such as brain growth, diabetes, asthma, and a multitude of other health issues. With the studies that have been performed, the United States and the healthcare system must respond to the potential long-term effects for children living in poverty.

Poverty can have lasting effects on a child. The emotional effects may dissipate as the child age and conditions change. The physical effects may inadvertently last a lifetime. One study that was conducted, using a random effect model, showed that low income rates can influence human brain development. The study also confirmed their hypothesis by proving that children with lower income had significantly lower total gray matter volume (Brooks-Gunn & Duncan, 1997). If the human brain is not nourished early in life, the effects would be felt throughout one’s life. Infants and younger children had similar total gray matter as those in middle to upper class income at the beginning of life. But that had changed by the time the children reached middle school age (Brooks-Gunn & Duncan, 1997).

Birthweight can also significantly impact a child’s health. Low birth weight is directly related to and increase in infant mortality in the first year of life. As they age, they have below normal growth, illness, and developmental problems (Gupta, et al., 2007). Low birth weight may be due to behavioral differences in lower socioeconomic living conditions, such as smoking and lower than average prenatal care (Aber, et al., 1997). It has been statistically proven that low birth weight is higher in poor mothers. Without early intervention, these children will not gain weight properly and at the rate expected by healthcare experts. It has been shown that only 56 percent of poor children having Medicaid coverage, see a physician regularly for routine care and vaccinations (Aber, et al., 1997).

Brain development can be delayed due to a condition known as toxic stress. This can cause conditions such as impulsivity, attention disorders, defiance, and relational concerns with peers (Pediatrics, April 2016). Physical aggression is more prominent among children in poverty (Gupta, et al., 2007). Toxic stress is caused from prolonged exposure to unstable relationships. Parenting is more difficult for those living in poverty and this can contribute to the toxic stress environment of the child (Pediatrics, April 2016).

The rate of injury is higher in children living in poverty conditions. The incidence of family stress due to chronic deprivation, may increase the rate of injuries due to parental supervision and mental health (Gupta, et al., 2007). Injury can also be related to where a low-income child resides. In such neighborhoods, the child is at greater risk of encountering a violent situation and unavailability of safe recreational areas (Gupta, et al., 2007). It has also been shown that children in poverty have more injuries due to physical abuse and/or neglect (Aber, et al., 1997).

According to a Canadian study, asthma is the most common chronic childhood condition. The study also found that there are definite disparities in the socioeconomic status of children and the ones receiving treatment. This study even found that the longer a child lives in poverty, the risk of asthma increased, which causes more hospitalizations and disability (Gupta, et al., 2007). Timeliness of care has been shown to be a factor in low socioeconomic situations. There is a higher incidence of otitis media, and left untreated, can lead to hearing loss for children in poverty (Aber, et al., 1997).

Obesity is also a concern in lower socioeconomic situations and has shown higher proportions of children that are obese. Obesity can lead to a multitude of health conditions such as diabetes, poor self-esteem, and asthma (Gupta, et al., 2007). Unhealthy foods are cheaper to buy and that can be a contributing factor. Fresh fruits and vegetables are more expensive and take longer to prepare. For a child whose parent/parents work more than one job, a quick, easy meal is usually not as healthy. Children living in low socioeconomic neighborhoods typically do not have access to a safe playground or park. This can create yet another barrier in maintaining a healthy weight (Gupta, et al., 2007).

Since childhood poverty can create a multitude of health concerns in the United States, there have been several studies performed, but now it is time for action. One of the questions that arose was, “How can this be the wealthiest country in the world when one in four of America’s children has been living in poverty for over four decades?” said plenary Co-Chair Thomas K. McInerny, MD, FAAP, president of the American Academy of Pediatrics (AAP) (Gupta, et al., 2007). There have been a multitude of responses to this question and although we have strived for improvement, though healthcare reform and other opportunities, we haven’t eliminated the concern.

“The American Academy of Pediatrics considers child poverty in the United States unacceptable and detrimental to the health and well-being of children and is committed to its elimination.” (Pediatrics, April 2006). Another physician, Dr. Chung stated, “Pediatricians simply can’t reach their full potential as health care providers when we have not real strategy to help address the most important childhood drivers of lifelong poor health, such as poverty.” (Pediatric Academic Societies, 2013). One of the improvements included a medical home model, or care coordination, that allows families connection to resources to address energy and food security. College volunteers are utilized by social services to reduce social barriers for maintaining a healthy environment (Pediatrics, April 2006).

With the introduction of healthcare reform, identifying health barriers for children in poverty situations, is essential to allow the early interventional strategies. This may include preventative services, nutritional supplements, learning opportunities, and socioemotional support for parents (Pediatrics, April 2006). There is a push for the health care system to improve quality while keeping costs contained. There are some amazing opportunities to restructure health care delivery for poor children and their families, such as incentivizing care coordination and home visits (Pediatrics, April 2006).

Improved access to comprehensive care might be the key to success. Comprehensive care does not just treat the condition but takes care of other needs that might be indirectly associated with the condition. Nutritional support is one way to address a need for low-socioeconomic families. There has been a program in place for a while called WIC, or the Supplemental Nutrition Program for Women, Infants, and Children. WIC’s main goal is to improve the health of low-income women, infants, and children (Gupta, et al., 2007). WIC provides education and growth monitoring of children, while providing health nutritional resources and promotion of breastfeeding for infants (Gupta, et al., 2007).

The National School Lunch Program provides low-cost or free lunches to children in need during the school year and on a limited basis during the summer. In 2012, 31.6 million children were served each day at a cost of 11.6 billion dollars (Gupta, et al., 2007). A more recent analysis estimates that almost half of the school age children qualify for free lunches. Food assistance is also provided to low-income families, but it is not as restricted as WIC, which can lead to more unhealthy purchases (Gupta, et al., 2007).

The United States has responded to these challenges through healthcare reform. There is an expansion in the Medicaid program to ensure there is healthcare coverage for poor children, increased its benefits, and allowed for greater access to health services. The government has also implemented programs such as patient-centered medical homes, team approaches, and expansion of care management (Racine, 2015). There has also been a series of experiments involving concentrating on specific, high-risk populations, and enhanced or improved reporting. Pediatric practices have implemented strategies to improve identifying children in these low-socioeconomic situations, and intervening at an earlier stage (Racine, 2015).

Childhood poverty was not a widely accepted term to discuss in public. However, with healthcare reform, the topic has come into the spotlight. Advocacy efforts are underway and that has led to conversations such as increasing the minimum wage, expansion of tax credits, paid family leave, and preschool education (Racine, 2015). One problem is the identification of children in need. Most pediatricians will only have contact with them when another condition presents itself. Physicians must recognize the importance of poverty and the medical concerns that arise from this. They must identify and make appropriate referrals to services that can help them (Racine, 2015).

In Racine’s article, he suggests that “if poverty were a disease, the health care system would be at present consigned to approaching it from the advantage point of secondary or tertiary prevention…” (Racine, 2015). Prevention of lifelong disease, related to poverty, must be identified early. Intervention must occur. While these programs all cost money, one estimate says that the United States economy would save around $500 billion each year if childhood poverty were eliminated (Racine, 2015). Even if money was not a factor that would drive this incentive, as a society, it is just the right thing to do.

Childhood Poverty and its Physical Effects. (2019, Nov 06). Retrieved from https://papersowl.com/examples/childhood-poverty-and-its-physical-effects/

The Cause and Effect of Childhood Physical Abuse in the Home