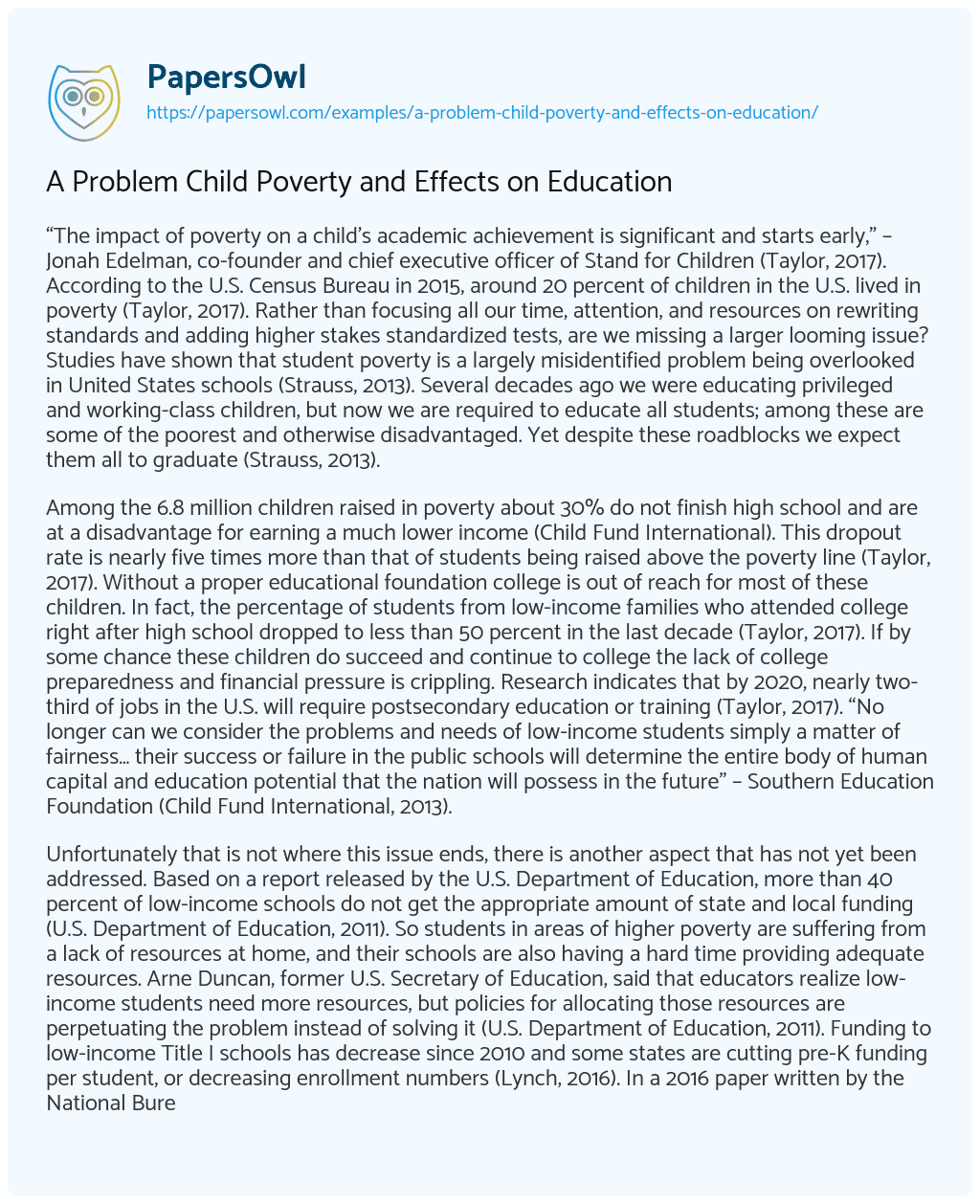 “The impact of poverty on a child’s academic achievement is significant and starts early,” – Jonah Edelman, co-founder and chief executive officer of Stand for Children (Taylor, 2017). According to the U.S. Census Bureau in 2015, around 20 percent of children in the U.S. lived in poverty (Taylor, 2017). Rather than focusing all our time, attention, and resources on rewriting standards and adding higher stakes standardized tests, are we missing a larger looming issue? Studies have shown that student poverty is a largely misidentified problem being overlooked in United States schools (Strauss, 2013). Several decades ago we were educating privileged and working-class children, but now we are required to educate all students; among these are some of the poorest and otherwise disadvantaged. Yet despite these roadblocks we expect them all to graduate (Strauss, 2013).

Among the 6.8 million children raised in poverty about 30% do not finish high school and are at a disadvantage for earning a much lower income (Child Fund International). This dropout rate is nearly five times more than that of students being raised above the poverty line (Taylor, 2017). Without a proper educational foundation college is out of reach for most of these children. In fact, the percentage of students from low-income families who attended college right after high school dropped to less than 50 percent in the last decade (Taylor, 2017). If by some chance these children do succeed and continue to college the lack of college preparedness and financial pressure is crippling. Research indicates that by 2020, nearly two-third of jobs in the U.S. will require postsecondary education or training (Taylor, 2017). “No longer can we consider the problems and needs of low-income students simply a matter of fairness… their success or failure in the public schools will determine the entire body of human capital and education potential that the nation will possess in the future” – Southern Education Foundation (Child Fund International, 2013).

Unfortunately that is not where this issue ends, there is another aspect that has not yet been addressed. Based on a report released by the U.S. Department of Education, more than 40 percent of low-income schools do not get the appropriate amount of state and local funding (U.S. Department of Education, 2011). So students in areas of higher poverty are suffering from a lack of resources at home, and their schools are also having a hard time providing adequate resources. Arne Duncan, former U.S. Secretary of Education, said that educators realize low-income students need more resources, but policies for allocating those resources are perpetuating the problem instead of solving it (U.S. Department of Education, 2011). Funding to low-income Title I schools has decrease since 2010 and some states are cutting pre-K funding per student, or decreasing enrollment numbers (Lynch, 2016). In a 2016 paper written by the National Bureau of Economic Research (NBER) showed that investing more money in low-income districts led to significant improvements in student outcomes; which then lead to higher levels of education and income for those students (Taylor, 2017).

While the current U.S. economy is improving, child poverty and public school funding are still large issues plaguing children in the United States school system. We need to allow students the opportunity for advancement, despite their socioeconomic status. Because how can we expect children to succeed or close the achievement gap without the necessary resources to do so? It is time to get back to what matter the most, the education of our future world leaders. “There are school that teach us every day that these children absolutely can achieve at the same high levels as anybody else … however, everyone involved has to organize around that mission.” – Kati Haycock, president and CEO of The Education Trust (Taylor, 2017).

A Problem Child Poverty and Effects on Education. (2020, May 12). Retrieved from https://papersowl.com/examples/a-problem-child-poverty-and-effects-on-education/

How does Poverty Impact a Child’s Education?

The Effect of Poverty on Child Development