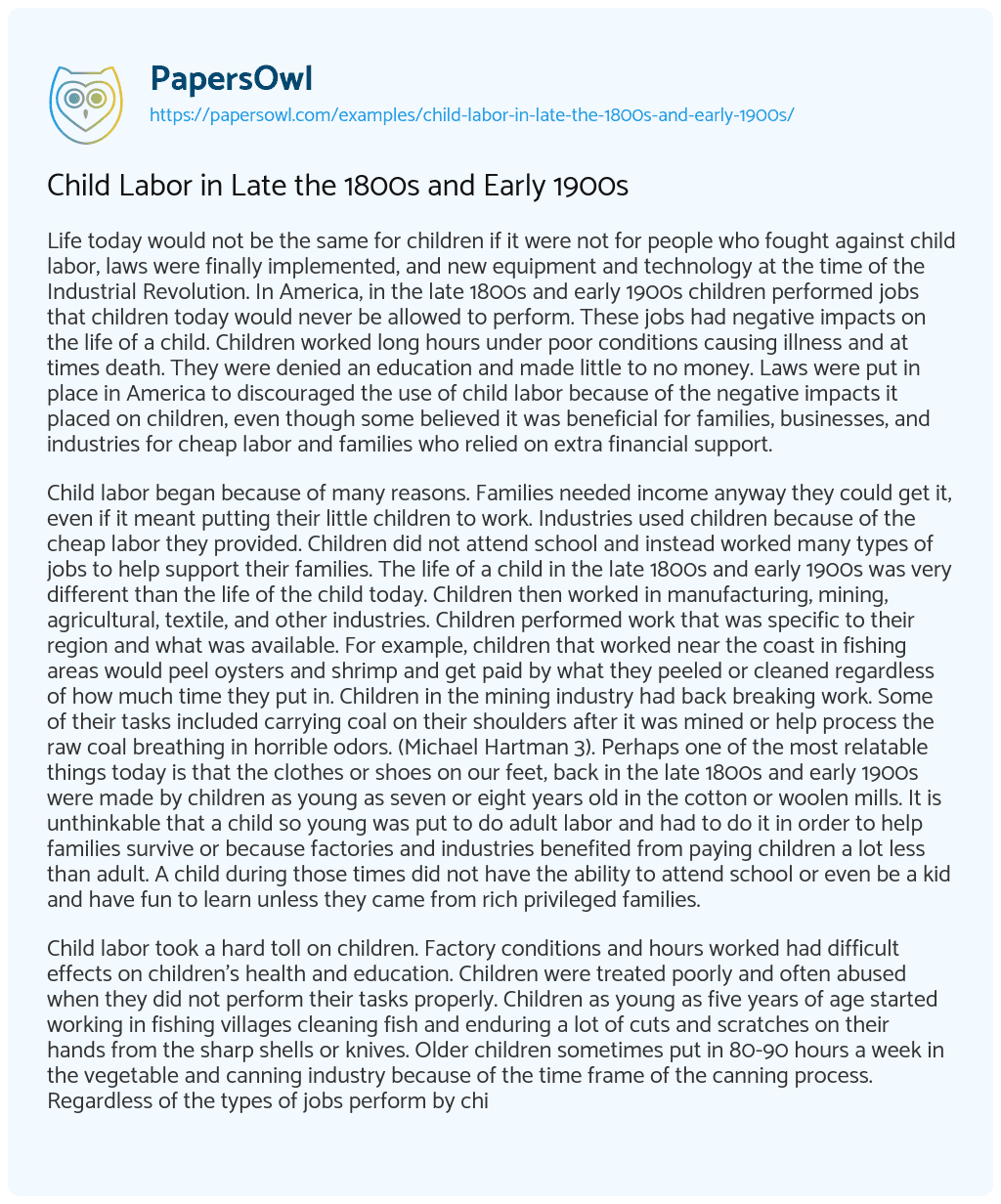 Life today would not be the same for children if it were not for people who fought against child labor, laws were finally implemented, and new equipment and technology at the time of the Industrial Revolution. In America, in the late 1800s and early 1900s children performed jobs that children today would never be allowed to perform. These jobs had negative impacts on the life of a child. Children worked long hours under poor conditions causing illness and at times death. They were denied an education and made little to no money. Laws were put in place in America to discouraged the use of child labor because of the negative impacts it placed on children, even though some believed it was beneficial for families, businesses, and industries for cheap labor and families who relied on extra financial support.

Child labor began because of many reasons. Families needed income anyway they could get it, even if it meant putting their little children to work. Industries used children because of the cheap labor they provided. Children did not attend school and instead worked many types of jobs to help support their families. The life of a child in the late 1800s and early 1900s was very different than the life of the child today. Children then worked in manufacturing, mining, agricultural, textile, and other industries. Children performed work that was specific to their region and what was available. For example, children that worked near the coast in fishing areas would peel oysters and shrimp and get paid by what they peeled or cleaned regardless of how much time they put in. Children in the mining industry had back breaking work. Some of their tasks included carrying coal on their shoulders after it was mined or help process the raw coal breathing in horrible odors. (Michael Hartman 3). Perhaps one of the most relatable things today is that the clothes or shoes on our feet, back in the late 1800s and early 1900s were made by children as young as seven or eight years old in the cotton or woolen mills. It is unthinkable that a child so young was put to do adult labor and had to do it in order to help families survive or because factories and industries benefited from paying children a lot less than adult. A child during those times did not have the ability to attend school or even be a kid and have fun to learn unless they came from rich privileged families.

Child labor took a hard toll on children. Factory conditions and hours worked had difficult effects on children’s health and education. Children were treated poorly and often abused when they did not perform their tasks properly. Children as young as five years of age started working in fishing villages cleaning fish and enduring a lot of cuts and scratches on their hands from the sharp shells or knives. Older children sometimes put in 80-90 hours a week in the vegetable and canning industry because of the time frame of the canning process. Regardless of the types of jobs perform by children most children had worked eleven-twelve hours days six days a week with less than one hour breaks in a day (Child Labor 6). Wages varied but children were paid little to nothing and were lucky to see one dollar per week. Not only were the hours long and the pay little but conditions were poor and unhealthy. Children worked in dark dirty environments with little ventilation or clean air. Many stood on hard pavement all day which caused leg and joint pain. Injuries and being killed by dangerous equipment was something often seen. Children became ill from disease or suffered long lasting side effects because of working conditions. For example, children who worked in the coal mines were always breathing in coal dust which caused lung disease and damage. Lastly children were often physically or verbally abused for being late or not doing their work properly. An example is something called being “weighted”. “Weighted means having a heavy weight tied onto or around a child’s neck and they would have to pace the factory aisle so other children could see thy were being punished.” (Child Labor in Factories 2). Children were also beaten and stripped of their clothing to embarrass them. All of these things occurred because there were no rules or regulations in place to protect children’s rights. During the late 1800’s early 1900’s children made up to 20% of the workforce. Instead of being in school learning to read and write, they were in factories and fields helping support their families and making little to no money.

Difficult financial times for families and cheap labor for factories are a few of the things that kept child labor going. However people started to take notice of the poor working conditions and danger that children were facing because of no government regulations that would enforce safety standards. Child labor had spread across the nation and it came to a point that it could no longer be ignored. There were people who still favored child labor like families who needed the finances and factories owners who benefited from the cheap labor so getting things changed was a challenge. Teachers, women, ministers and social workers joined together on April 25, 1904 and formed the National Child Labor Committee. The committee’s purpose was “promoting the rights, awareness, dignity, well being and education of children,and youth as they relate to work and working.” (Catherine A. Paul 5). This committee helped open the eyes of many about the need for child labor reform. They hired Lewis Wickes Hine a photographer who snuck into factories or places where children worked to capture images of the horrible things and conditions children dealt with. These images helped change the minds of people about child labor. Reform movements tried to put an end to children under sixteen years of age to work. In 1912, nine states had laws stating that children had to be fourteen years old to work in factories. It did not allow children under sixteen to work in mills and allowed an 8 hour work day for children fourteen-sixteen. Other states at the time had different rules. Some states still allowed children under fourteen to work and other states did not put a restriction on the amount of hours worked by a child in a day or week. Many states didn’t even require proof of age. It was not until 1924 after many attempts and a Supreme Court hearing about child labor failed that the Child Labor Amendment was passed but still not ratified til this day. The amendment proposes to regulate “labor of persons under eighteen years of age”. Many states have ratified this amendment but it has not been ratified by ¾ of the states to pass. It wasn’t until 1938 when congress passed the Fair Labor Standards Act which had enforced federal regulations of child labor that changes had taken place. This act is also yet to be ratified. Even though, many fought for changes in child labor, it was a difficult task to accomplish.

In the late 1800s and early 1900s laws were put in place in America to discourage the use of child labor because of the negative impacts on children. Even though some believed it was beneficial for families, businesses and industries. These laws and regulations took time and much debate in order to protect the welfare of children. The life of a poor child then, was far more difficult than today. Harsh treatment, poor working conditions, and little pay while keeping the children away from an education was wrong. With the persistence of groups like the National

Child Labor Committee and leaders of the community at that time, things might not have changed.