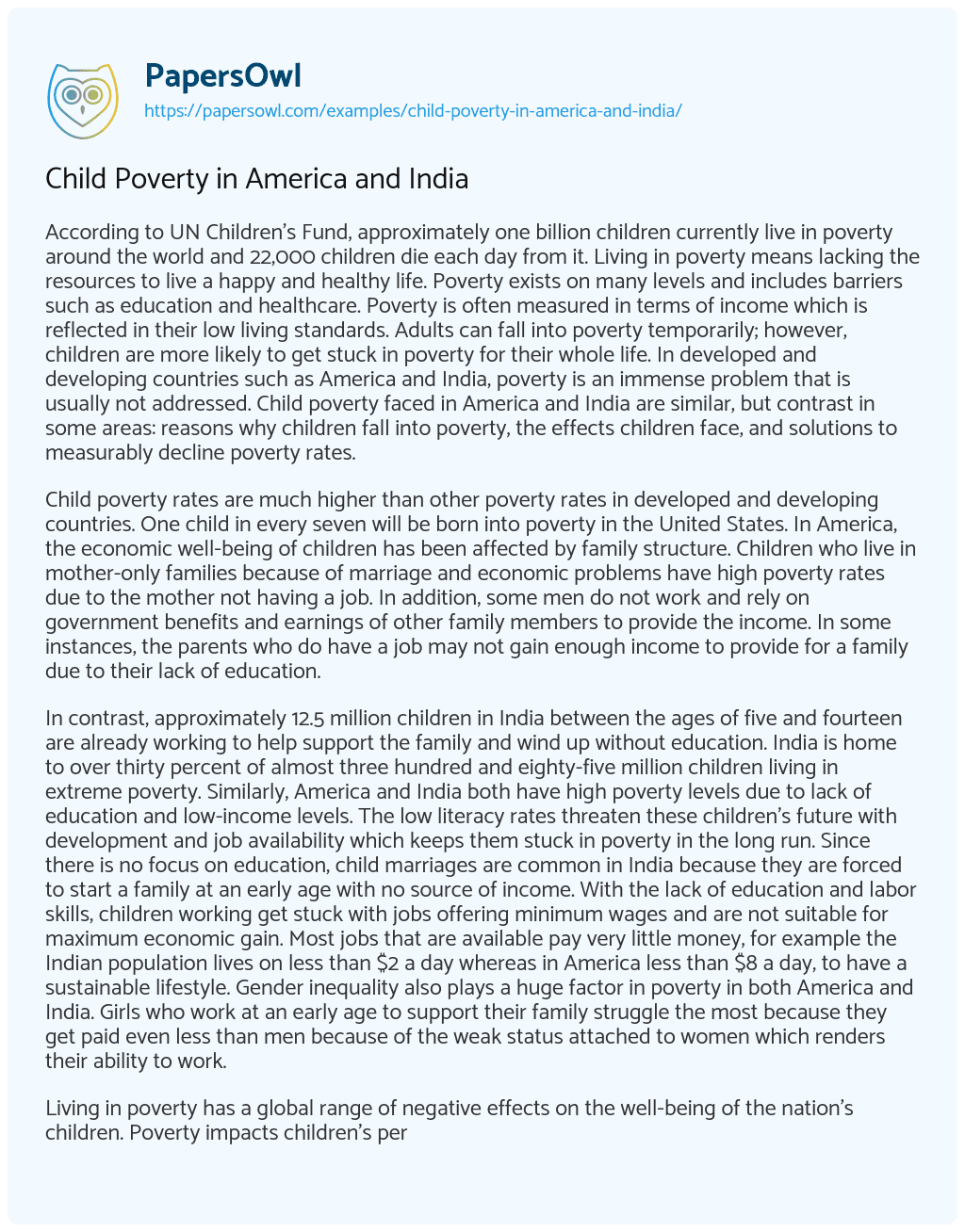 According to UN Children’s Fund, approximately one billion children currently live in poverty around the world and 22,000 children die each day from it. Living in poverty means lacking the resources to live a happy and healthy life. Poverty exists on many levels and includes barriers such as education and healthcare. Poverty is often measured in terms of income which is reflected in their low living standards. Adults can fall into poverty temporarily; however, children are more likely to get stuck in poverty for their whole life. In developed and developing countries such as America and India, poverty is an immense problem that is usually not addressed. Child poverty faced in America and India are similar, but contrast in some areas: reasons why children fall into poverty, the effects children face, and solutions to measurably decline poverty rates.

Child poverty rates are much higher than other poverty rates in developed and developing countries. One child in every seven will be born into poverty in the United States. In America, the economic well-being of children has been affected by family structure. Children who live in mother-only families because of marriage and economic problems have high poverty rates due to the mother not having a job. In addition, some men do not work and rely on government benefits and earnings of other family members to provide the income. In some instances, the parents who do have a job may not gain enough income to provide for a family due to their lack of education.

In contrast, approximately 12.5 million children in India between the ages of five and fourteen are already working to help support the family and wind up without education. India is home to over thirty percent of almost three hundred and eighty-five million children living in extreme poverty. Similarly, America and India both have high poverty levels due to lack of education and low-income levels. The low literacy rates threaten these children’s future with development and job availability which keeps them stuck in poverty in the long run. Since there is no focus on education, child marriages are common in India because they are forced to start a family at an early age with no source of income. With the lack of education and labor skills, children working get stuck with jobs offering minimum wages and are not suitable for maximum economic gain. Most jobs that are available pay very little money, for example the Indian population lives on less than $2 a day whereas in America less than $8 a day, to have a sustainable lifestyle. Gender inequality also plays a huge factor in poverty in both America and India. Girls who work at an early age to support their family struggle the most because they get paid even less than men because of the weak status attached to women which renders their ability to work.

Living in poverty has a global range of negative effects on the well-being of the nation’s children. Poverty impacts children’s performance in school and home. Furthermore, children in America and India have to experience the effects of being in poverty. In America, the federal spending decreased by ten percent for child education, nutrition, social services, and care. They suffer the negative conditions that are linked to poverty such as homelessness, lack of healthcare, inadequate nutrition, and lack of education. Poor children are at risk for negative outcomes: low reading and math skills, physical and mental health problems, and emotional and behavioral problems. Due to this, children experience higher levels of depression which can be linked to poor academic performances and developmental delays. India experiences the same effects; however, for different reasons. India is exposed to poor hygiene conditions which are causes of disease such as cholera and causes children to suffer and die. The extremely poor areas of India live without sufficient drinking water supply, garbage disposal, and electricity. Most children in poverty cannot gain an education because there is no established school system. Currently, 2.7 million children are not gaining an education due to the lack of schools and proper resources. Both America and India experience the problem of malnutrition. It is widespread in all age groups, but children are most affected by this. Malnutrition affects their ability to work leading to a decrease in income. The physical and mental effects on children in both America and India puts a negative strain on their already low income because they cannot afford health care.

Poverty can never fully be eliminated, but there are solutions to significantly reduce child poverty rates. In 2016, America experienced a 15.6 percent decline in poverty rates due to higher wages in the labor market while India had a decline of 12.4 percent. The development of education in both America and India will empower children to engage in higher paying jobs, which in turn will help lift them above the poverty line. Education for women is also crucial because they shape their children’s progress in development and education. Education is an important investment that both countries can make because it will promote peace, gender equality, and reduce child marriages. The positive outcome of increased education is higher income and a boost in economic growth. Working families sometimes cannot afford to raise their children and stronger wages is the solution to the problem. Raising minimum wage can reduce child poverty by four percent according to the Children’s Defense Fund report. That is approximately 400,000 children that would be out of poverty. In America, the decline in family size can reduce rates because a family can only support a certain amount of children with little income. A decline in family size will allow children in those families to live a better lifestyle and gain educational opportunities. In India, children suffer medically because they have no access to health care. The diseases that are exposed to those kids causes them to suffer and sometimes leads to death. With improved healthcare facilities and healthcare system, many children will not suffer at a young age while fighting poverty. Government plays the most crucial role in declining child poverty rates. None of these changes can be made without the interference of the government. The government has the initiative to put more money in the national budget for kids and to help fund programs to lift children out of poverty in areas of education and healthcare. These steps can significantly help children escape poverty and decline in poverty rates that will push economic growth.

Child Poverty in America and India. (2019, Aug 08). Retrieved from https://papersowl.com/examples/child-poverty-in-america-and-india/

The Effect of Poverty on Child Development

How does Poverty Impact a Child’s Education?