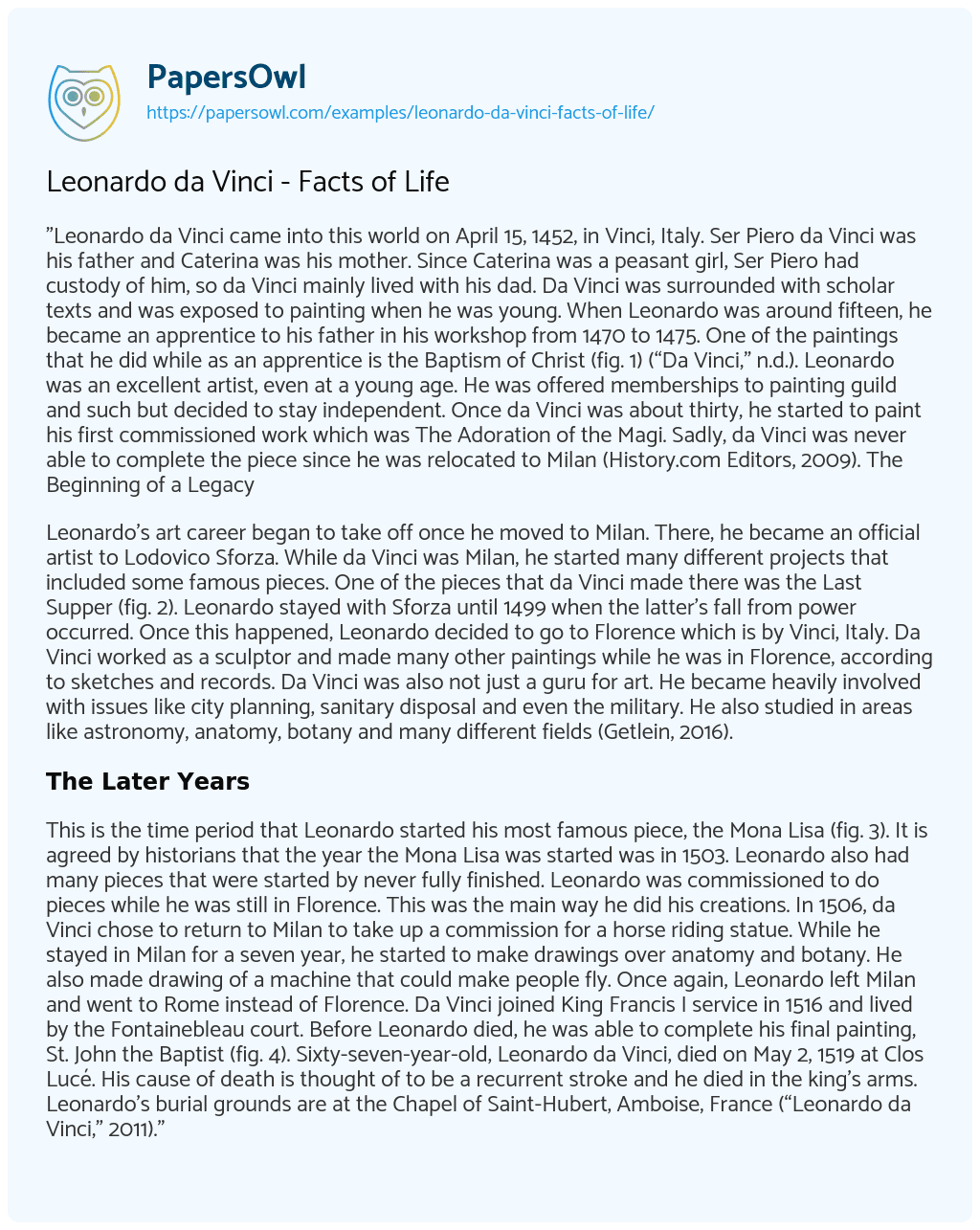 “Leonardo da Vinci came into this world on April 15, 1452, in Vinci, Italy. Ser Piero da Vinci was his father and Caterina was his mother. Since Caterina was a peasant girl, Ser Piero had custody of him, so da Vinci mainly lived with his dad. Da Vinci was surrounded with scholar texts and was exposed to painting when he was young. When Leonardo was around fifteen, he became an apprentice to his father in his workshop from 1470 to 1475. One of the paintings that he did while as an apprentice is the Baptism of Christ (fig. 1) (“Da Vinci,” n.d.). Leonardo was an excellent artist, even at a young age. He was offered memberships to painting guild and such but decided to stay independent. Once da Vinci was about thirty, he started to paint his first commissioned work which was The Adoration of the Magi. Sadly, da Vinci was never able to complete the piece since he was relocated to Milan (History.com Editors, 2009). The Beginning of a Legacy

Leonardo’s art career began to take off once he moved to Milan. There, he became an official artist to Lodovico Sforza. While da Vinci was Milan, he started many different projects that included some famous pieces. One of the pieces that da Vinci made there was the Last Supper (fig. 2). Leonardo stayed with Sforza until 1499 when the latter’s fall from power occurred. Once this happened, Leonardo decided to go to Florence which is by Vinci, Italy. Da Vinci worked as a sculptor and made many other paintings while he was in Florence, according to sketches and records. Da Vinci was also not just a guru for art. He became heavily involved with issues like city planning, sanitary disposal and even the military. He also studied in areas like astronomy, anatomy, botany and many different fields (Getlein, 2016).

This is the time period that Leonardo started his most famous piece, the Mona Lisa (fig. 3). It is agreed by historians that the year the Mona Lisa was started was in 1503. Leonardo also had many pieces that were started by never fully finished. Leonardo was commissioned to do pieces while he was still in Florence. This was the main way he did his creations. In 1506, da Vinci chose to return to Milan to take up a commission for a horse riding statue. While he stayed in Milan for a seven year, he started to make drawings over anatomy and botany. He also made drawing of a machine that could make people fly. Once again, Leonardo left Milan and went to Rome instead of Florence. Da Vinci joined King Francis I service in 1516 and lived by the Fontainebleau court. Before Leonardo died, he was able to complete his final painting, St. John the Baptist (fig. 4). Sixty-seven-year-old, Leonardo da Vinci, died on May 2, 1519 at Clos Lucé. His cause of death is thought of to be a recurrent stroke and he died in the king’s arms. Leonardo’s burial grounds are at the Chapel of Saint-Hubert, Amboise, France (“Leonardo da Vinci,” 2011).”

Leonardo Da Vinci and his Life