Concept of Sociology in Social Life 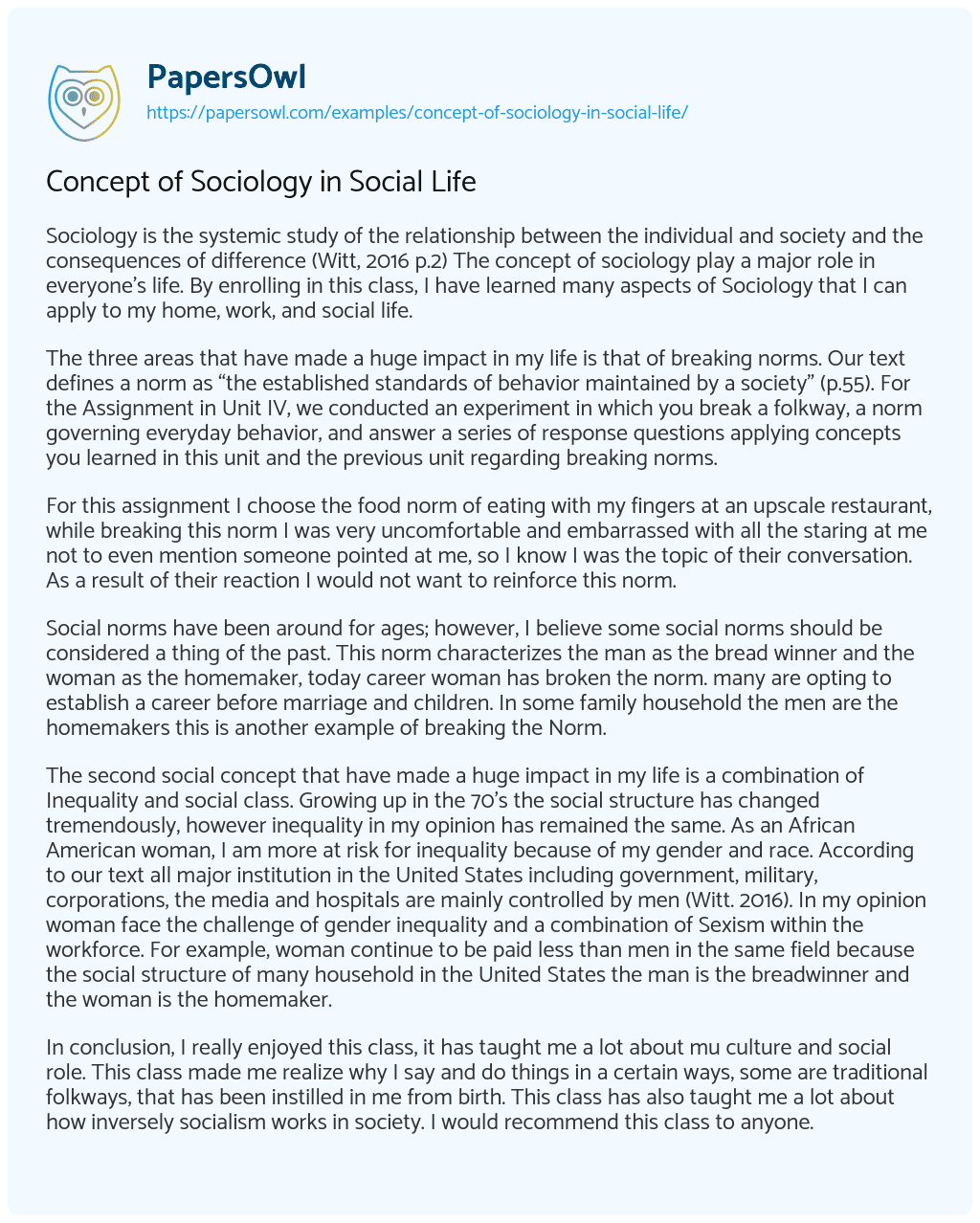 Sociology is the systemic study of the relationship between the individual and society and the consequences of difference (Witt, 2016 p.2) The concept of sociology play a major role in everyone’s life. By enrolling in this class, I have learned many aspects of Sociology that I can apply to my home, work, and social life.

The three areas that have made a huge impact in my life is that of breaking norms. Our text defines a norm as “the established standards of behavior maintained by a society” (p.55). For the Assignment in Unit IV, we conducted an experiment in which you break a folkway, a norm governing everyday behavior, and answer a series of response questions applying concepts you learned in this unit and the previous unit regarding breaking norms.

For this assignment I choose the food norm of eating with my fingers at an upscale restaurant, while breaking this norm I was very uncomfortable and embarrassed with all the staring at me not to even mention someone pointed at me, so I know I was the topic of their conversation. As a result of their reaction I would not want to reinforce this norm.

Social norms have been around for ages; however, I believe some social norms should be considered a thing of the past. This norm characterizes the man as the bread winner and the woman as the homemaker, today career woman has broken the norm. many are opting to establish a career before marriage and children. In some family household the men are the homemakers this is another example of breaking the Norm.

The second social concept that have made a huge impact in my life is a combination of Inequality and social class. Growing up in the 70’s the social structure has changed tremendously, however inequality in my opinion has remained the same. As an African American woman, I am more at risk for inequality because of my gender and race. According to our text all major institution in the United States including government, military, corporations, the media and hospitals are mainly controlled by men (Witt. 2016). In my opinion woman face the challenge of gender inequality and a combination of Sexism within the workforce. For example, woman continue to be paid less than men in the same field because the social structure of many household in the United States the man is the breadwinner and the woman is the homemaker.

Concept of Sociology in Social Life. (2021, Apr 21). Retrieved from https://papersowl.com/examples/concept-of-sociology-in-social-life/

Over the Past few Weeks of Sociology

What i Learned in Sociology

Most Important Concepts of Sociology