Sociology of Community and Sociological Perspective 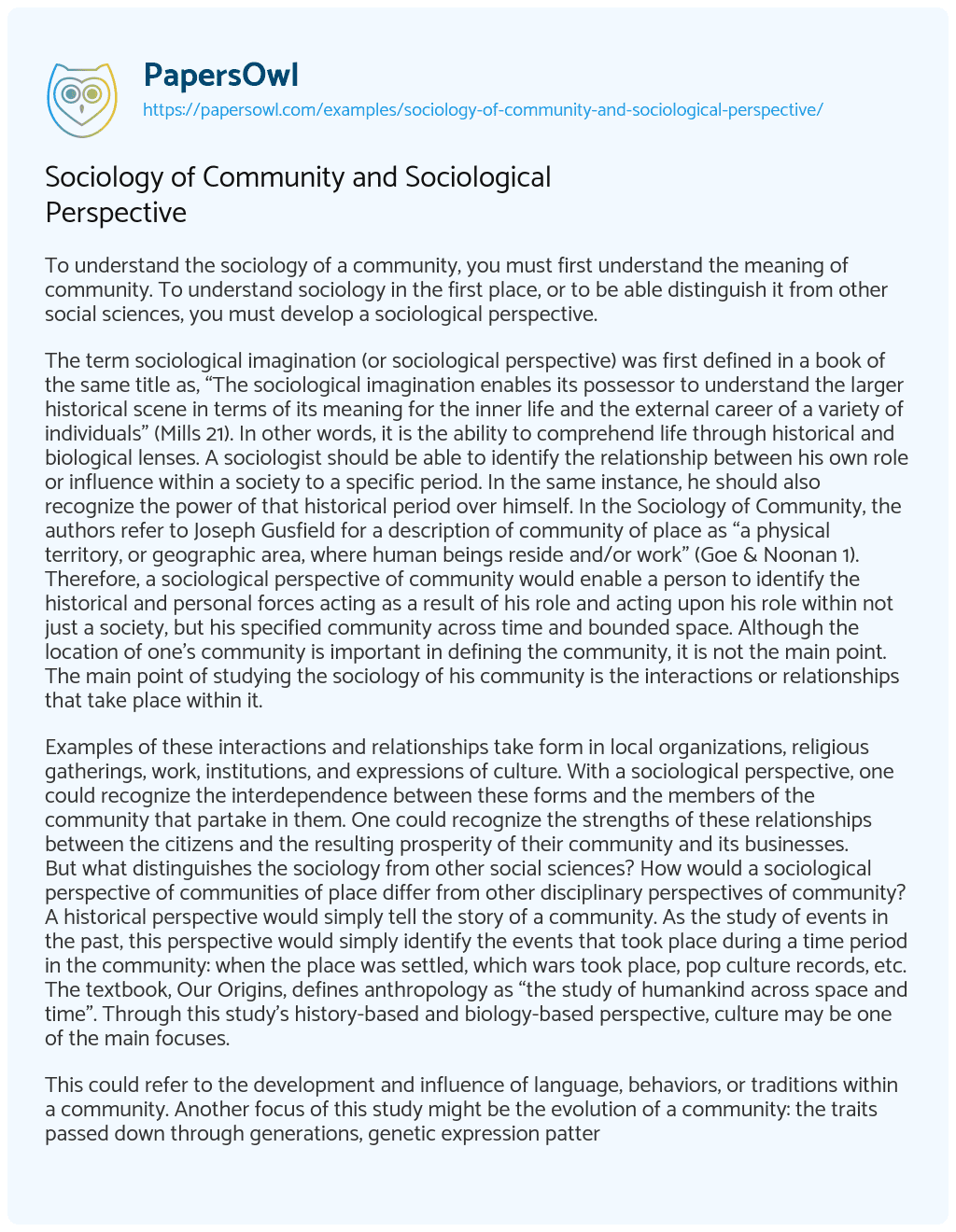 The term sociological imagination (or sociological perspective) was first defined in a book of the same title as, “The sociological imagination enables its possessor to understand the larger historical scene in terms of its meaning for the inner life and the external career of a variety of individuals” (Mills 21). In other words, it is the ability to comprehend life through historical and biological lenses. A sociologist should be able to identify the relationship between his own role or influence within a society to a specific period. In the same instance, he should also recognize the power of that historical period over himself. In the Sociology of Community, the authors refer to Joseph Gusfield for a description of community of place as “a physical territory, or geographic area, where human beings reside and/or work” (Goe & Noonan 1). Therefore, a sociological perspective of community would enable a person to identify the historical and personal forces acting as a result of his role and acting upon his role within not just a society, but his specified community across time and bounded space. Although the location of one’s community is important in defining the community, it is not the main point. The main point of studying the sociology of his community is the interactions or relationships that take place within it.

Examples of these interactions and relationships take form in local organizations, religious gatherings, work, institutions, and expressions of culture. With a sociological perspective, one could recognize the interdependence between these forms and the members of the community that partake in them. One could recognize the strengths of these relationships between the citizens and the resulting prosperity of their community and its businesses.
But what distinguishes the sociology from other social sciences? How would a sociological perspective of communities of place differ from other disciplinary perspectives of community? A historical perspective would simply tell the story of a community. As the study of events in the past, this perspective would simply identify the events that took place during a time period in the community: when the place was settled, which wars took place, pop culture records, etc. The textbook, Our Origins, defines anthropology as “the study of humankind across space and time”. Through this study’s history-based and biology-based perspective, culture may be one of the main focuses.

This could refer to the development and influence of language, behaviors, or traditions within a community. Another focus of this study might be the evolution of a community: the traits passed down through generations, genetic expression patterns, and the variation of a tribe or community of people. If anthropology is the “Who”, then the field psychology is like the “Why” of the social sciences. In an online dictionary, psychology is defined as “the science of mind and behavior; the mental or behavioral characteristics of an individual or group” (Merriam-Webster).

With a psychological perspective, these types of questions could be answered: Why do people act in the ways they do or what motivates them on an individual level? Compared to the sociological perspective, a psychological perspective would emphasize the mental state, characteristics, or internal drives of the individual members of the community. The sociological perspective would connect this collective psychology and relate it to larger scale communal society to demonstrate the strength of the social capital, human capital, and functional interdependence of the community. In a sense, the personal troubles of milieu versus public issues of social structure that Mills refers to when explaining the sociological imagination, highlight the difference between psychology and sociology respectively. As for another discipline, lecture slides from class list that the political economy approach to sociology of community includes “government, class, workers, [and] business” or the “links between production and place” (Dougherty). This financial and systematic perspective of community stresses the institutions, stratification, and the power of the citizens of a community as its vitality and stability hangs in the balance. The sociological perspective more so challenges the strength and functionality of such aspects.

It can be easy to confuse sociology with other similar disciplines. However, it is best to develop a sociological perspective. One who is equipped with such knowledge is not only conscious of the sciences, but conscious of his own role and environment.

Sociology of Community and Sociological Perspective. (2021, Apr 12). Retrieved from https://papersowl.com/examples/sociology-of-community-and-sociological-perspective/

The Sociological Perspective: the Promise

What is Sociological Imagination?