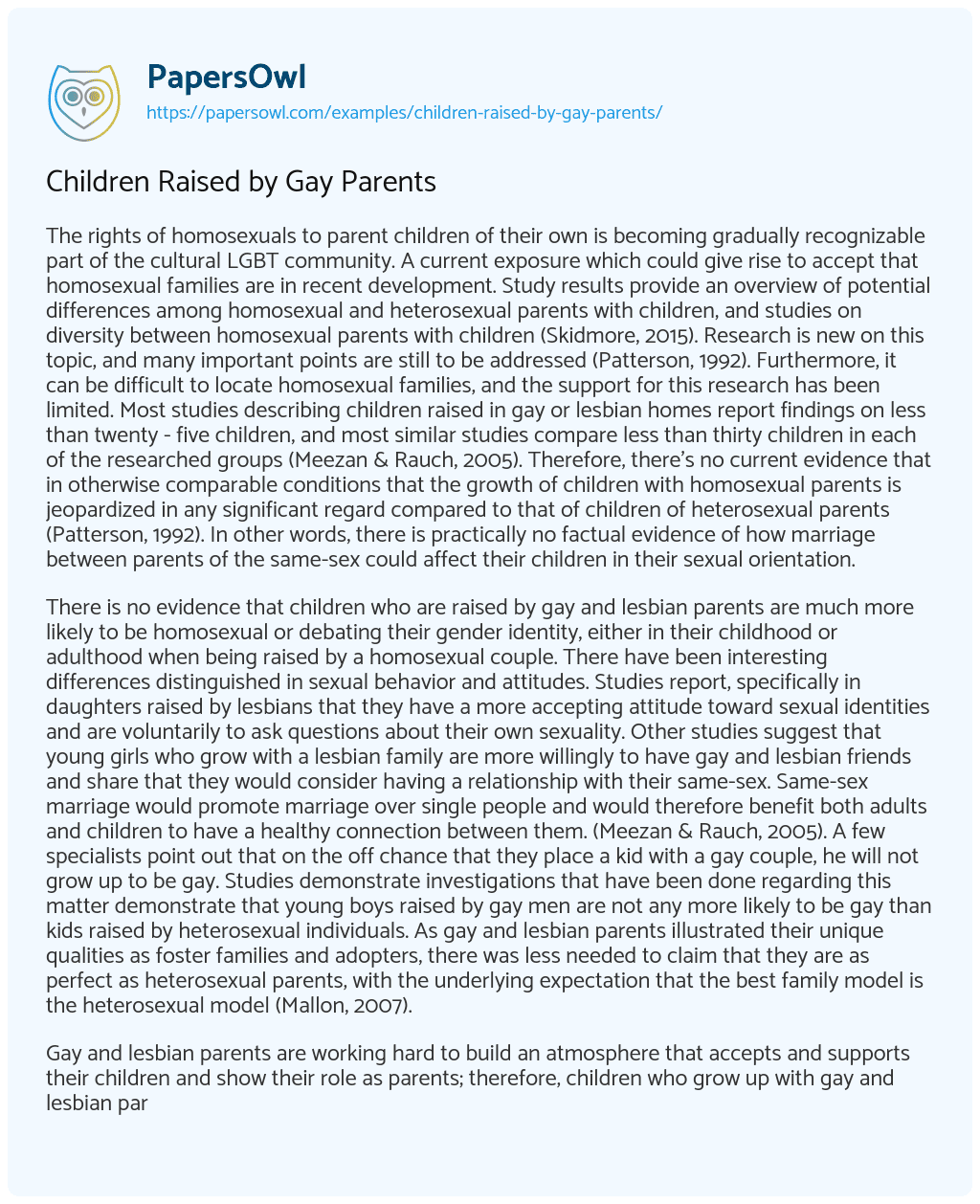 The rights of homosexuals to parent children of their own is becoming gradually recognizable part of the cultural LGBT community. A current exposure which could give rise to accept that homosexual families are in recent development. Study results provide an overview of potential differences among homosexual and heterosexual parents with children, and studies on diversity between homosexual parents with children (Skidmore, 2015). Research is new on this topic, and many important points are still to be addressed (Patterson, 1992). Furthermore, it can be difficult to locate homosexual families, and the support for this research has been limited. Most studies describing children raised in gay or lesbian homes report findings on less than twenty – five children, and most similar studies compare less than thirty children in each of the researched groups (Meezan & Rauch, 2005). Therefore, there’s no current evidence that in otherwise comparable conditions that the growth of children with homosexual parents is jeopardized in any significant regard compared to that of children of heterosexual parents (Patterson, 1992). In other words, there is practically no factual evidence of how marriage between parents of the same-sex could affect their children in their sexual orientation.

There is no evidence that children who are raised by gay and lesbian parents are much more likely to be homosexual or debating their gender identity, either in their childhood or adulthood when being raised by a homosexual couple. There have been interesting differences distinguished in sexual behavior and attitudes. Studies report, specifically in daughters raised by lesbians that they have a more accepting attitude toward sexual identities and are voluntarily to ask questions about their own sexuality. Other studies suggest that young girls who grow with a lesbian family are more willingly to have gay and lesbian friends and share that they would consider having a relationship with their same-sex. Same-sex marriage would promote marriage over single people and would therefore benefit both adults and children to have a healthy connection between them. (Meezan & Rauch, 2005). A few specialists point out that on the off chance that they place a kid with a gay couple, he will not grow up to be gay. Studies demonstrate investigations that have been done regarding this matter demonstrate that young boys raised by gay men are not any more likely to be gay than kids raised by heterosexual individuals. As gay and lesbian parents illustrated their unique qualities as foster families and adopters, there was less needed to claim that they are as perfect as heterosexual parents, with the underlying expectation that the best family model is the heterosexual model (Mallon, 2007).

Gay and lesbian parents are working hard to build an atmosphere that accepts and supports their children and show their role as parents; therefore, children who grow up with gay and lesbian parents are accepted by their family and friends (McNair, Dempsey, Wise, & Perlesz, 2002). When their childhood environment was marked by openness and acceptance of lesbian and gay relationships, most children who grew up in gay and lesbian families were identified as heterosexual (Golombok & Tasker, 1996). To start with, young children with homosexual parents might help guarantee their financial congruity in material prosperity through such advantages as family leave from work and spousal medical coverage qualifications. Same-sex marriage may profit children by expanding the stability of their parent’s homosexual relationship and may bring expanded social acknowledgment and support for same-sex families (Meezan & Rauch, 2005). The number of adults and the gender of adults in a house has no huge impact on the sexual orientation of children but increases the happiness of the adult relationship in the family and the thoughtfulness of comfort and engagement between adults and children that can have a major impact on the child. The child’s frequency of contact with other adults and sense of well – being were significantly linked. Having a larger circle of people to communicate with either relatives or non-related people (Millbank, 2003). In conclusion, children who are raised by homosexuals do not have higher rates of their sexuality other than children who are being raised by heterosexuals.

LGBTQ Parents: the Stereotypes and Heteronormativity

LGBTQ Parents: their Hardships and Heteronormativity