The Working Conditions in the Factories of England 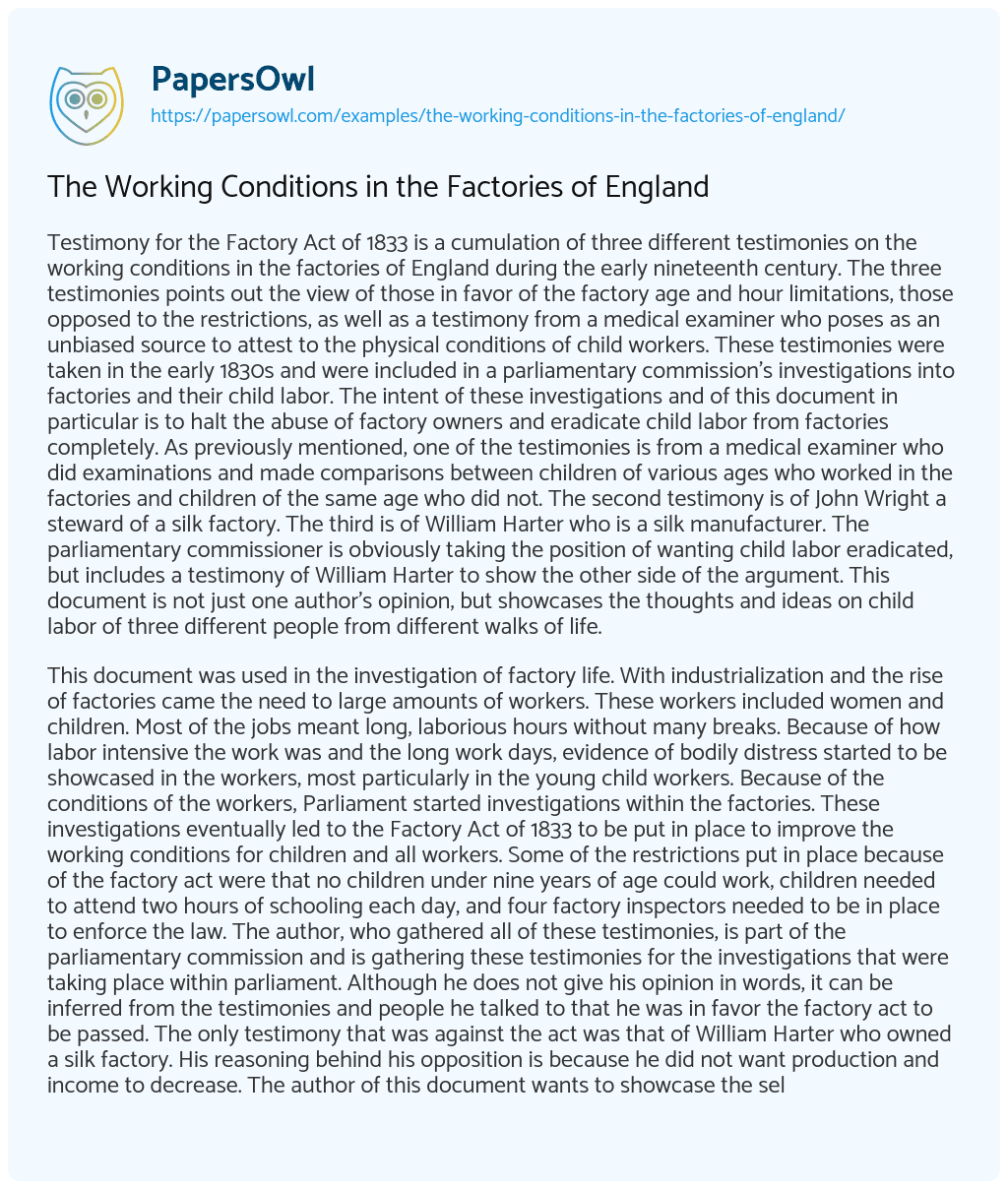 Testimony for the Factory Act of 1833 is a cumulation of three different testimonies on the working conditions in the factories of England during the early nineteenth century. The three testimonies points out the view of those in favor of the factory age and hour limitations, those opposed to the restrictions, as well as a testimony from a medical examiner who poses as an unbiased source to attest to the physical conditions of child workers. These testimonies were taken in the early 1830s and were included in a parliamentary commission’s investigations into factories and their child labor. The intent of these investigations and of this document in particular is to halt the abuse of factory owners and eradicate child labor from factories completely. As previously mentioned, one of the testimonies is from a medical examiner who did examinations and made comparisons between children of various ages who worked in the factories and children of the same age who did not. The second testimony is of John Wright a steward of a silk factory. The third is of William Harter who is a silk manufacturer. The parliamentary commissioner is obviously taking the position of wanting child labor eradicated, but includes a testimony of William Harter to show the other side of the argument. This document is not just one author’s opinion, but showcases the thoughts and ideas on child labor of three different people from different walks of life.

This document was used in the investigation of factory life. With industrialization and the rise of factories came the need to large amounts of workers. These workers included women and children. Most of the jobs meant long, laborious hours without many breaks. Because of how labor intensive the work was and the long work days, evidence of bodily distress started to be showcased in the workers, most particularly in the young child workers. Because of the conditions of the workers, Parliament started investigations within the factories. These investigations eventually led to the Factory Act of 1833 to be put in place to improve the working conditions for children and all workers. Some of the restrictions put in place because of the factory act were that no children under nine years of age could work, children needed to attend two hours of schooling each day, and four factory inspectors needed to be in place to enforce the law. The author, who gathered all of these testimonies, is part of the parliamentary commission and is gathering these testimonies for the investigations that were taking place within parliament. Although he does not give his opinion in words, it can be inferred from the testimonies and people he talked to that he was in favor the factory act to be passed. The only testimony that was against the act was that of William Harter who owned a silk factory. His reasoning behind his opposition is because he did not want production and income to decrease. The author of this document wants to showcase the selfishness and general dismissiveness of factory owners for their workers. William Harter does not care about the state of his workers as long as his factory continues to make money.

This document is valuable as a historical document because it is not just one person’s opinion, it is taken from the point of view of people who saw first hand the affects of factory life and how children were affected, but it also gives an account of someone who was in charge of these workers and what he deemed most important when running a factory. The testimonies tell us that there was a lot of conflict in this time period and people were not happy with the way child labor was handled. As with all sources, there are limitations to the accounts in this document. The main limitation is that there are only three testimonies. While they do cover a wide range of occupations and demographics, three people cannot represent the people’s opinion as a whole. Of course there were more investigations that gave account to a wider range of people, in the context of this document alone, the amount of testimonies given is seen as a limitation. This document; however, is incredibly important to the basic understanding of the effects of labor on children within factories and showcases many of the reasons that led up to the implementation of the Factory Act of 1833.

The Working Conditions in the Factories of England. (2021, Apr 10). Retrieved from https://papersowl.com/examples/the-working-conditions-in-the-factories-of-england/

How did the Establishment of Laws Improve the Living Conditions