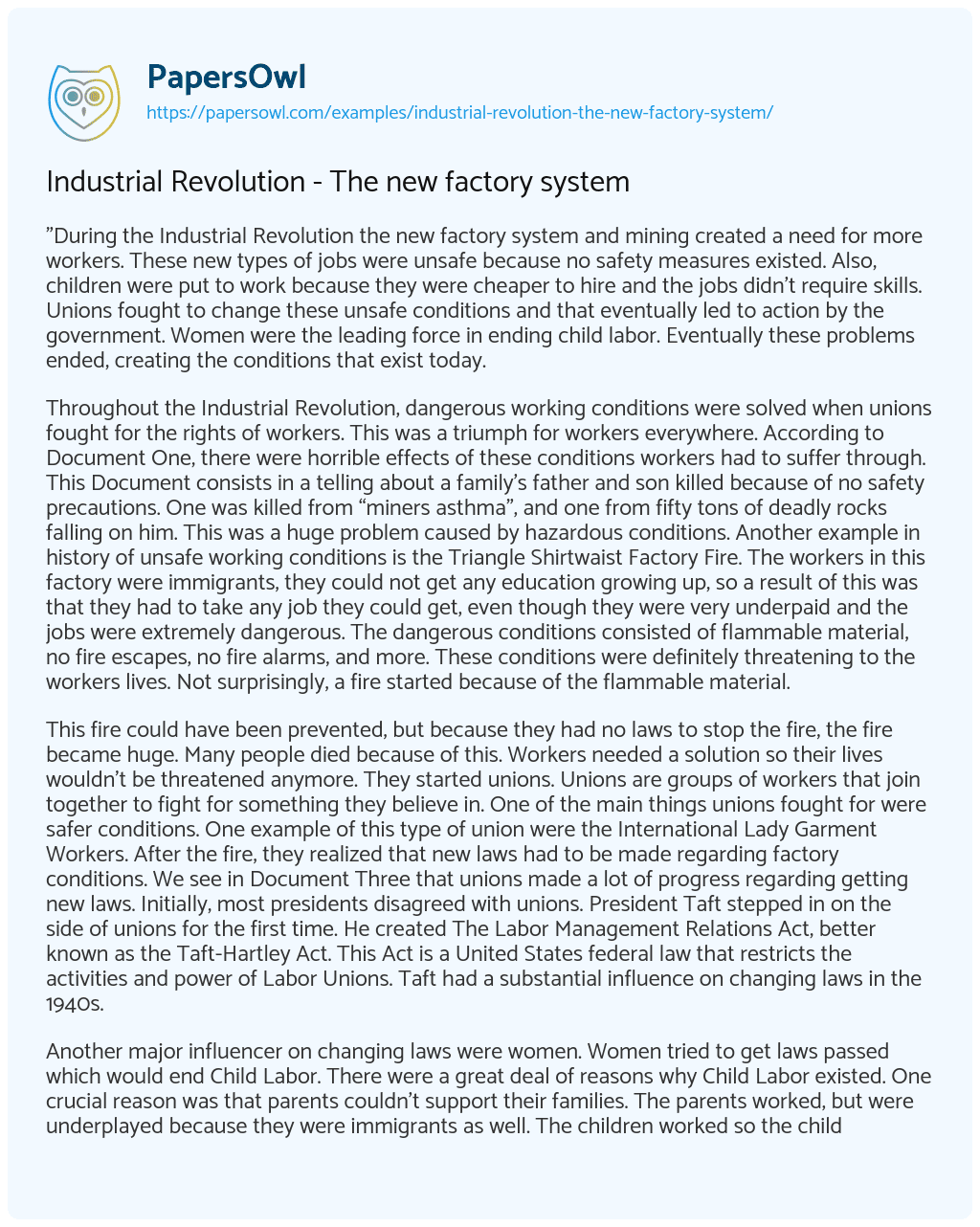 “During the Industrial Revolution the new factory system and mining created a need for more workers. These new types of jobs were unsafe because no safety measures existed. Also, children were put to work because they were cheaper to hire and the jobs didn’t require skills. Unions fought to change these unsafe conditions and that eventually led to action by the government. Women were the leading force in ending child labor. Eventually these problems ended, creating the conditions that exist today.

Throughout the Industrial Revolution, dangerous working conditions were solved when unions fought for the rights of workers. This was a triumph for workers everywhere. According to Document One, there were horrible effects of these conditions workers had to suffer through. This Document consists in a telling about a family’s father and son killed because of no safety precautions. One was killed from “miners asthma”, and one from fifty tons of deadly rocks falling on him. This was a huge problem caused by hazardous conditions. Another example in history of unsafe working conditions is the Triangle Shirtwaist Factory Fire. The workers in this factory were immigrants, they could not get any education growing up, so a result of this was that they had to take any job they could get, even though they were very underpaid and the jobs were extremely dangerous. The dangerous conditions consisted of flammable material, no fire escapes, no fire alarms, and more. These conditions were definitely threatening to the workers lives. Not surprisingly, a fire started because of the flammable material.

This fire could have been prevented, but because they had no laws to stop the fire, the fire became huge. Many people died because of this. Workers needed a solution so their lives wouldn’t be threatened anymore. They started unions. Unions are groups of workers that join together to fight for something they believe in. One of the main things unions fought for were safer conditions. One example of this type of union were the International Lady Garment Workers. After the fire, they realized that new laws had to be made regarding factory conditions. We see in Document Three that unions made a lot of progress regarding getting new laws. Initially, most presidents disagreed with unions. President Taft stepped in on the side of unions for the first time. He created The Labor Management Relations Act, better known as the Taft-Hartley Act. This Act is a United States federal law that restricts the activities and power of Labor Unions. Taft had a substantial influence on changing laws in the 1940s.

Another major influencer on changing laws were women. Women tried to get laws passed which would end Child Labor. There were a great deal of reasons why Child Labor existed. One crucial reason was that parents couldn’t support their families. The parents worked, but were underplayed because they were immigrants as well. The children worked so the children and their parents would hopefully make enough to sustain their family. Another reason why Child Labor existed was that the factory owners didn’t have to pay the children a lot of money. These factory jobs didn’t require skills. An additional reason why Child Labor existed was that children generally have more endurance. Adults normally get tired a lot faster than children, which is why children could work way faster than adults in factories. A last reason why Child Labor existed was that children weren’t getting an education. This was bad because then it would cause a cycle of child labor. Women then decided it was necessary to help children get out of factories and go to school. Three women were imperative in this process. The first is Florence Kelley. She wrote a report on how children were work. Her work was against sweatshops, and she argued for minimum wage, eight-hour work days, and children’s rights. This report is widely regarded today. Another imperative woman is Jane Addams. Her and other women opened settlement houses such as Hull House. Hull House have free childcare, and many other essential things for children to grow up with so they can strive in the future. Because of the childcare, the children grew up and could actually get a successful job so they wouldn’t grow up too work in unsafe factories. The final woman who was crucial to the new laws made today is Woodrow Wilson. She got a law that would make it illegal for children to work in factories. We see in Document Seven that the State of Georgia welcomes the operation of the new Labor Law. This shows that Florence Kelley, Jane Addams, Woodrow Wilson, and many other women really made a big impact on new laws today.

In conclusion, major progress was made with these two major problems. Child labor and unsafe working conditions were substantial then, which caused death and distress. The state of working environments during the Industrial Revolution was a cause for The Labor Movement. The Labor Movement was necessary to protect the common interest of workers. The world has had so many great achievements but what people frequently don’t think about is the inadequate conditions before these great accomplishments.”