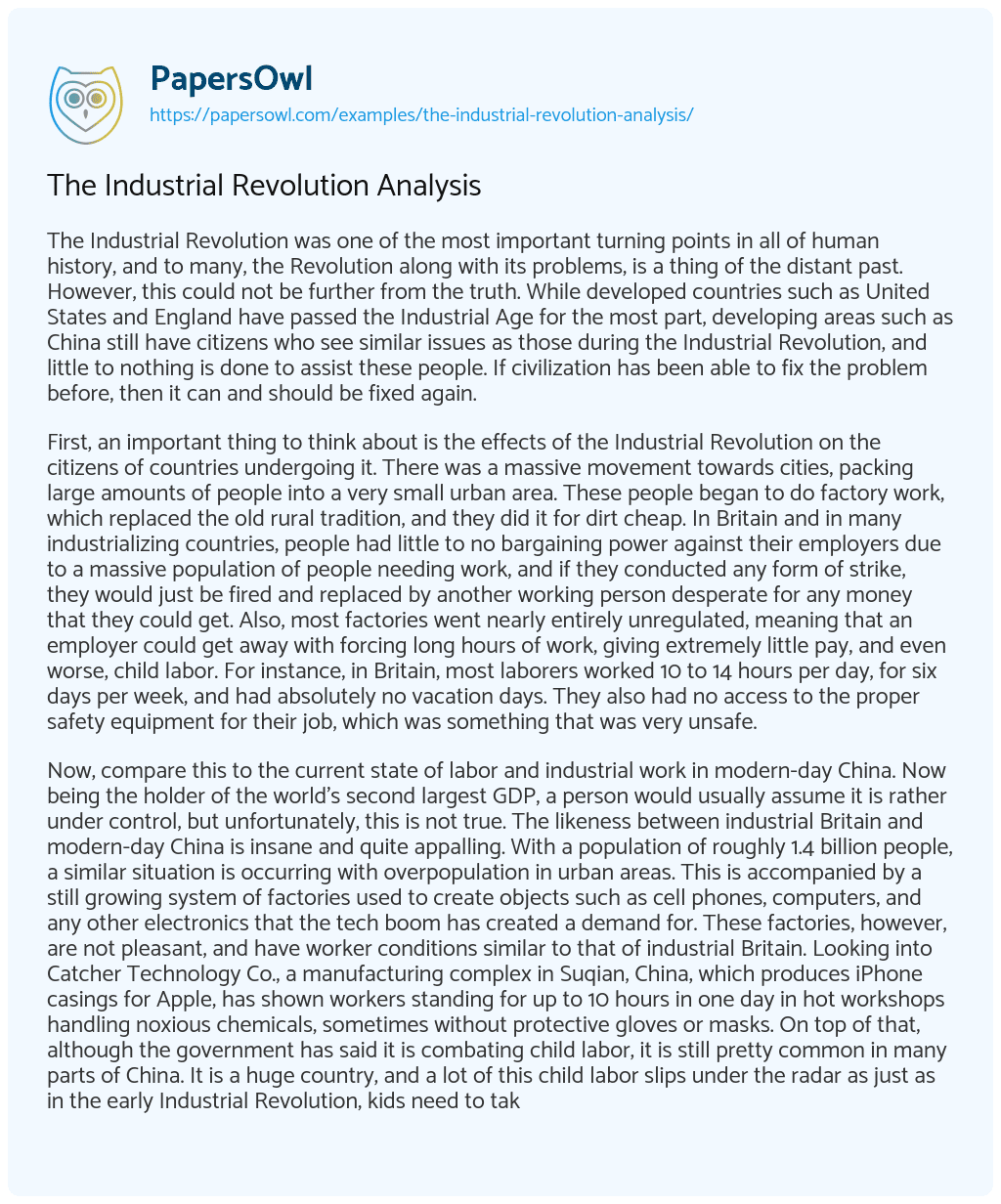 The Industrial Revolution was one of the most important turning points in all of human history, and to many, the Revolution along with its problems, is a thing of the distant past. However, this could not be further from the truth. While developed countries such as United States and England have passed the Industrial Age for the most part, developing areas such as China still have citizens who see similar issues as those during the Industrial Revolution, and little to nothing is done to assist these people. If civilization has been able to fix the problem before, then it can and should be fixed again.

First, an important thing to think about is the effects of the Industrial Revolution on the citizens of countries undergoing it. There was a massive movement towards cities, packing large amounts of people into a very small urban area. These people began to do factory work, which replaced the old rural tradition, and they did it for dirt cheap. In Britain and in many industrializing countries, people had little to no bargaining power against their employers due to a massive population of people needing work, and if they conducted any form of strike, they would just be fired and replaced by another working person desperate for any money that they could get. Also, most factories went nearly entirely unregulated, meaning that an employer could get away with forcing long hours of work, giving extremely little pay, and even worse, child labor. For instance, in Britain, most laborers worked 10 to 14 hours per day, for six days per week, and had absolutely no vacation days. They also had no access to the proper safety equipment for their job, which was something that was very unsafe.

Now, compare this to the current state of labor and industrial work in modern-day China. Now being the holder of the world’s second largest GDP, a person would usually assume it is rather under control, but unfortunately, this is not true. The likeness between industrial Britain and modern-day China is insane and quite appalling. With a population of roughly 1.4 billion people, a similar situation is occurring with overpopulation in urban areas. This is accompanied by a still growing system of factories used to create objects such as cell phones, computers, and any other electronics that the tech boom has created a demand for. These factories, however, are not pleasant, and have worker conditions similar to that of industrial Britain. Looking into Catcher Technology Co., a manufacturing complex in Suqian, China, which produces iPhone casings for Apple, has shown workers standing for up to 10 hours in one day in hot workshops handling noxious chemicals, sometimes without protective gloves or masks. On top of that, although the government has said it is combating child labor, it is still pretty common in many parts of China. It is a huge country, and a lot of this child labor slips under the radar as just as in the early Industrial Revolution, kids need to take the work to survive and help their families economically. Besides from the terrible conditions and child labor, laborers also have no abilities to form a union. When hundreds of workers and students tried to form a labor union legally under the set laws of the Chinese government, the government and their employers cracked down on them with firings, detentions, surveillance, and the threat of jail. This is comparable to the misuse of the Sherman Anti-Trust Act (An act created to regulate competition between businesses) in the industrial United States in the 1890s against labor unions by both the government and employers.

Therefore, there can be little to no denial in the fact that the social effects of development during the time of Industrial America and Britain shows a very strong correlation to the current social effects of development in China. In addition to that, with the situation growing worse with a growing demand for cheap and efficient labor, the whole issue seems very hard to stop. However, upon looking at the past, perhaps there is some hope for China and its people. Although the industrial revolution had caused a terrible situation, very similar to that of which China’s workforce has now, it also lead to the rise of unions, business regulation, and worker rights. Even though the Chinese attempts now at unions seem small, they were similar to the early attempts in America, which eventually proved successful. The path to change may be hard, but as seen in American history, even in the worst situations, it is possible. Similarly, in these troubling times, the Chinese people do not show a sign of giving up on their hopes of proper worker rights. As long as the Chinese people continue their method of protest and attempting for the creation of unions, then eventually, just as history in America shows, change can and will occur.

Besides just the people’s determination, however, the government’s support is needed. China is run as a one-party state, with some serious federal control over nearly every part of life, making resistance or change difficult. This is where already developed countries can come into play. After all, it is partially due to these countries, which have long used China as a place to abuse for its cheap labor force, that the Chinese population is forced to work in these conditions at all. Just as seen in all industrializing countries during the Industrial Revolution, the only reason so many people were forced into factories was due to the new demand for cheap labor and cheap products. The developed countries are the ones that produce the demand for these goods and this labor, so if a good portion of them were to agree to create either trade restrictions or even the threat of it, if the government of China does not supply the workers with proper rights and suitable conditions, then perhaps China would be forced into finally fixing the problem. Even though that comes with the chance of increased prices of electronics, but what matters more, the extra $100 that a phone may cost, or the hundreds of millions of lives that can be improved or even saved by creating fair labor practices?

China is now experiencing the social issues that come with industrialization that nations have seen in the Industrial Revolution. The people are struggling for worker rights and fair labor laws, as they are working in despicable conditions comparable to the sweatshops and steel factories of Industrial America. People are exposed to dangerous chemicals, dangerous machinery, and dangerous working hours that is almost a replay of that from the Revolution. However, as the history of America and Britain shows, positive change for the workers did not come freely and did not come out of obedience to the oppressors. It was through constant determination and protest that the people gained their rights. With the combined efforts of modern developed countries and persistent Chinese workers, China can change, just like both the United States and Britain did. As Martin Luther King Jr. said, “Freedom is never voluntarily given by the oppressor; it must be demanded by the oppressed.”

The Industrial Revolution Analysis. (2021, May 17). Retrieved from https://papersowl.com/examples/the-industrial-revolution-analysis/