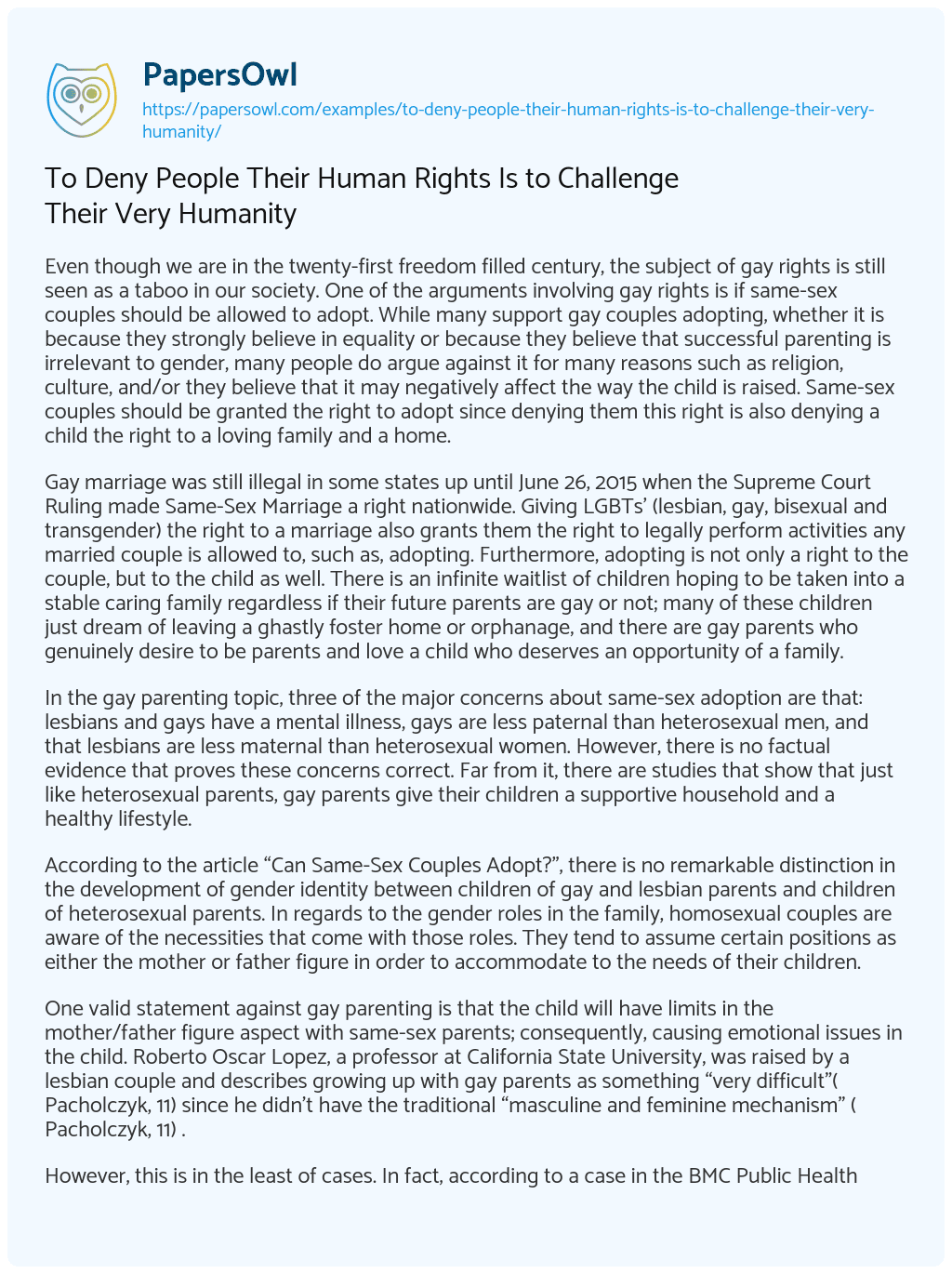 Even though we are in the twenty-first freedom filled century, the subject of gay rights is still seen as a taboo in our society. One of the arguments involving gay rights is if same-sex couples should be allowed to adopt. While many support gay couples adopting, whether it is because they strongly believe in equality or because they believe that successful parenting is irrelevant to gender, many people do argue against it for many reasons such as religion, culture, and/or they believe that it may negatively affect the way the child is raised. Same-sex couples should be granted the right to adopt since denying them this right is also denying a child the right to a loving family and a home.

Gay marriage was still illegal in some states up until June 26, 2015 when the Supreme Court Ruling made Same-Sex Marriage a right nationwide. Giving LGBTs’ (lesbian, gay, bisexual and transgender) the right to a marriage also grants them the right to legally perform activities any married couple is allowed to, such as, adopting. Furthermore, adopting is not only a right to the couple, but to the child as well. There is an infinite waitlist of children hoping to be taken into a stable caring family regardless if their future parents are gay or not; many of these children just dream of leaving a ghastly foster home or orphanage, and there are gay parents who genuinely desire to be parents and love a child who deserves an opportunity of a family.

In the gay parenting topic, three of the major concerns about same-sex adoption are that: lesbians and gays have a mental illness, gays are less paternal than heterosexual men, and that lesbians are less maternal than heterosexual women. However, there is no factual evidence that proves these concerns correct. Far from it, there are studies that show that just like heterosexual parents, gay parents give their children a supportive household and a healthy lifestyle.

According to the article “Can Same-Sex Couples Adopt?”, there is no remarkable distinction in the development of gender identity between children of gay and lesbian parents and children of heterosexual parents. In regards to the gender roles in the family, homosexual couples are aware of the necessities that come with those roles. They tend to assume certain positions as either the mother or father figure in order to accommodate to the needs of their children.

One valid statement against gay parenting is that the child will have limits in the mother/father figure aspect with same-sex parents; consequently, causing emotional issues in the child. Roberto Oscar Lopez, a professor at California State University, was raised by a lesbian couple and describes growing up with gay parents as something “very difficult”( Pacholczyk, 11) since he didn’t have the traditional “masculine and feminine mechanism” ( Pacholczyk, 11) .

However, this is in the least of cases. In fact, according to a case in the BMC Public Health, out of 500 children, 315 had same-sex parents and same-sex families showed 6% higher in general health and family unity. In emotional and physical performance, there was no difference with the children from the general population. People should not oversee gay adoption as having a negative influence in the emotional state of the child since in most cases, the child ends up in a joyful environment.

Gay adoption should have no limits and should not be prohibited in many adoption centers as it is at the moment. There is no basis to prove that gay parenting is inferior to heterosexual parenting since they both equally provide the child with opportunities to pursue their dreams. Thankfully, as gay adoption rates have increased over the years, society acceptance of same-sex parenting continues to rise as well.Because every couple, same-sex or not, seeking to adopt has the same dream of building a family.

To Deny People Their Human Rights Is to Challenge Their Very Humanity. (2021, Oct 15). Retrieved from https://papersowl.com/examples/to-deny-people-their-human-rights-is-to-challenge-their-very-humanity/

Same Sex Couple – Everyone has the Civil Right to Marry