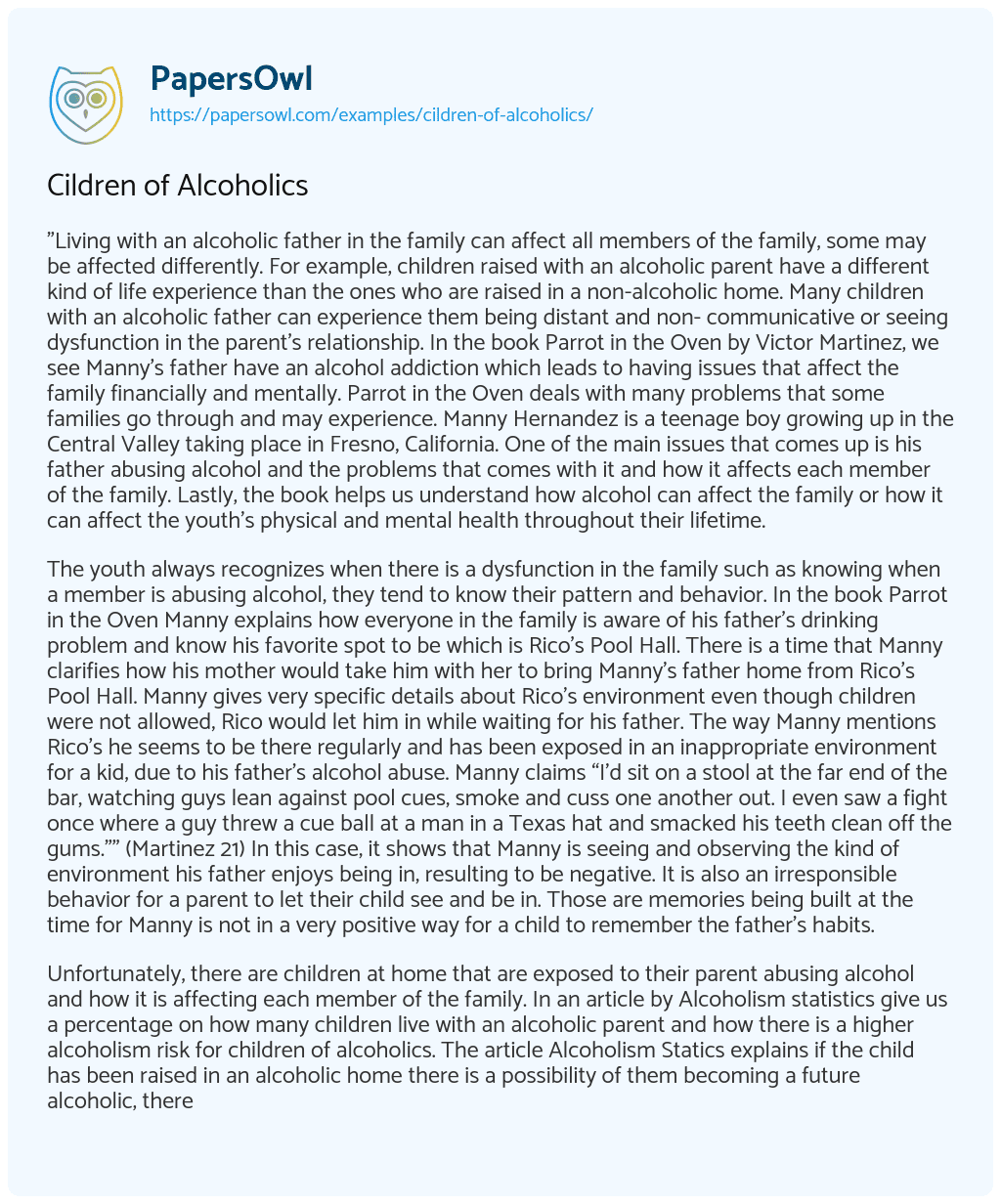 “Living with an alcoholic father in the family can affect all members of the family, some may be affected differently. For example, children raised with an alcoholic parent have a different kind of life experience than the ones who are raised in a non-alcoholic home. Many children with an alcoholic father can experience them being distant and non- communicative or seeing dysfunction in the parent’s relationship. In the book Parrot in the Oven by Victor Martinez, we see Manny’s father have an alcohol addiction which leads to having issues that affect the family financially and mentally. Parrot in the Oven deals with many problems that some families go through and may experience. Manny Hernandez is a teenage boy growing up in the Central Valley taking place in Fresno, California. One of the main issues that comes up is his father abusing alcohol and the problems that comes with it and how it affects each member of the family. Lastly, the book helps us understand how alcohol can affect the family or how it can affect the youth’s physical and mental health throughout their lifetime.

The youth always recognizes when there is a dysfunction in the family such as knowing when a member is abusing alcohol, they tend to know their pattern and behavior. In the book Parrot in the Oven Manny explains how everyone in the family is aware of his father’s drinking problem and know his favorite spot to be which is Rico’s Pool Hall. There is a time that Manny clarifies how his mother would take him with her to bring Manny’s father home from Rico’s Pool Hall. Manny gives very specific details about Rico’s environment even though children were not allowed, Rico would let him in while waiting for his father. The way Manny mentions Rico’s he seems to be there regularly and has been exposed in an inappropriate environment for a kid, due to his father’s alcohol abuse. Manny claims “I’d sit on a stool at the far end of the bar, watching guys lean against pool cues, smoke and cuss one another out. I even saw a fight once where a guy threw a cue ball at a man in a Texas hat and smacked his teeth clean off the gums.”” (Martinez 21) In this case, it shows that Manny is seeing and observing the kind of environment his father enjoys being in, resulting to be negative. It is also an irresponsible behavior for a parent to let their child see and be in. Those are memories being built at the time for Manny is not in a very positive way for a child to remember the father’s habits.

Unfortunately, there are children at home that are exposed to their parent abusing alcohol and how it is affecting each member of the family. In an article by Alcoholism statistics give us a percentage on how many children live with an alcoholic parent and how there is a higher alcoholism risk for children of alcoholics. The article Alcoholism Statics explains if the child has been raised in an alcoholic home there is a possibility of them becoming a future alcoholic, there is a belief that alcoholism is influenced by your surroundings and genetically or a collaboration of both. Alcoholism Statistics informs that an estimated 6.6 million children under the age of 18 live in households with at least one alcoholic parent. Alcoholism statistics also reports that about 43% of adults in the US (76 million people) have had a parent who is or was an alcoholic. Overall many children have experienced a family member with an alcohol addiction which can result in noticing the parent’s behavior whether they are functional or not. The parent’s behavior can end up being confusing to the children such as mood swings, inconstancy or being unpredictable can contribute towards an unbalanced home. Typically, families that have a member in the family with an alcohol addiction usually have other issues like the conflict in the home which includes arguing, fighting and sometimes physical abuse.

Clearly, there is a consequence of alcohol abuse for families. In an article from Daily Record by Linda Hall, she reports about the issue of how alcohol abuse has an impact on entire families. Hall also presents opinions explaining how alcohol abuse affects not only the abusers but also their family members, particularly children. Cameron Maneese, Executive director of Wayne County Family and Children First Council. She explains, “Drug abuse spans a range of problems, encompassing instability of housing, maintaining jobs, economic security, law enforcement and trauma to families and children. Chaos within the home related to drug or alcohol abuse undermining the family system and environment also causes problems for a child; trauma literally alters.” (qtd. In Hall). Maneese points out how alcohol abuse can contribute negative effects onto the family in many various ways making it difficult to live normal lives but importantly causes problems for the child. In Manny’s case, this can be relatable to what he is going through with his family. Also, the problems of Manny’s father’s alcohol abuse is causing the members of the family.

In the book, Manny’s parents have a dysfunctional relationship. Most of the abuse towards his wife would happen when Manny’s father would be under the influence of alcohol. There is a moment in the book where Manny’s father arrives home drunk and his wife is not there, even though she left a note behind. Manny’s father gets upset thinking that his wife left him, Manny explains, how she is not leaving but she is doing her hair at Sophia’s house. Manny claims, that his father said, “I’ll fix her”. Manny explains, “Dad pulled out his rifle from the shelf of his closet, and after checking the loader he began searching for bullets waking up Pedi.” (Martinez 56) resulting in him attempting to shoot his wife while under the influence of alcohol. While this is happening, Manny was present and begs his father not to commit such a crime. Manny goes on and explains the consequences, but the father would not cooperate and explains how he doesn’t care what happens. Pedi was woken up by Manny’s father and notices the gun and gets excited, Manny explains “here you go, daddy, here Pedi gushed, handling him .22 bullets.”” Apparently, two children are witnessing their father’s violent behavior leading this to be a very unhealthy and unsafe environment for the children to grow up in. As a result of Manny’s fathers’ behavior while being under the influence of alcohol the law enforcement was notified of him trying to shoot his wife and is arrested. Therefore, Maneese’s description of the consequences of substance abuse does appear in Manny’s family one of them being law enforcement is involved. Which also leads to some trauma within the children.”

What is A.A. (Alcoholics Anonymous)?

Summary and Response “The Myth of Doomed Kids”