Motivation of Getting off of their Drug or Alcohol Abuse 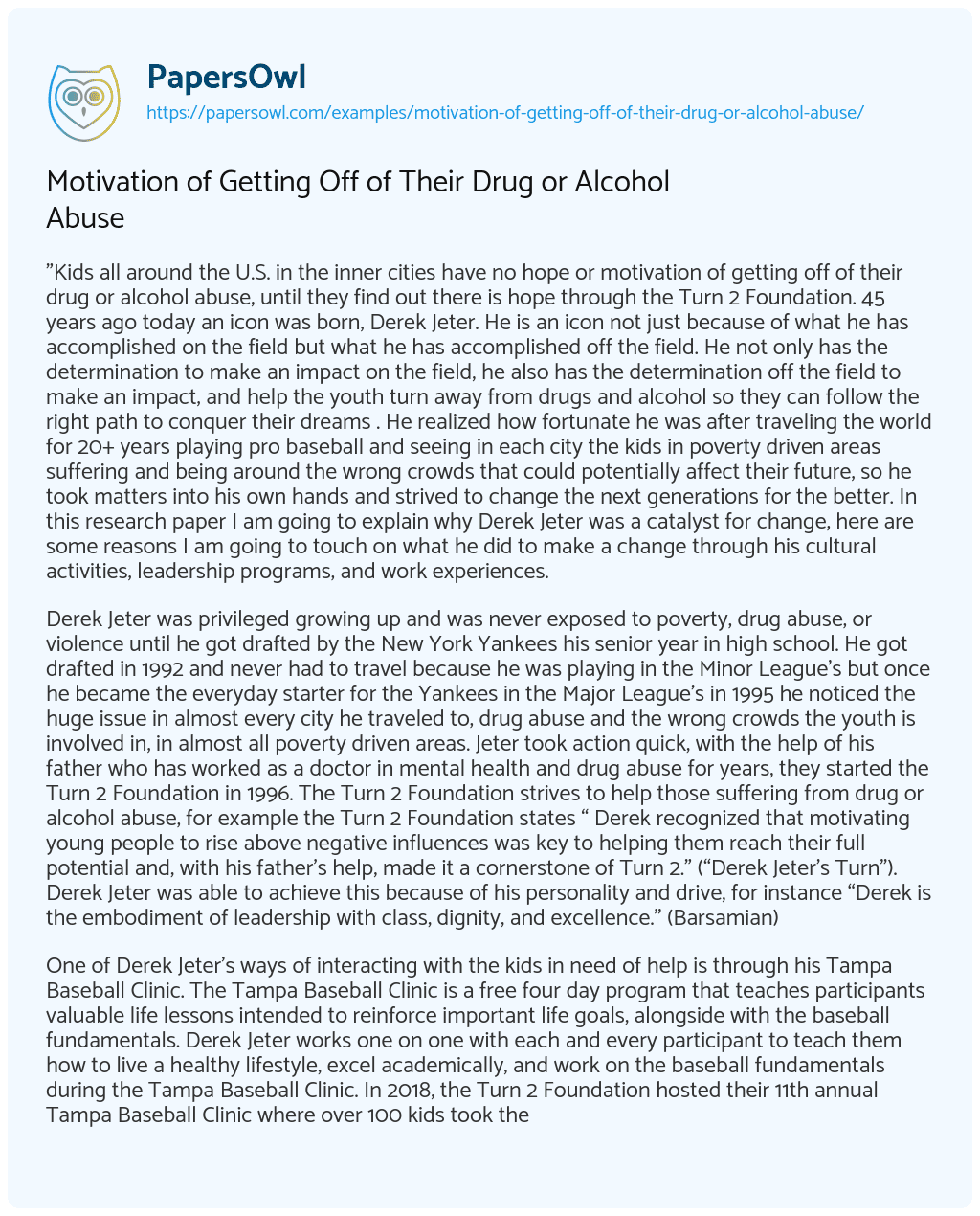 “Kids all around the U.S. in the inner cities have no hope or motivation of getting off of their drug or alcohol abuse, until they find out there is hope through the Turn 2 Foundation. 45 years ago today an icon was born, Derek Jeter. He is an icon not just because of what he has accomplished on the field but what he has accomplished off the field. He not only has the determination to make an impact on the field, he also has the determination off the field to make an impact, and help the youth turn away from drugs and alcohol so they can follow the right path to conquer their dreams . He realized how fortunate he was after traveling the world for 20+ years playing pro baseball and seeing in each city the kids in poverty driven areas suffering and being around the wrong crowds that could potentially affect their future, so he took matters into his own hands and strived to change the next generations for the better. In this research paper I am going to explain why Derek Jeter was a catalyst for change, here are some reasons I am going to touch on what he did to make a change through his cultural activities, leadership programs, and work experiences.

Derek Jeter was privileged growing up and was never exposed to poverty, drug abuse, or violence until he got drafted by the New York Yankees his senior year in high school. He got drafted in 1992 and never had to travel because he was playing in the Minor League’s but once he became the everyday starter for the Yankees in the Major League’s in 1995 he noticed the huge issue in almost every city he traveled to, drug abuse and the wrong crowds the youth is involved in, in almost all poverty driven areas. Jeter took action quick, with the help of his father who has worked as a doctor in mental health and drug abuse for years, they started the Turn 2 Foundation in 1996. The Turn 2 Foundation strives to help those suffering from drug or alcohol abuse, for example the Turn 2 Foundation states “ Derek recognized that motivating young people to rise above negative influences was key to helping them reach their full potential and, with his father’s help, made it a cornerstone of Turn 2.” (“Derek Jeter’s Turn”). Derek Jeter was able to achieve this because of his personality and drive, for instance “Derek is the embodiment of leadership with class, dignity, and excellence.” (Barsamian)

One of Derek Jeter’s ways of interacting with the kids in need of help is through his Tampa Baseball Clinic. The Tampa Baseball Clinic is a free four day program that teaches participants valuable life lessons intended to reinforce important life goals, alongside with the baseball fundamentals. Derek Jeter works one on one with each and every participant to teach them how to live a healthy lifestyle, excel academically, and work on the baseball fundamentals during the Tampa Baseball Clinic. In 2018, the Turn 2 Foundation hosted their 11th annual Tampa Baseball Clinic where over 100 kids took the field at the Port Tampa Bay Community Center and were impacted to make a change for the better. Sharlee Jeter, president of the Turn 2 Foundation states “”At its core, Turn 2 is focused on helping young people to lead healthy lifestyles, excel academically, rise above negative influences and ultimately reach their full potential, and the Baseball Clinic aims to achieve just that by teaching young people important life lessons that apply both on and off the field.”” (“Derek Jeter’s Turn”).

Derek Jeter has found other ways of impacting the youth through his Turn 2 Foundation and this is through the Celebrity Invitational. The Celebrity Invitational is a highly anticipated three day event where the top stars in all sports are invited to go out to Shadow Creek golf course to play in a “friendly” tournament. Last year the Celebrity Invitational showed up for its fourth annual three day golf tournament at Shadow Creek golf course, by the end of the event over $1 million was donated to support the Turn 2 Foundation clinics, and overall it’s missions. Derek Jeter is very proud and thankful for the Turn 2 Foundations supporters because without them he and his foundation wouldn’t be able to make such an impact. Derek Jeter on the Turn 2 Foundation states, “”The funds contributed to Turn 2 this year are invaluable, and will allow us to provide so many young people with the tools they need to excel in school, serve as leaders in their communities, and accomplish their dreams. The tremendous support we receive each year is a major factor in the continued success of this event, and that is something I am truly grateful for.”” (“Derek Jeter’s Turn”).

Through the Turn 2 Foundation, Derek Jeter has incentivized the youth to resist abusing drugs and alcohol. Derek Jeter has provided over 100 kids who stayed away from drugs and alcohol and graduate from high school in New York City, Kalamazoo, Michigan, and Tampa, Florida with a four year college scholarship for $25,000. He has impacted kids and given them the opportunity to earn a scholarship through these clinics Jackie Robinson Scholarship Foundation, Siena College Scholarship Foundation, Sharlee Jeter Scholarship Foundation, Kalamazoo Community Foundation Scholarship, and the Hillsborough Foundation Scholarship. Derek Jeter believes that all kids who stay on the right path through his foundation should be rewarded one way or another, most of the time he rewards the kids with scholarships. Derek and his sister Sharlee state “Each year we proudly watch our Jeter’s Leaders graduate high school and embark on a new, exciting chapter in their lives, and we are thrilled the UNCF/Sharlee Jeter Scholarship has allowed us to support deserving students in furthering their education.” (“Jeter, Derek).Derek goes on to speak about how he feels it’s only right to give back to the ones in need and are willing to work hard for what they want to make an impact.

Wesley Sien, is a student athlete at Amador Valley high school, who lives in Pleasanton California, and is also a great friend of mine, was inspired by Derek Jeter. Wesley first found out about Derek Jeter when he was 8 watching the Yankees play the Athletics. He was inspired by Derek Jeter because of the way he made the game look so easy and how humble he was as a person, along and his huge accomplishments. A few years after learning about Derek Jeter, Wesley was watching another Yankees v. Athletics game when he heard the announcers talk about Derek Jeter’s Turn 2 Foundation. He was intrigued and after researching he found out what the Turn 2 Foundation is all about. Wesley was intrigued because it positively reinforced the message of not doing drugs or alcohol which his parents had been drilling into forever. The fact that a famous celebrity like Jeter also condoned not using drugs further impressed that doing drugs was bad for me. Wesley believes that Jeter has stopped kids from abusing drugs because like him, many saw the famous face and at a young age were influenced to do what the celebrity did. I think that children are impressionable and that they follow what they see. They saw that Jeter was promoting drug abuse resistance, and since he was famous, they were inclined to follow his lead.

Derek Jeter overall, is a catalyst for change through his Turn 2 Foundation because of his huge impact in baseball, communities, and youth in New York, Kalamazoo Michigan, and Tampa Florida. Jeter’s accomplishments in baseball with a retired number and being in the hall of fame along with his accomplishments of helping over 100 children in the inner city has made him the icon he is today. He has influenced people to change and rise above negativity. He has impacted those who have attended his clinics and people who haven’t attended his clinics, his impact wouldn’t be possible if he didn’t have the determined work ethic or lovable personality that people look up to today. Though the amount of drug and alcohol abuse is still prevalent, he has helped to cut down the amount of children suffering from these problems. Jeter is looked up to by the youth and his peers because of his hard work and accomplishments on and off the field. Overall Derek Jeter is a catalyst for change through his impact on the youth, either on the field with the New York Yankees or off the field with his Turn 2 Foundation.”

Motivation of Getting Off of Their Drug or Alcohol Abuse. (2021, Apr 19). Retrieved from https://papersowl.com/examples/motivation-of-getting-off-of-their-drug-or-alcohol-abuse/

Drug and Alcohol Abuse in US

Reflection of Motivation of Early Dropout from Drug Abuse Treatment