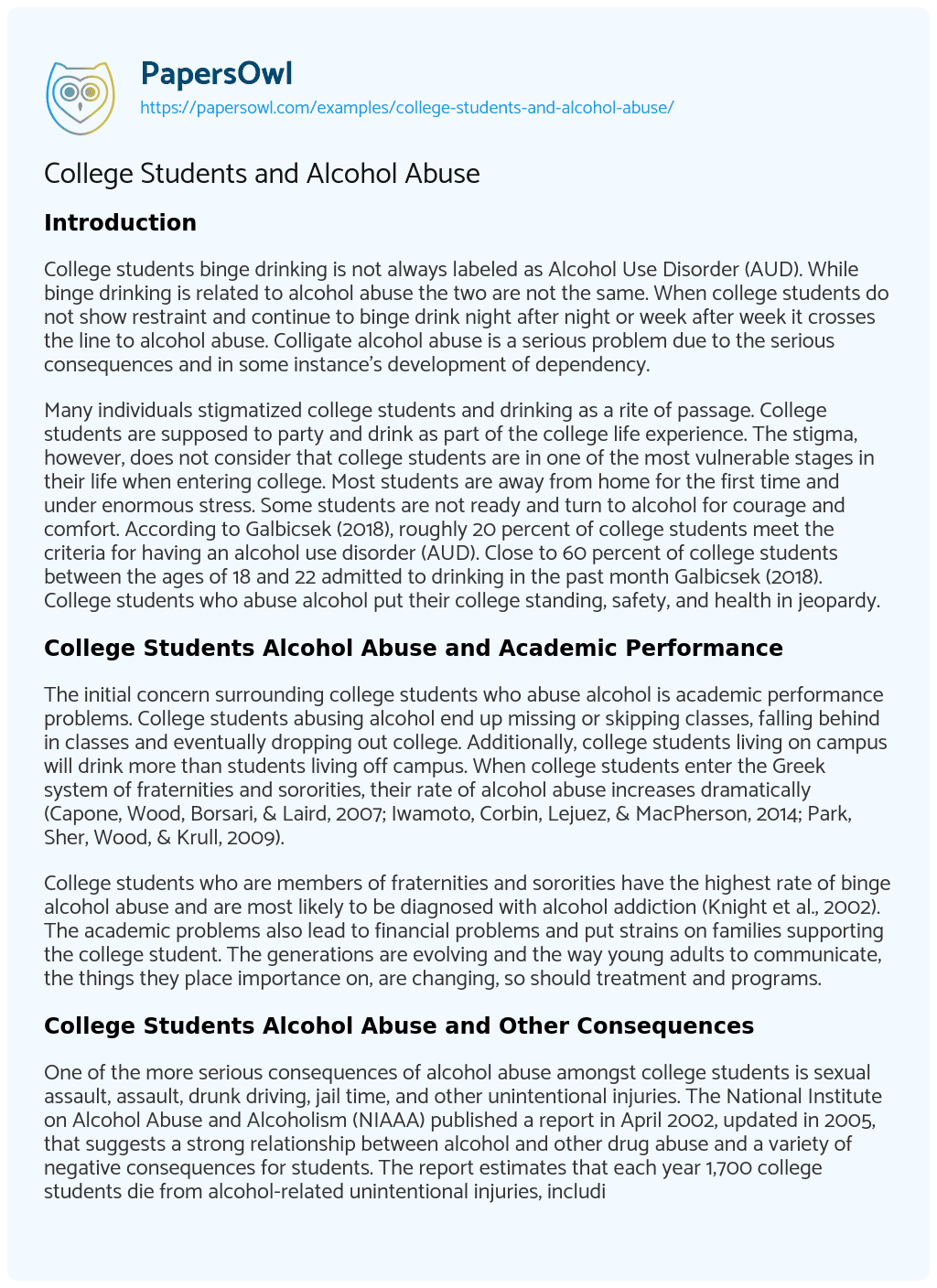 College students who are members of fraternities and sororities have the highest rate of binge alcohol abuse and are most likely to be diagnosed with alcohol addiction (Knight et al., 2002). The academic problems also lead to financial problems and put strains on families supporting the college student. The generations are evolving and the way young adults to communicate, the things they place importance on, are changing, so should treatment and programs.

Just as college students in the Greek system are more likely to binge drink and are more likely to be diagnosed with alcohol addiction, ethnicity, socioeconomics, religion, and gender also play a role in college alcohol abuse. Differences in use across race/ethnicity exist, with consistently fewer African American youth reporting alcohol use than Hispanics and Whites. For example, in 2009, 31% of African Americans in 12th grade reported alcohol use in the past month compared with 40% of Hispanic and 47% of White 12th graders (Johnston et al, 2010). Hispanic adolescents may experience lower levels of parental monitoring/ communication as a result of acculturation gaps, which may lead to higher rates of deviant peer affiliations and alcohol use (Coatsworth et al., 2002; Gil et al., 2000; Szapocznik et al., 2002).

The earliest school/college-based programs focused on providing the facts regarding the dangers of drug use and encouraging healthy alternatives and healthy expression of emotions (Botvin, 2000). Other programs have taught students the social skills thought necessary for drug avoidance (2016). In general, educational and abstinence-based approaches have shown the least usefulness. Additional examples of interventions include Education and awareness programs, Cognitive behavioral skills-based approaches, Motivation, and feedback-related approaches and Behavioral interventions offered by health professionals.

Some examples of intervention programs for college

Students thorough campus life include; Institutions of Higher education (IHE), Harm Reduction Programs, and Brief Alcohol Screening and Intervention for College Students (BASICS). These social and harm reduction programs are based on the premises that college students will use alcohol but concentrate on responsible drinking without developing dependency. The social learning models appear to be more successful on campus. The social media campaigns not to be confused with mass media campaigns are like the tobacco-free campaigns which again focuses on abstaining. On social media, there are hashtag campaigns such as #alcoholfree and #alcoholthinkagain which provide a safe environment for college students who choose to abstain and have an alcohol-free social culture.

Negative Effects of Alcohol on the College Students

The Effect of Alcohol on College Students