Essay about Kryptonite of College 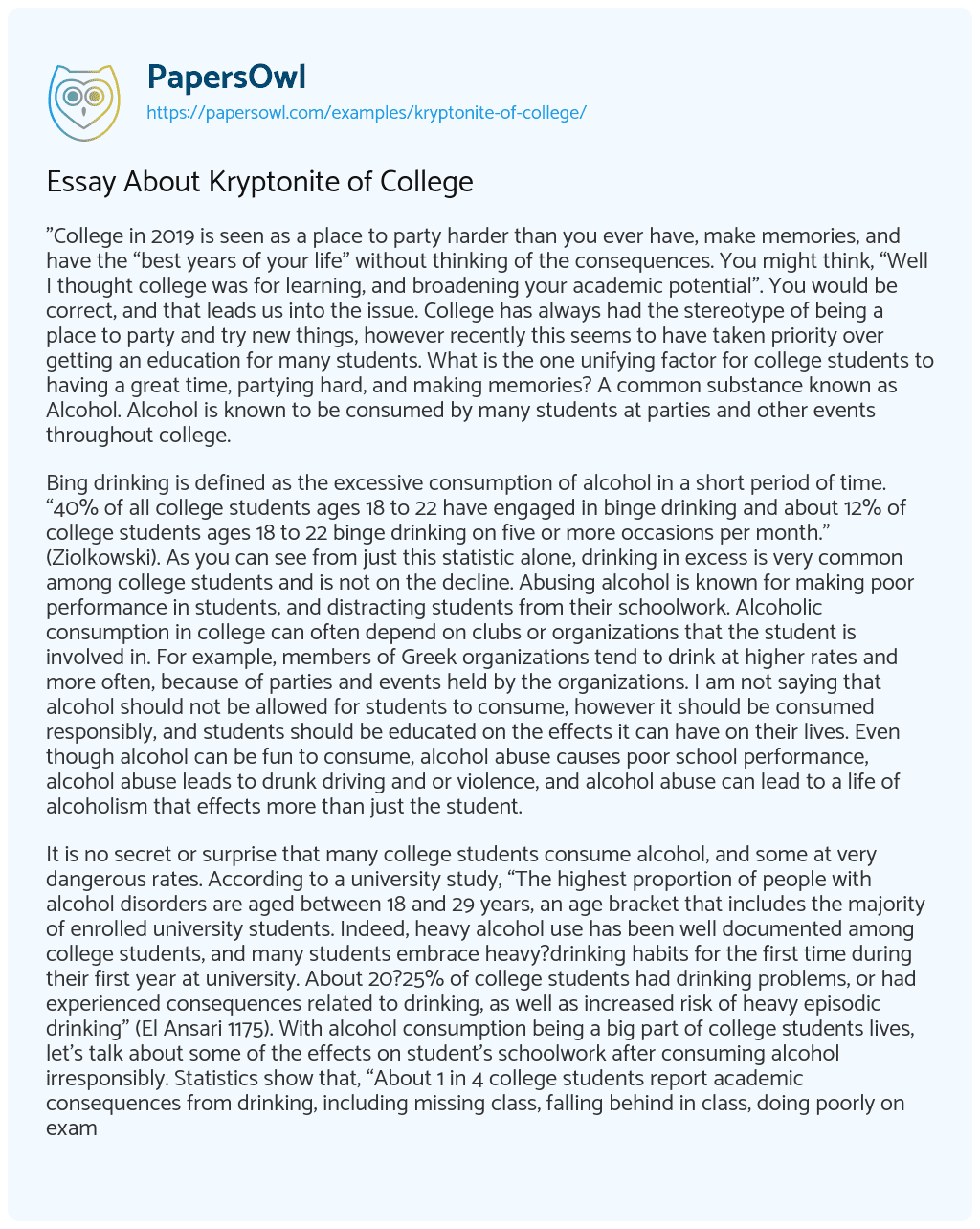 “College in 2019 is seen as a place to party harder than you ever have, make memories, and have the “best years of your life” without thinking of the consequences. You might think, “Well I thought college was for learning, and broadening your academic potential”. You would be correct, and that leads us into the issue. College has always had the stereotype of being a place to party and try new things, however recently this seems to have taken priority over getting an education for many students. What is the one unifying factor for college students to having a great time, partying hard, and making memories? A common substance known as Alcohol. Alcohol is known to be consumed by many students at parties and other events throughout college.

Bing drinking is defined as the excessive consumption of alcohol in a short period of time. “40% of all college students ages 18 to 22 have engaged in binge drinking and about 12% of college students ages 18 to 22 binge drinking on five or more occasions per month.” (Ziolkowski). As you can see from just this statistic alone, drinking in excess is very common among college students and is not on the decline. Abusing alcohol is known for making poor performance in students, and distracting students from their schoolwork. Alcoholic consumption in college can often depend on clubs or organizations that the student is involved in. For example, members of Greek organizations tend to drink at higher rates and more often, because of parties and events held by the organizations. I am not saying that alcohol should not be allowed for students to consume, however it should be consumed responsibly, and students should be educated on the effects it can have on their lives. Even though alcohol can be fun to consume, alcohol abuse causes poor school performance, alcohol abuse leads to drunk driving and or violence, and alcohol abuse can lead to a life of alcoholism that effects more than just the student.

It is no secret or surprise that many college students consume alcohol, and some at very dangerous rates. According to a university study, “The highest proportion of people with alcohol disorders are aged between 18 and 29 years, an age bracket that includes the majority of enrolled university students. Indeed, heavy alcohol use has been well documented among college students, and many students embrace heavy?drinking habits for the first time during their first year at university. About 20?25% of college students had drinking problems, or had experienced consequences related to drinking, as well as increased risk of heavy episodic drinking” (El Ansari 1175). With alcohol consumption being a big part of college students lives, let’s talk about some of the effects on student’s schoolwork after consuming alcohol irresponsibly. Statistics show that, “About 1 in 4 college students report academic consequences from drinking, including missing class, falling behind in class, doing poorly on exams or papers, and receiving lower grades overall” (Consequences of College Drinking).

In his article, Ziolkowski puts it this way, “A student decides to drink instead of turning his or her attention toward studying. A student experiences a hangover after drinking and oversleeps or decides not to attend class. Or a student’s hangover causes him or her not to address other responsibilities such as completing homework assignments of projects” (Alcohol Abuse in College Students: Warning Signs, and Prevention Tips). These are perfect examples of the situations that students put themselves in when drinking becomes a problem. Drinking is a distraction to schoolwork. It can cause hangovers and or oversleeping classes, and alcohol abuse makes students less responsible. Abusing alcohol can be seem fun and exciting as a student, but it is very hurtful to your grades and academic life.

One of the biggest reasons alcohol abuse with college students should be taken seriously is the trouble it can bring with the law. The two biggest issues for college students are Drinking and Driving and violence or sexual assault while intoxicated. A large amount of students admit to drinking and driving. Research shows that every year, “3,360,000 students between the ages of 18 and 24 drive under the influence of alcohol” (Drinking and Driving in College). Drinking and driving is an act of stupidity and can come with many consequences. Sometimes these consequences are fatal. Statistics show that each year of those 3,360,000 students, “1,825 college students between the ages of 18 and 24 die from alcohol-related unintentional injuries, including motor-vehicle crashes” (Consequences of College Drinking). Drinking under the influence should be taken very seriously, and prevented at all times. The other major issue that college students who overuse alcohol run into is violence and sexual assault. Alcohol can be known to make people act more violent than usual.

“Out of students who reported experiencing actual physical violence in and around their college campus throughout the seven years, an average of 57% said that alcohol was involved in the incident” (Ziolkowski). Over half of the reported violent incidents involved alcohol. This is not just an issue on college campuses, alcohol is the root cause of the majority of violence in the world as a whole. Sexual assault is a serious issue that is very common within universities. “Sexual assault is a pervasive problem on college campuses, and alcohol plays a central role in it. A study of roughly 5,500 college females on two campuses revealed that nearly 20 percent experienced some form of sexual assault while at college” (White). Alcohol abuse causes you to act in unlawful ways that you normally would not while sober or less intoxicated.

Alcohol abuse in college raises a student’s chances of having a life-long problem with alcoholism. Alcoholism is an addiction to the consumption of alcoholic liquor or the mental illness and compulsive behavior resulting from alcohol dependency. “Roughly 20 percent of college students meet the criteria for an AUD” (Consequences of College Drinking). AUD stands for Alcohol Use Disorder. Early drinking can help lead to alcoholism later in life. According to a study done by the National Institute on Alcohol Abuse and Alcoholism, “The associations between early drinking and later problems held even after investigators controlled for other risk factors for dependence, adding to concerns that drinking at a young age might raise the risk of future alcohol problems rather than being an identifying feature of young people predisposed to risky behavior” (National Institute on Alcohol Abuse and Alcoholism). The sooner a person starts drinking, the easier it is to become an alcoholic later. College students that abuse alcohol regularly begin to drink as force of habit. Alcoholism is a problem that affects a person emotionally, personally, and even sometimes legally. The longer we let college students abuse alcohol, the harder it is going to be for these students to not become dependent on it. Alcoholism doesn’t only affect the person with the disorder, it effects their family and friends as well.

During college, students develop ideas and traits that will guide them into the rest of their lives. While some college students come out of college with a degree, a good head on their shoulders, and many memories. Some miss out on these positive outcomes, because of this “Kryptonite of College”, alcohol. Alcohol abuse among college students is an issue that is overlooked in todays’ society. Many of times alcohol is glorified and praised, along with the people that abuse it. Alcohol can be a fun thing to consume when consumed responsibly. It is not drinking alcohol that is a problem for students. It is drinking alcohol excessively. We can lessen the amount of college dropouts due to alcohol abuse. We can decrease the amount of violence and sexual assault on college campuses. We can stop alcoholism from affecting the lives of many.”

Essay About Kryptonite of College. (2020, Aug 20). Retrieved from https://papersowl.com/examples/kryptonite-of-college/