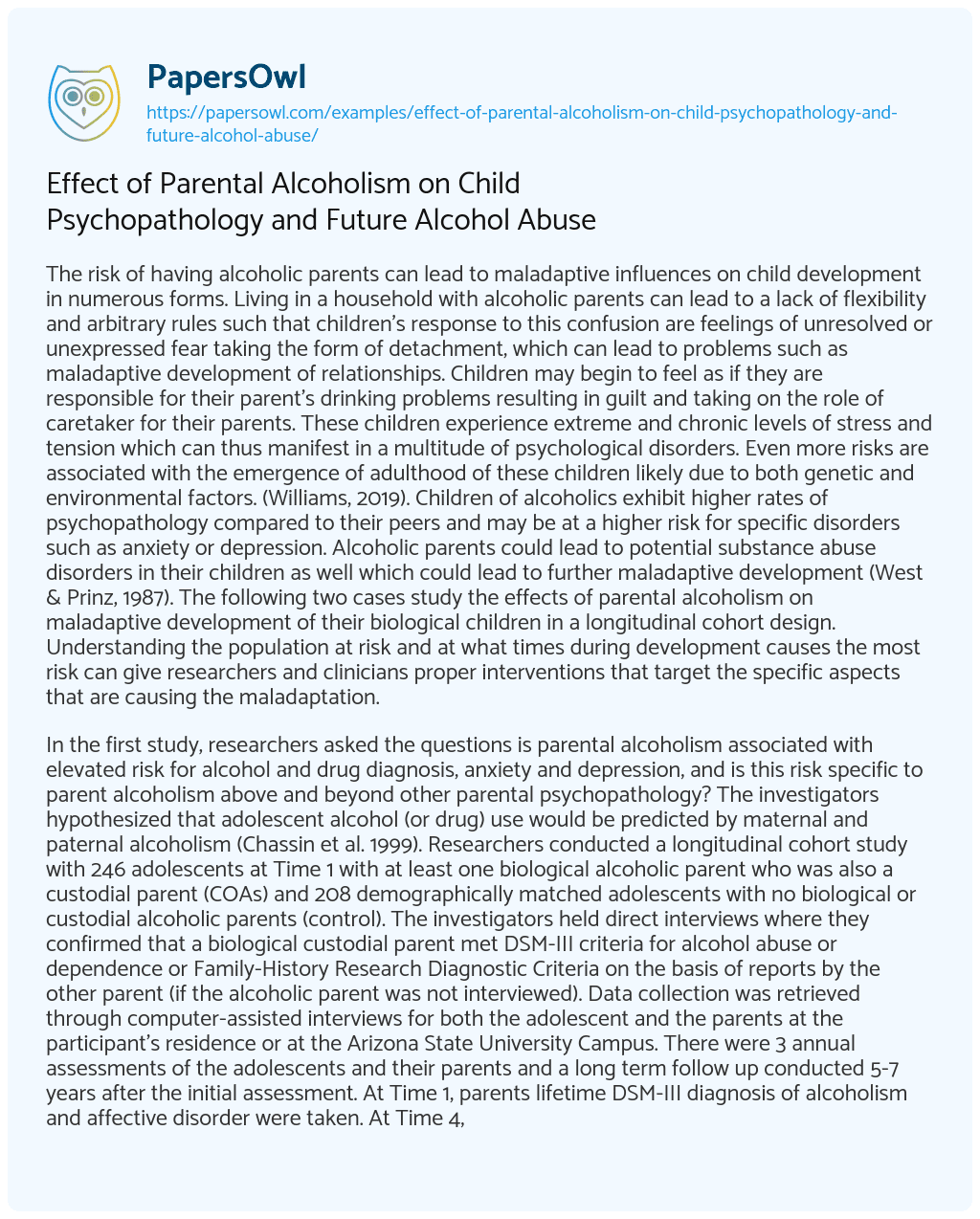 The risk of having alcoholic parents can lead to maladaptive influences on child development in numerous forms. Living in a household with alcoholic parents can lead to a lack of flexibility and arbitrary rules such that children’s response to this confusion are feelings of unresolved or unexpressed fear taking the form of detachment, which can lead to problems such as maladaptive development of relationships. Children may begin to feel as if they are responsible for their parent’s drinking problems resulting in guilt and taking on the role of caretaker for their parents. These children experience extreme and chronic levels of stress and tension which can thus manifest in a multitude of psychological disorders. Even more risks are associated with the emergence of adulthood of these children likely due to both genetic and environmental factors. (Williams, 2019). Children of alcoholics exhibit higher rates of psychopathology compared to their peers and may be at a higher risk for specific disorders such as anxiety or depression. Alcoholic parents could lead to potential substance abuse disorders in their children as well which could lead to further maladaptive development (West & Prinz, 1987). The following two cases study the effects of parental alcoholism on maladaptive development of their biological children in a longitudinal cohort design. Understanding the population at risk and at what times during development causes the most risk can give researchers and clinicians proper interventions that target the specific aspects that are causing the maladaptation.

In the first study, researchers asked the questions is parental alcoholism associated with elevated risk for alcohol and drug diagnosis, anxiety and depression, and is this risk specific to parent alcoholism above and beyond other parental psychopathology? The investigators hypothesized that adolescent alcohol (or drug) use would be predicted by maternal and paternal alcoholism (Chassin et al. 1999). Researchers conducted a longitudinal cohort study with 246 adolescents at Time 1 with at least one biological alcoholic parent who was also a custodial parent (COAs) and 208 demographically matched adolescents with no biological or custodial alcoholic parents (control). The investigators held direct interviews where they confirmed that a biological custodial parent met DSM-III criteria for alcohol abuse or dependence or Family-History Research Diagnostic Criteria on the basis of reports by the other parent (if the alcoholic parent was not interviewed). Data collection was retrieved through computer-assisted interviews for both the adolescent and the parents at the participant’s residence or at the Arizona State University Campus. There were 3 annual assessments of the adolescents and their parents and a long term follow up conducted 5-7 years after the initial assessment. At Time 1, parents lifetime DSM-III diagnosis of alcoholism and affective disorder were taken. At Time 4, they used the DSM-III-R to also test for anxiety disorder. Recency of parental alcoholism was measured at each wave through self-report using nine items from Sher’s (1987) questionnaire. Adolescent symptomology was taken by both the child and the parents using items from the Child Behavior Checklist (Achenbrock & Edelbrock 1981) at all waves. Alcohol and drug abuse were self-reported by the children through their frequency of consumption during the past year of alcohol and drugs. Adolescents were also asked to self-report their frequency of heavy drinking which is defined in this study as 5 drinks per occasion. At Time 4, the children now considered young adults, were interviewed with the DSM-III-R for a diagnosis of alcohol abuse and dependence, drug abuse dependence, affective disorder, and anxiety disorder.

As predicted, researchers found that COA’s were at significantly elevated risk for diagnoses of alcohol abuse or dependence and depressive disorder and were marginally elevated in their risk for anxiety disorder. Moreover, there were significant independent effects of paternal alcoholism, maternal alcoholism, parental antisocial personality, and gender. Young adults with alcoholic mothers, alcoholic fathers, parents who met criteria for antisocial personality disorder, and were males were more likely to develop alcohol abuse or dependence. For prediction of young adult depression and anxiety disorder there were significant main effects of maternal alcoholism and gender, such that individuals with maternal alcoholism and women were at higher risk for depression diagnoses. There was a marginal main effect of paternal depression, a significant effect of age, and an interaction between parent depression and age, such that parental depression was associated with greater risk for offspring depression among younger participants but not among older participants. The current study extended previous research by using a longitudinal study of families actively recruited from the community to test the magnitude and specificity of parent alcoholism effects on young adult development, and to test whether adolescent symptomology and substance use explained these effects. Results showed that parental alcoholism was a moderate risk factor for young adult alcohol and drug abuse/dependence.

Some limitations of this study were that a passive longitudinal family design does not distinguish genetic from environmental effects and cannot address questions of gene-environment interaction or covariation. Alternative designs like adoption studies and twin studies can help with gene-environment interaction and covariation variables. Another limitation is that the onset of diagnosis cannot be precisely dated, so that the effects of the adolescent mediators, such as friendships, genetics, and environment influences on the onset of disorders. By taking more accurate measures frequently one would have increased precision in dating the onset of the disorder which would assist in the development of interventions for adolescent psychopathology and alcohol and drug abuse. The internal validity of the study is good but, because it is not an experimental study, 3rd factors cannot be ruled out. For example, there may have been something to do with social factors, like friend influences that impacted the child’s alcohol and/or substance abuse and psychopathology along with their interactions with their parents and how their home life effects them in conjunction with their friendships and other relationships. The external validity of the study is not as good because it is evident in COA literature that samples that vary in the gender of the alcoholic parent, the density of alcoholism in the family pedigree, and so on may produce different outcomes.

Participants are from a 3rd generation multigenerational longitudinal study of families with AUD and matched controls at the Arizona State University. Generation 1 (G1) and Generation 2 (G2) were interviewed over 6 waves. At wave 5, Generation 3 (G3) were also interviewed. G3s were then interviewed 3 times after wave 6 (waves 7-9). The children in this study are G3 who reported about their drinking behaviors at least once between 18-25 and their parents, G2. The report of drinking was taken anytime between waves 7-9. The time between each wave was not reported. Biological custodial parents of G3s selected for the current study were coded as either no AUD, DLAUD, or persistent AUD. 178 participants had parents with no history of AUD, 59 had parents with DLAUD, and 124 had parents with persistent AUD. The measures taken about parental diagnosis of DSM-IV alcohol dependence and abuse were assessed with the Diagnostic Interview Schedule if both parents were interviewed or other parent report using Family History- Research Diagnostic Criteria if only one parent was interviewed over the course of wave 4, 5, and 6 of data collection. Results were coded as follows:

This study adds to the literature by suggesting that heterogeneity in parental AUD diagnosis that considers recovery in emerging adulthood may convey differential risk for children of parents with AUD. Results suggest that simply considering lifetime parental AUD as a dichotomous variable may be imprecise and results may be driven by persistent parental AUDs. A focus on positive parenting practices as a preventative measure for offspring substance use may only be beneficial for parents with persistent AUD, and thus prevention and intervention programs can be tailored to parents with persistent AUD vs. DLAUD.

One limitation of this study was that the investigators did not measure whether or not offspring currently lived with their parents, and this is important because living situation may impact their current alcohol consumption. An easy fix for this would be including a measure for it and any other major outside influences that could easily introduce error. Another limitation of this study is that other types of heterogeneity are important to consider, such as the number of parents with AUD and severity of AUD. By including more measures to get a more accurate view on the influence of parental AUD on child alcoholism one can find proper interventions to target these specific problems. Like the previous the study, this is also a longitudinal cohort study and not an experiment, presenting problems such as ruling out 3rd factors. As stated as one of the limitations, a potential 3rd factor could be that the children’s living situations may influence the outcome of their alcohol use. The external validity is also not good because this sample population comes from another sample recruited for another study and all are concentrated in one geographical area.