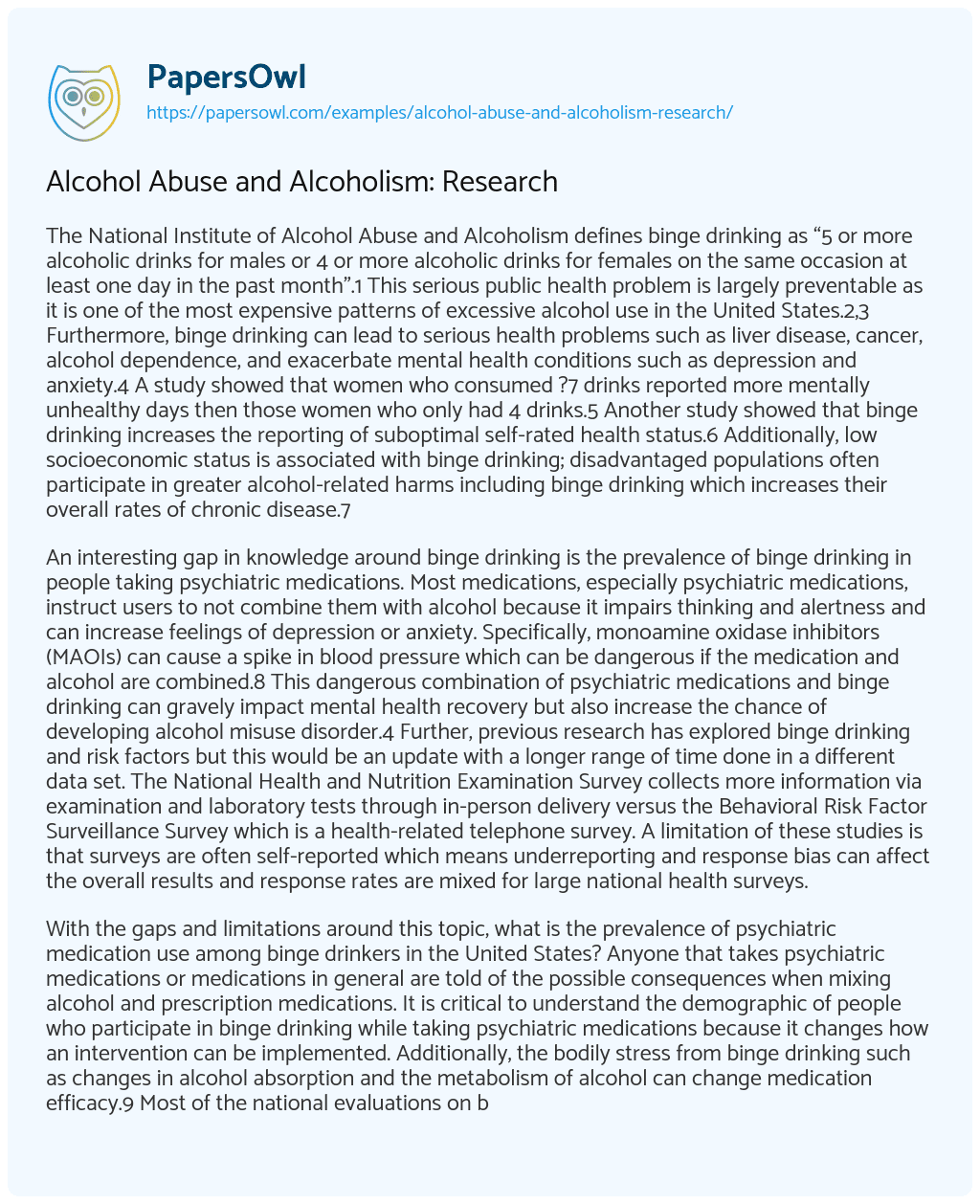 The National Institute of Alcohol Abuse and Alcoholism defines binge drinking as “5 or more alcoholic drinks for males or 4 or more alcoholic drinks for females on the same occasion at least one day in the past month”.1 This serious public health problem is largely preventable as it is one of the most expensive patterns of excessive alcohol use in the United States.2,3 Furthermore, binge drinking can lead to serious health problems such as liver disease, cancer, alcohol dependence, and exacerbate mental health conditions such as depression and anxiety.4 A study showed that women who consumed ?7 drinks reported more mentally unhealthy days then those women who only had 4 drinks.5 Another study showed that binge drinking increases the reporting of suboptimal self-rated health status.6 Additionally, low socioeconomic status is associated with binge drinking; disadvantaged populations often participate in greater alcohol-related harms including binge drinking which increases their overall rates of chronic disease.7

An interesting gap in knowledge around binge drinking is the prevalence of binge drinking in people taking psychiatric medications. Most medications, especially psychiatric medications, instruct users to not combine them with alcohol because it impairs thinking and alertness and can increase feelings of depression or anxiety. Specifically, monoamine oxidase inhibitors (MAOIs) can cause a spike in blood pressure which can be dangerous if the medication and alcohol are combined.8 This dangerous combination of psychiatric medications and binge drinking can gravely impact mental health recovery but also increase the chance of developing alcohol misuse disorder.4 Further, previous research has explored binge drinking and risk factors but this would be an update with a longer range of time done in a different data set. The National Health and Nutrition Examination Survey collects more information via examination and laboratory tests through in-person delivery versus the Behavioral Risk Factor Surveillance Survey which is a health-related telephone survey. A limitation of these studies is that surveys are often self-reported which means underreporting and response bias can affect the overall results and response rates are mixed for large national health surveys.

As discussed, binge drinking can increase rates of cancer, liver disease, and exacerbate psychiatric conditions.4 Among those in the United States that indicated they participate in binge drinking, the rates are critical to improving comprehensive health care. Behavioral health is just as important, especially in people with other chronic conditions. This would build upon previous information about self-reported health status among binge drinkers and also socioeconomic differences in this population.6,7 Especially as public health prevention and intervention becomes stronger in clinical medicine, promotion of health behaviors such as limited alcohol consumption can improve not just depression but can prevent cancer and liver disease which shortens lifespans.10

In conclusion, the proposed focus on psychiatric medication prevalence and alcohol-related chronic disease brings new light and concern to the current state of binge drinking in the United States; in which, this alternative perspective will encourage continued research and intervention in one of the most preventable public health problems facing the United States.

The National Health and Nutrition Examination Survey is a cross-sectional nationally representative survey out of the National Center for Health Statistics. Data is publicly released every 2 years. Participants were part of a multistage, stratified probability sampling across the US population. Survey participants receive in-person home interview, physical examinations and laboratory tests where blood and urine were obtained from participants. The surveys were approved by the National Center for Health Statistics Institutional Review Board and consent was obtained from all participants. Persons 20 years or older from the NHANES data in 2009-2014 were included in this analysis (n=9,542). Binge drinking is defined as “5 or more alcoholic drinks for males or 4 or more alcoholic drinks for females on the same occasion at least one day in the past month”. The question “Ever have 4/5 or more drinks every day?” was used to classify binge drinkers and non-binge drinkers which includes people that do not drink. Medications were classified into four categories based off guidelines from the National Institute of Mental Health into anti-depressants, anti-anxiety, antipsychotics, and other psychotropic agents. Descriptive statistics were completed to identify sociodemographic and other clinical factors. Relevant sample weights were applied to account for probabilities of selection and the multistage complex survey design. IBM SPSS Statistics Software 25 was used for data analysis and cleaning.

Table 2 depicts psychiatric medication use among the two groups and then split by specific medication categories from the National Institute of Mental Health. Compared to non-binge drinkers, binge drinkers have a higher percent of psychiatric medication use at 15.5% (n=253) compared to 11.0% (868) of non-binge drinkers at p<.001 significance. by breakdown of medication type there is a significant difference between binge drinkers and non-binge for anti-depressants anti-anxiety anti-psychotics table shows the logistic regression drinking among key demographic characteristic another variable. variables being male gender was significantly associated with an increased risk drinking. furthermore those that did not see recent mental health professional were more likely to drink>

Despite recommendations from providers and the directions on prescription medication labels, people continue to drink while on psychiatric medications. The higher rates of anti-depressant and anti-anxiety use among binge drinkers can increase feelings of depression, anxiety, and increase thoughts of suicide.9 Although there are no definitive predictors of binge drinking in adults, anxiety and depression can be associated with unsafe patterns of alcohol consumption.11

As this study has shown, men are more likely to participate in binge drinking compared to women. Several recent studies support this claim but more importantly, why does binge drinking affect men more than women?12–14 One possible case can be made for alexithymia, which is difficulty identifying/describing feelings and externally oriented thinking which is characterized by reduced introspection; a recent study showed that men that reported higher levels of externally oriented thinking were more likely to consume a higher number of drinks.14 Another case can be made that men are more likely to take other risks such as driving fast or driving without a seatbelt while consuming alcohol.15 Additionally, extraversion in males can make them more susceptible to “social matching” of alcohol consumption.16 All of these are factors that influence the higher rate of binge drinking among men in the United States.

There are definite limitations to this study including respondent bias and misclassification bias. NHANES is cross-sectional in nature which means causality cannot be determined by the data reported. Additionally, responses are self-reported which can both underestimate the average number of drinks consumed by the respondent. Furthermore, the classification of binge drinking was from the National Institute on Alcohol Abuse and Alcoholism which could be measured in other ways such as blood alcohol concentration or general number of drinks rather than separated by gender.11 This type of measurement misclassification in identifying the binge drinking group could be an overestimate of male binge drinking. Future research should focus on several key areas including measurement and definition of binge drinking but also exploring predictors of binge drinking among both men and women rather than a gender-specific analysis.