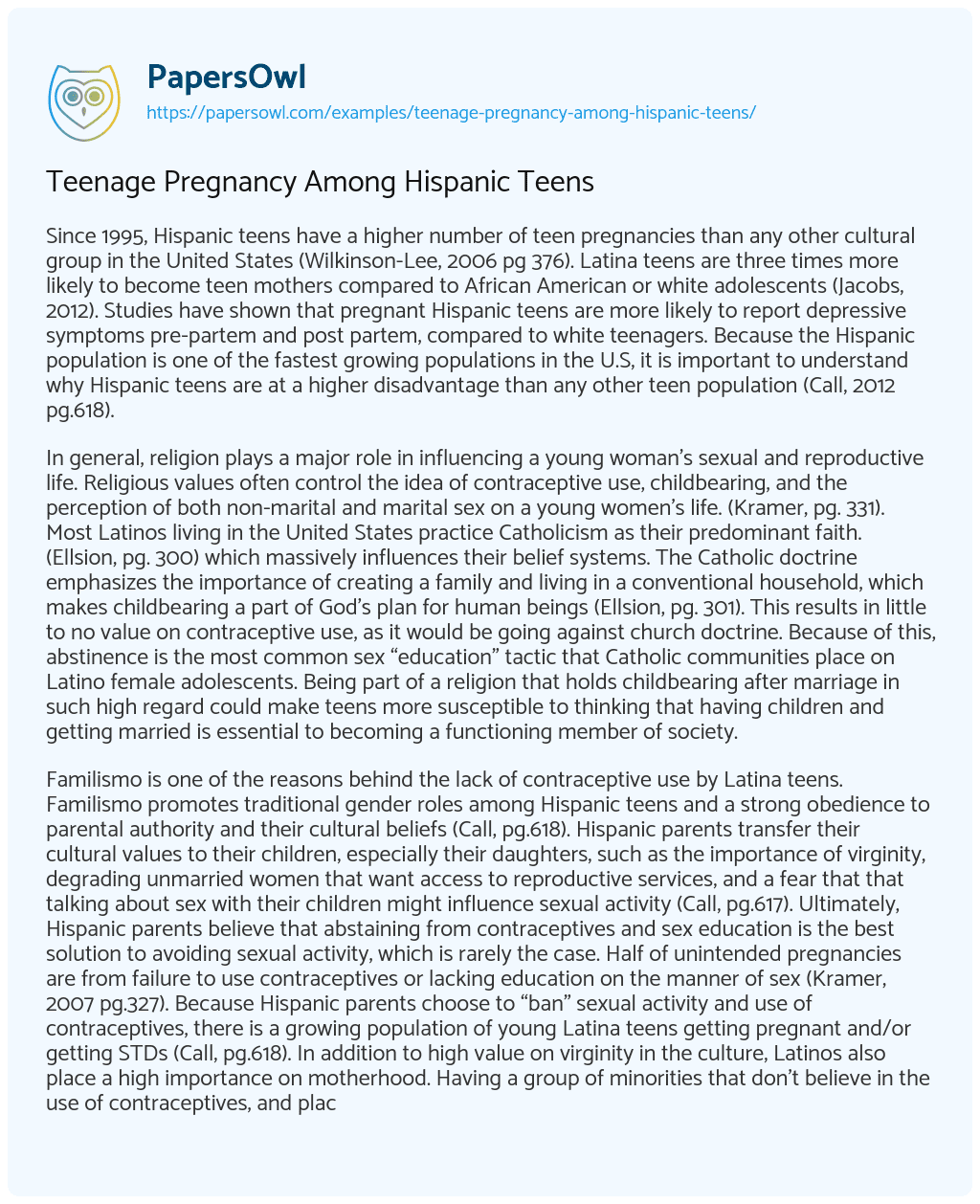 Since 1995, Hispanic teens have a higher number of teen pregnancies than any other cultural group in the United States (Wilkinson-Lee, 2006 pg 376). Latina teens are three times more likely to become teen mothers compared to African American or white adolescents (Jacobs, 2012). Studies have shown that pregnant Hispanic teens are more likely to report depressive symptoms pre-partem and post partem, compared to white teenagers. Because the Hispanic population is one of the fastest growing populations in the U.S, it is important to understand why Hispanic teens are at a higher disadvantage than any other teen population (Call, 2012 pg.618).

In general, religion plays a major role in influencing a young woman’s sexual and reproductive life. Religious values often control the idea of contraceptive use, childbearing, and the perception of both non-marital and marital sex on a young women’s life. (Kramer, pg. 331). Most Latinos living in the United States practice Catholicism as their predominant faith. (Ellsion, pg. 300) which massively influences their belief systems. The Catholic doctrine emphasizes the importance of creating a family and living in a conventional household, which makes childbearing a part of God’s plan for human beings (Ellsion, pg. 301). This results in little to no value on contraceptive use, as it would be going against church doctrine. Because of this, abstinence is the most common sex “education” tactic that Catholic communities place on Latino female adolescents. Being part of a religion that holds childbearing after marriage in such high regard could make teens more susceptible to thinking that having children and getting married is essential to becoming a functioning member of society.

Familismo is one of the reasons behind the lack of contraceptive use by Latina teens. Familismo promotes traditional gender roles among Hispanic teens and a strong obedience to parental authority and their cultural beliefs (Call, pg.618). Hispanic parents transfer their cultural values to their children, especially their daughters, such as the importance of virginity, degrading unmarried women that want access to reproductive services, and a fear that that talking about sex with their children might influence sexual activity (Call, pg.617). Ultimately, Hispanic parents believe that abstaining from contraceptives and sex education is the best solution to avoiding sexual activity, which is rarely the case. Half of unintended pregnancies are from failure to use contraceptives or lacking education on the manner of sex (Kramer, 2007 pg.327). Because Hispanic parents choose to “ban” sexual activity and use of contraceptives, there is a growing population of young Latina teens getting pregnant and/or getting STDs (Call, pg.618). In addition to high value on virginity in the culture, Latinos also place a high importance on motherhood. Having a group of minorities that don’t believe in the use of contraceptives, and place high value on motherhood, leads to a normalization of teen pregnancy. Studies have found that Latina women very often grow up believing that bearing children will lead to ultimate fulfilment (Ellsion, 2012 pg. 300). Thus, young Latinas have less support for academic and career achievement than African- Americans, non-Latino white and Southeast Asian girls (Driscoll, 2001 pg.289).

Becoming a mother regardless of age and socioeconomic status is a major life event stressor with negative effects on mental health (Witworth, 2017 pg. 391). However, it really affects teenage girls. Having children at a young age is associated with depressive symptoms in adulthood. (Witworth 2017 pg. 391). Because Latino parents are more likely to encourage their teenage daughter to give birth if pregnant, teens often find it difficult to consider goals beyond parenthood, leading to a feeling of worthlessness (Driscoll 2001). Although Hispanics respect for women who conceive children, teen mothers tend to be shunned and deprived of the resources needed to properly function( Jacobs, 2012 pg 923). In many instances, when a Latina teen gets pregnant before marriage, the family shuns them for ruining the family name and going against their values. In fact, adolescent mothers have been found to spend most of their young adult years parenting alone and impoverished with little to none economic and social support resources (Huang 2014 pg. 256). The stress that comes with raising a child as a teenage mother without a strong social and financial support has shown to have negative mental and physical consequences for the mother (Driscoll 2001 pg. 227). For instance, Latina teens who had few economic resources as they raised their child, suffered from low self-esteem and had minimal aspirations (Huang 2014 pg. 257), leading to the vicious cycle of poverty in Hispanic populations. The pressure from cultural and religious factors to conceive a child they were not prepared to take care of leads to negative attitudes toward caregiving. Research has found that depressed women are more likely to engage in negative parenting behaviors, which ultimately lead to a child having difficulties reaching developmental milestones, increased struggle with school, anxiety and depression (Huang 2014 pg. 256).

There are ways in which we can approach this health disparity. In California, practitioners who work with teen pregnancy programs targeted specifically for Hispanics, found different approaches to deal with sexual and reproductive health services. The practitioners recognized that there was a cultural and religious barrier, and tried their best to educate the teens about contraceptive usage. For instance, practitioners would tell their clients that the use of birth control is not dirty or shameful, but a part of being a safe teenager who doesn’t want a child at a young age (Caal pg.620). Another attempt in closing the disparity is for parents to openly communicate about sex with their children, instead of having an abstinence approach. There is data that supports that adolescent Latinas who talk to their parents about sex are less likely to become pregnant at a younger age (Driscoll, 2001 pg 291).