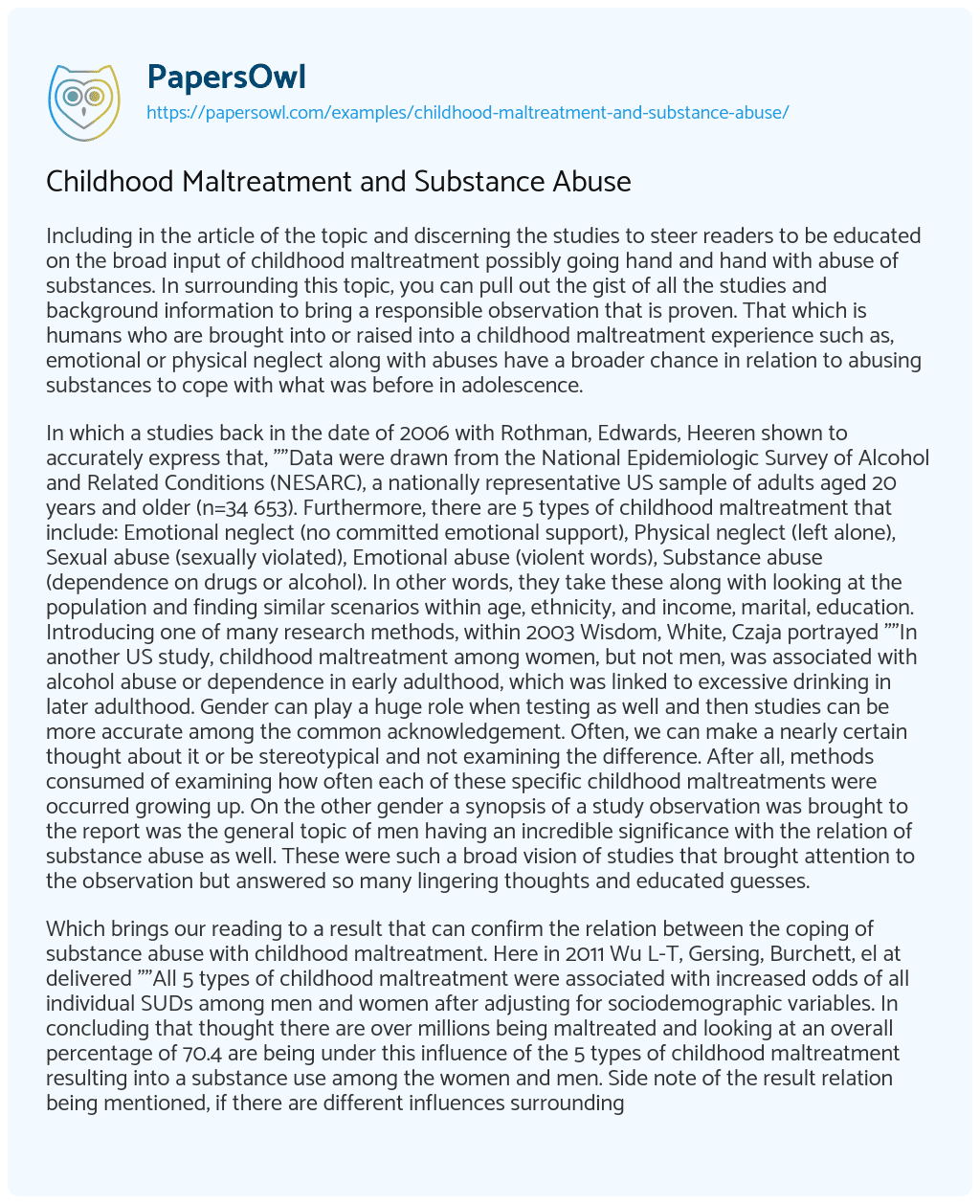 Including in the article of the topic and discerning the studies to steer readers to be educated on the broad input of childhood maltreatment possibly going hand and hand with abuse of substances. In surrounding this topic, you can pull out the gist of all the studies and background information to bring a responsible observation that is proven. That which is humans who are brought into or raised into a childhood maltreatment experience such as, emotional or physical neglect along with abuses have a broader chance in relation to abusing substances to cope with what was before in adolescence.

In which a studies back in the date of 2006 with Rothman, Edwards, Heeren shown to accurately express that, “”Data were drawn from the National Epidemiologic Survey of Alcohol and Related Conditions (NESARC), a nationally representative US sample of adults aged 20 years and older (n=34 653). Furthermore, there are 5 types of childhood maltreatment that include: Emotional neglect (no committed emotional support), Physical neglect (left alone), Sexual abuse (sexually violated), Emotional abuse (violent words), Substance abuse (dependence on drugs or alcohol). In other words, they take these along with looking at the population and finding similar scenarios within age, ethnicity, and income, marital, education. Introducing one of many research methods, within 2003 Wisdom, White, Czaja portrayed “”In another US study, childhood maltreatment among women, but not men, was associated with alcohol abuse or dependence in early adulthood, which was linked to excessive drinking in later adulthood. Gender can play a huge role when testing as well and then studies can be more accurate among the common acknowledgement. Often, we can make a nearly certain thought about it or be stereotypical and not examining the difference. After all, methods consumed of examining how often each of these specific childhood maltreatments were occurred growing up. On the other gender a synopsis of a study observation was brought to the report was the general topic of men having an incredible significance with the relation of substance abuse as well. These were such a broad vision of studies that brought attention to the observation but answered so many lingering thoughts and educated guesses.

Which brings our reading to a result that can confirm the relation between the coping of substance abuse with childhood maltreatment. Here in 2011 Wu L-T, Gersing, Burchett, el at delivered “”All 5 types of childhood maltreatment were associated with increased odds of all individual SUDs among men and women after adjusting for sociodemographic variables. In concluding that thought there are over millions being maltreated and looking at an overall percentage of 70.4 are being under this influence of the 5 types of childhood maltreatment resulting into a substance use among the women and men. Side note of the result relation being mentioned, if there are different influences surrounding the childhood such as a protective environment somewhere or have a better coping mechanism by adapting then they will not end up suffering from the abuse of drugs. Yet still suffering from their trauma but turning to something safer, such as a variety of ways. Certainly, there are ways that are being sought out to be prevented in such ways against childhood maltreatment and hopefully finding a different kind of help in the future of open hands instead of the several substance abuse disorders. That is the hope and strength of the paper is the depth of which they examine the demographic in each group and finding the links from the very beginning. Even going as far as looking at income and making research based off a sliver of the big picture, Topitzes, Mersky, Reynolds earlier in 2009 came up with “”Childhood maltreatment in a low-income sample also predicted later daily cigarette smoking in adulthood, and the relation was equally strong for men and women. Lots of research from different sources to grasp all corners of the question. There was an enjoyment in curiosity throughout the text. On the flip side a weakness that could’ve been expressed to the science more would’ve been to narrow in more to why women are prone to relapsing; even being heavier addicted from childhood maltreatment. Questions of my own are throughout the text and studies over the history or brain structure of a female or male maturity would’ve furthered the strength of this article. In addition, the limitations in the surveys or methods can’t really define if only one thing specific type of the 5 happened or multiple scenarios. It gets messy when looking at the result of the childhood upbringing into let alone anxiety, depression, or any mental disorder before even understanding the substance abuse and the very root of that. A study over humans can have its limitations in all aspects but one can really hold back breaking the barrier of fully grasping the relation.

The author is expressing a point of passion of making a stand for kids and parents’ awareness in the effect of individuals not just as a child but for the lasting effect in their life. In partnering thoughts with what discussions happen around class it defines the different parts of our brain and hormones stimulated to honestly be in sanity. To see which part of our own reward system between the effects and any visible traumatizing event is taken over. It really puts the subject of nature vs, nurture as to being relevant. Especially with looking at the sociodemographic. This topic could be endless with what is conversed over the class because so much goes into what we see, think, or even act upon just by seeing the beginning or moment.

As there is an honest reflection through the journal article my mind is trying to put a lens outside looking in with grieving. Almost sickening to see and feel of what happens around us that can’t be controlled but an awareness of prevention. There is a deeper part of our hearts that can read this and change a posture with what and how we take this on. A digging passion is my posture after concluding this its curiosity on how to guide and walk along a series of destruction.