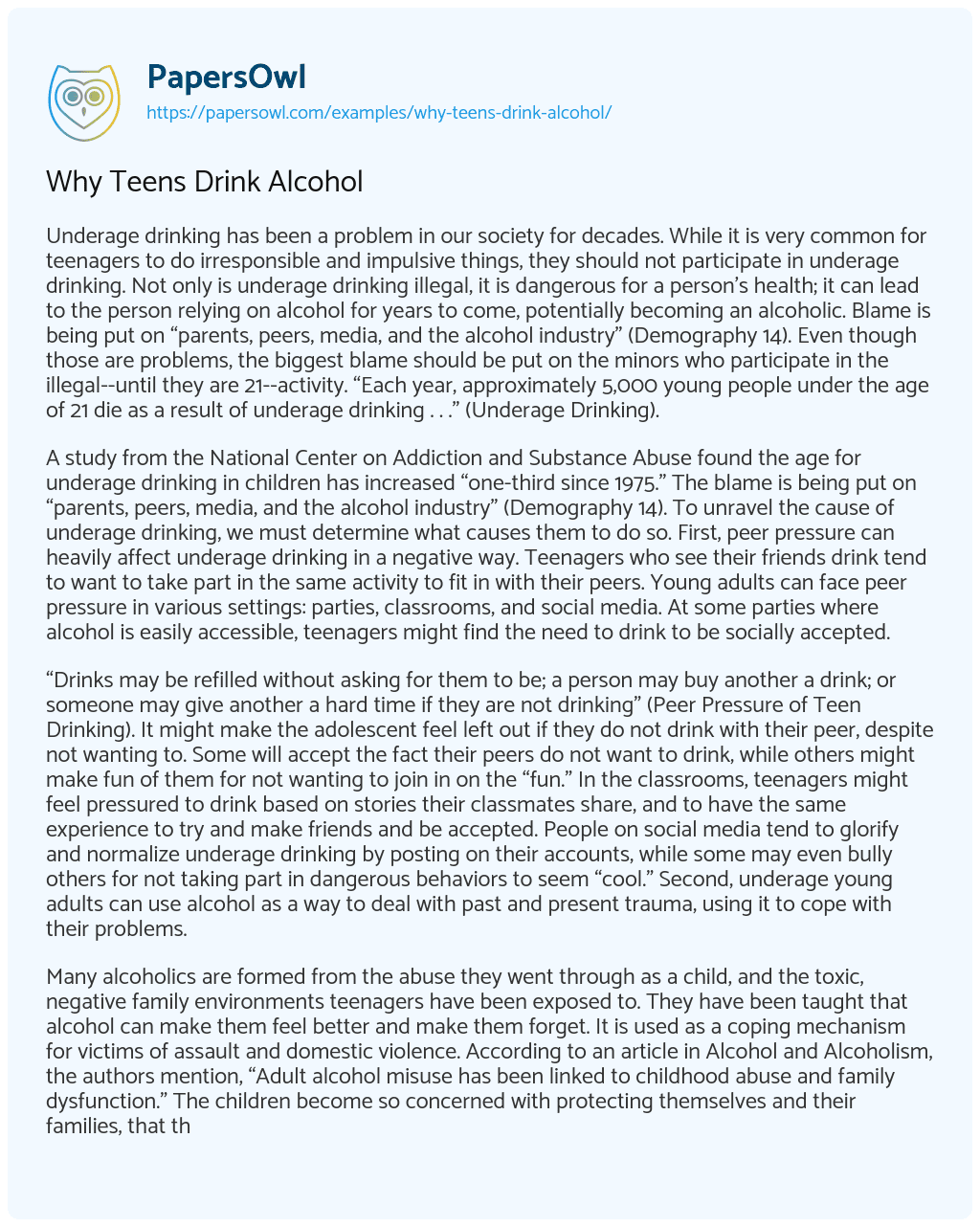 Underage drinking has been a problem in our society for decades. While it is very common for teenagers to do irresponsible and impulsive things, they should not participate in underage drinking. Not only is underage drinking illegal, it is dangerous for a person’s health; it can lead to the person relying on alcohol for years to come, potentially becoming an alcoholic. Blame is being put on “parents, peers, media, and the alcohol industry” (Demography 14). Even though those are problems, the biggest blame should be put on the minors who participate in the illegal–until they are 21–activity. “Each year, approximately 5,000 young people under the age of 21 die as a result of underage drinking . . .” (Underage Drinking).

A study from the National Center on Addiction and Substance Abuse found the age for underage drinking in children has increased “one-third since 1975.” The blame is being put on “parents, peers, media, and the alcohol industry” (Demography 14). To unravel the cause of underage drinking, we must determine what causes them to do so. First, peer pressure can heavily affect underage drinking in a negative way. Teenagers who see their friends drink tend to want to take part in the same activity to fit in with their peers. Young adults can face peer pressure in various settings: parties, classrooms, and social media. At some parties where alcohol is easily accessible, teenagers might find the need to drink to be socially accepted.

“Drinks may be refilled without asking for them to be; a person may buy another a drink; or someone may give another a hard time if they are not drinking” (Peer Pressure of Teen Drinking). It might make the adolescent feel left out if they do not drink with their peer, despite not wanting to. Some will accept the fact their peers do not want to drink, while others might make fun of them for not wanting to join in on the “fun.” In the classrooms, teenagers might feel pressured to drink based on stories their classmates share, and to have the same experience to try and make friends and be accepted. People on social media tend to glorify and normalize underage drinking by posting on their accounts, while some may even bully others for not taking part in dangerous behaviors to seem “cool.” Second, underage young adults can use alcohol as a way to deal with past and present trauma, using it to cope with their problems.

Many alcoholics are formed from the abuse they went through as a child, and the toxic, negative family environments teenagers have been exposed to. They have been taught that alcohol can make them feel better and make them forget. It is used as a coping mechanism for victims of assault and domestic violence. According to an article in Alcohol and Alcoholism, the authors mention, “Adult alcohol misuse has been linked to childhood abuse and family dysfunction.” The children become so concerned with protecting themselves and their families, that they disregard all other aspects of life. Teenagers Adolescents tend to turn to alcohol when they do not have anybody speak to about their mental health. Using alcohol helps numb the pain from everything they are going through. Teenagers who began during at a young age to help cope with trauma, have a higher risk of becoming alcoholics in adulthood. Teenagers are more likely to binge drink because their urge level has not fully developed. Next, many teenagers have easy access to alcohol, whether it being in a liquor cabinet at home, or bought by other friends. The availability of alcohol can also be determined by parents. A number of parents tend to look the other way when it comes to their underage children consuming alcohol, while some may even encourage it along with providing their children the alcohol; the parents see it as an initiation of reaching maturity. Allowing underage teenagers to drink in the premises of their home, teaches them it is acceptable to drink anywhere and everywhere. Some parents condone underage drinking, because they do not see the harm in providing their teenagers alcohol or allowing them to drink.

Alcohol is very easy for minors to get their hands on, which to them means they can drink if they can get it. It is very easy for adolescents to find alcohol in any home they are in. Alcohol is a big influence in my cultures around the world, including ours. Lastly, parental influence can have a negative impact on teenagers consuming alcohol. Some parents coax their underage children into drinking by starting them off with sips, which can eventually lead the teenager to drink more, no matter if the parents continue to condone the behavior. Guardians may even provide the adolescents with the alcohol, which can cause adolescents to drink heavily as they get older, unless parents put a stop to it now. Parents have the biggest influence on who the kind of person their children will become. According to an article in the Lincoln Star Journal, “. . . the younger kids start to experiment with alcohol, the more at risk they become for other dangerous behaviors . . .” (Teen Drinking). Parents need to start talking to their children about the dangers of underage drinking, and the long term effects it can have on a person. Causes of underage drinking can vary from peer pressure, trauma, the availability of alcohol, and parental influence.
Many people see it as a part of growing up, but it is dangerous to our society. Many accidents, injuries, and deaths have been reported from the driver being intoxicated. Teenagers who do begin drinking at a young age have a higher risk developing alcoholism, as well as other long term consequences it can have on their health as well as body.

Why Teens Drink Alcohol. (2021, May 20). Retrieved from https://papersowl.com/examples/why-teens-drink-alcohol/