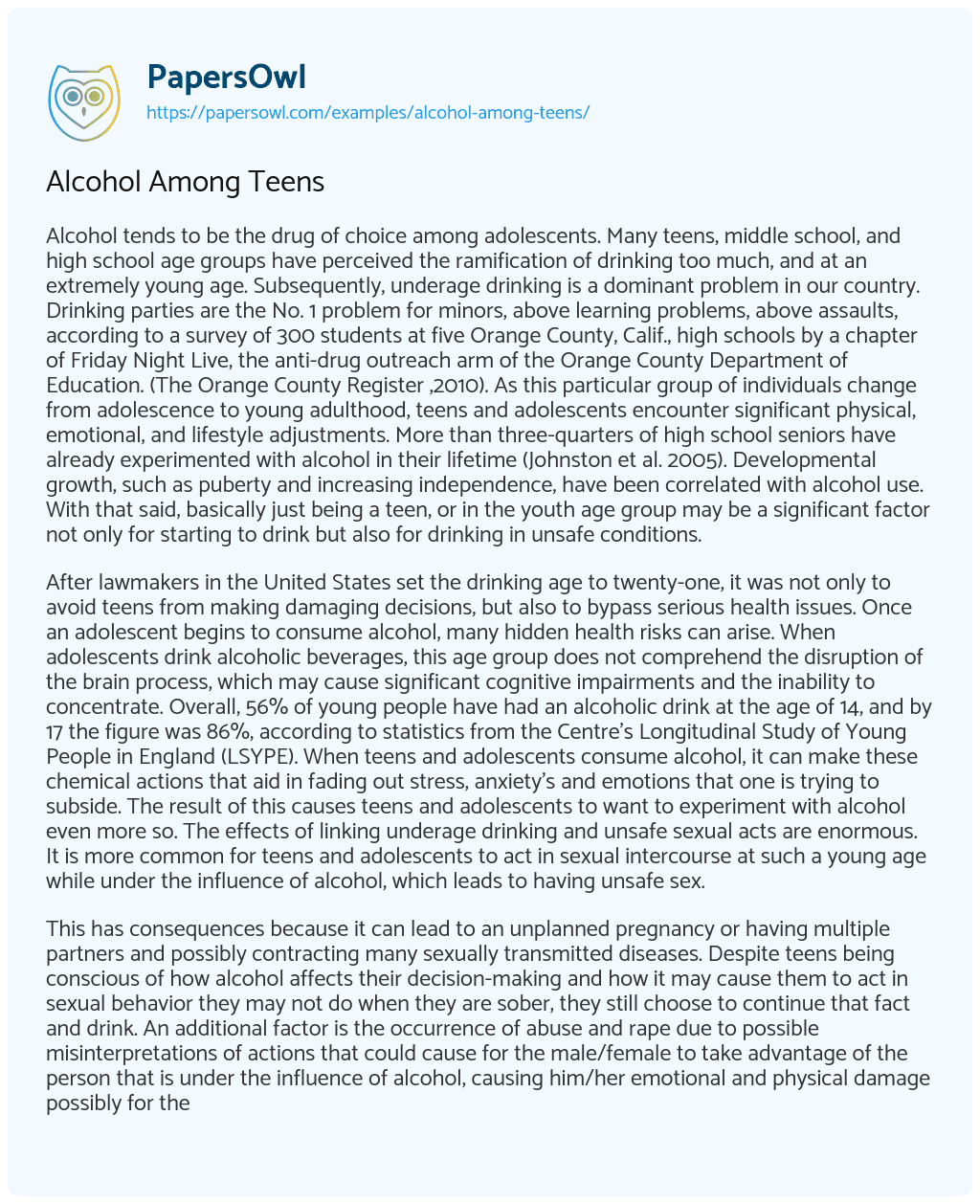 Alcohol tends to be the drug of choice among adolescents. Many teens, middle school, and high school age groups have perceived the ramification of drinking too much, and at an extremely young age. Subsequently, underage drinking is a dominant problem in our country. Drinking parties are the No. 1 problem for minors, above learning problems, above assaults, according to a survey of 300 students at five Orange County, Calif., high schools by a chapter of Friday Night Live, the anti-drug outreach arm of the Orange County Department of Education. (The Orange County Register ,2010). As this particular group of individuals change from adolescence to young adulthood, teens and adolescents encounter significant physical, emotional, and lifestyle adjustments. More than three-quarters of high school seniors have already experimented with alcohol in their lifetime (Johnston et al. 2005). Developmental growth, such as puberty and increasing independence, have been correlated with alcohol use. With that said, basically just being a teen, or in the youth age group may be a significant factor not only for starting to drink but also for drinking in unsafe conditions.

After lawmakers in the United States set the drinking age to twenty-one, it was not only to avoid teens from making damaging decisions, but also to bypass serious health issues. Once an adolescent begins to consume alcohol, many hidden health risks can arise. When adolescents drink alcoholic beverages, this age group does not comprehend the disruption of the brain process, which may cause significant cognitive impairments and the inability to concentrate. Overall, 56% of young people have had an alcoholic drink at the age of 14, and by 17 the figure was 86%, according to statistics from the Centre’s Longitudinal Study of Young People in England (LSYPE). When teens and adolescents consume alcohol, it can make these chemical actions that aid in fading out stress, anxiety’s and emotions that one is trying to subside. The result of this causes teens and adolescents to want to experiment with alcohol even more so. The effects of linking underage drinking and unsafe sexual acts are enormous. It is more common for teens and adolescents to act in sexual intercourse at such a young age while under the influence of alcohol, which leads to having unsafe sex.

This has consequences because it can lead to an unplanned pregnancy or having multiple partners and possibly contracting many sexually transmitted diseases. Despite teens being conscious of how alcohol affects their decision-making and how it may cause them to act in sexual behavior they may not do when they are sober, they still choose to continue that fact and drink. An additional factor is the occurrence of abuse and rape due to possible misinterpretations of actions that could cause for the male/female to take advantage of the person that is under the influence of alcohol, causing him/her emotional and physical damage possibly for the reminder of life. alcohol cause health problems but it is not limited to just that, it is also correlates with suicide. Studies have found that among teens and youth age groups, alcohol use are more frequent. Teens and adolescents who struggle depression and anxiety feel as though when they consume alcohol, they will feel unbothered by those feelings, but sadly that does not let them the escape those feelings for too long, causing teens to feel even be more depressed then before. Teen alcohol abuse is not only a health problem, but it also causes for some teens to take their lives away.

The effects of driving after consuming alcohol has received tremendous attention causing the media and others to ask state representatives to adjust policy. With that said, many laws have been passed to lower blood alcohol levels for underage drivers to a zero-tolerance level to better prevent teens and adolescents age groups from making lethal decisions. Teens and adolescents who drive after consuming alcohol are severely likely to get into an accident, then teens and adolescents who do not consume alcohol. Teens who are involved in an alcohol-related crash have a higher number of injuries and deaths, than adult drivers. Teens and adolescents tend to dismiss the dangers and consequences of getting into a car with a drunk driver and make the ill decision of not refusing and go against their better judgement. For example, adolescents who have been drinking are less like to secure themselves with safety belt and then will get into a car with an intoxicated driver and not care about what can occur. With underage drinkers they more likely to dismiss the dangers of getting into a vehicle under the influence and do not think of others on the road as well as how it may end in death or a serious injury that may change their life forever.

Families can contribute to underage drinking or can experience the negative consequences of a youth’s drinking behavior. Family crisis may occur when teens start to have health problems, dropping out of school, or get into trouble with the law due to drinking. A family may have a hard time trying to figure out how to stop their child from drinking. This puts a strain on the family because the needs of other family members’ may be forgotten. Also, relatives may battle to control the circumstances, becoming angry, bringing about sentiments of blame and pointing the finger at themselves and other relatives for the problem. Family members may also try to protect the underage drinker from consequences by protecting the child by utilizing money and possessions to aid happiness instead of dealing with the root of the problem directly. This is a problem because the child may take advantage of this aid and instead of helping the situation to improve; it just jeopardizes any kind of progress. Unfortunately, alcohol does not only affect illegally, but it also creates problems within the family.

Last by not least, underage drinking also has economic consequences to society. This cost includes rebuilding property damage, removing vehicles after traffic crashes, medical care, and legal fees. Families may have to spend money on treatments like rehabilitation facilities, medical services and insurance to help that teen recover. Not only is this a big weight for the parents, but also additionally the parents may lose money driving that child to appointments for their treatment or taking off work to accompany the children on appointments and court dates. These are all issues that parents go through when an underage drinker gets into problems with the law.

In this Generation, it is becoming more common for young teens to drink alcohol at an early age causing underage drinking. Alcohol is a psychoactive drug that youths consume without thinking of the consequences it has on their developing bodies. There has always been a debate on whether it would be appropriate to reduce the drinking age as it was before. After much research, I am opposed to reducing the drinking age. In my opinion, reducing the drinking age would just cause further problems for the youth because of the effect’s alcohol has. Although it is common for people to view drinking alcohol as a typical phase for adolescents and youths, what many fails to realize is the harsh reality alcohol carries. Unfortunately, these realities do not only affect the health, but it ruins lives as well. All in all, the drinking age should not be reduced because of the effects it has short and long-term on the youth.