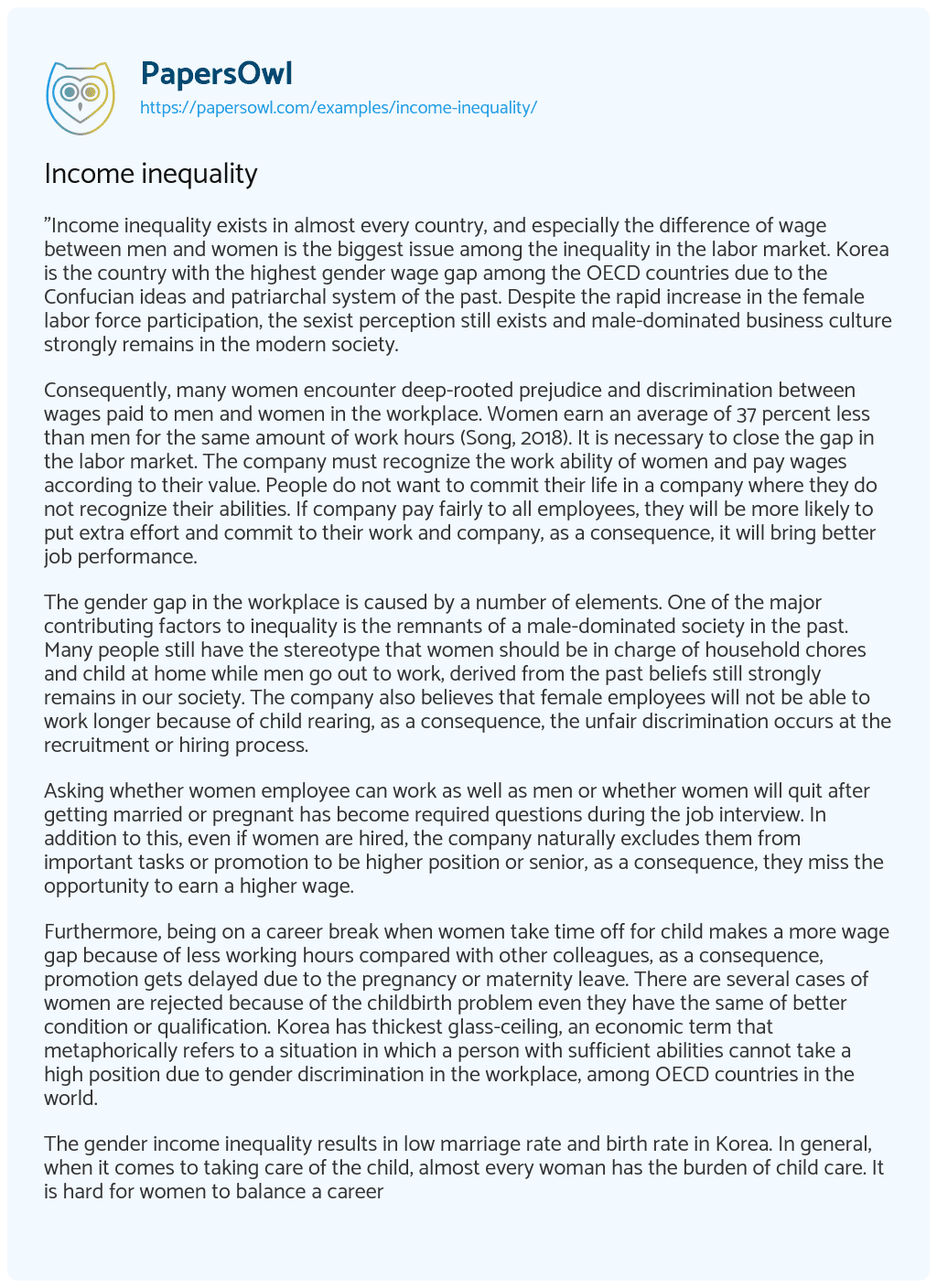 “Income inequality exists in almost every country, and especially the difference of wage between men and women is the biggest issue among the inequality in the labor market. Korea is the country with the highest gender wage gap among the OECD countries due to the Confucian ideas and patriarchal system of the past. Despite the rapid increase in the female labor force participation, the sexist perception still exists and male-dominated business culture strongly remains in the modern society.

Consequently, many women encounter deep-rooted prejudice and discrimination between wages paid to men and women in the workplace. Women earn an average of 37 percent less than men for the same amount of work hours (Song, 2018). It is necessary to close the gap in the labor market. The company must recognize the work ability of women and pay wages according to their value. People do not want to commit their life in a company where they do not recognize their abilities. If company pay fairly to all employees, they will be more likely to put extra effort and commit to their work and company, as a consequence, it will bring better job performance.

The gender gap in the workplace is caused by a number of elements. One of the major contributing factors to inequality is the remnants of a male-dominated society in the past. Many people still have the stereotype that women should be in charge of household chores and child at home while men go out to work, derived from the past beliefs still strongly remains in our society. The company also believes that female employees will not be able to work longer because of child rearing, as a consequence, the unfair discrimination occurs at the recruitment or hiring process.

Asking whether women employee can work as well as men or whether women will quit after getting married or pregnant has become required questions during the job interview. In addition to this, even if women are hired, the company naturally excludes them from important tasks or promotion to be higher position or senior, as a consequence, they miss the opportunity to earn a higher wage.

Furthermore, being on a career break when women take time off for child makes a more wage gap because of less working hours compared with other colleagues, as a consequence, promotion gets delayed due to the pregnancy or maternity leave. There are several cases of women are rejected because of the childbirth problem even they have the same of better condition or qualification. Korea has thickest glass-ceiling, an economic term that metaphorically refers to a situation in which a person with sufficient abilities cannot take a high position due to gender discrimination in the workplace, among OECD countries in the world.

The gender income inequality results in low marriage rate and birth rate in Korea. In general, when it comes to taking care of the child, almost every woman has the burden of child care. It is hard for women to balance a career and a family. This is mainly why women are choosing to be single due to the burden for marriage. They hesitate to use maternity leave or childcare leave due to the fear that they would be unable to return to their work again because of the career break. Consequently, women postpones their marriage for devoting more time to their career.

They would like to live their life for themselves rather than the life of being someone’s mother or wife. The formula ‘marriage = sacrifice’ has already become prevalent in our society. Consequently, unlike the previous society of large family structure with several siblings, since the 1970s, the family is getting smaller and the nuclear family is becoming common. Having a child used to be an essential element of the family, but in recently, it is not required.

The government is trying to establish more policies for better child care options. It subsidizes several child care policies included giving the payment of before and after childbirth, maternity protection system for mom, paternity leave bonus for dad, and reduction of working hours for mother with child under age of 8 as a mandatory. These newly revised childcare support systems in 2019 will help to create a balance between work and childcare.

Now, there is no need to be reluctant to use paternity leave under the law. The fine will be imposed to company if they refuse the application for leave of absence. Unlike company only focuses on profits and neglect social issues in the previous day, these changed policies will give equal and fair opportunity without any disadvantage in recruitment and promotion process. In addition to this, women need to step forward to fight against to the unequal discrimination by negotiating with the company. According to the research, 57 percent of male employees ask for higher wages toward to the company, while only 8 percent of female did (add in-text citation).

Additionally, the government tries to create an environment in which parents can nurture their children well. It will reduce the number of children had grown up neglected and had difficulty in building strong bonds with parents in a dual income family. In addition to this, most husbands regard housework and childcare as the responsibility of the wife even both of them are double income parents. They need to help their wife for reducing her burden of child rearing and household chores. It is necessary to change the consciousness to reduce the burden of housework for women of dual-income families. The issue of gender income inequality in the labor market is crucial to be solved in our society. I hope that the above policies will be utilized to close the gender wage gap and strengthen the position of female employees within the company.”