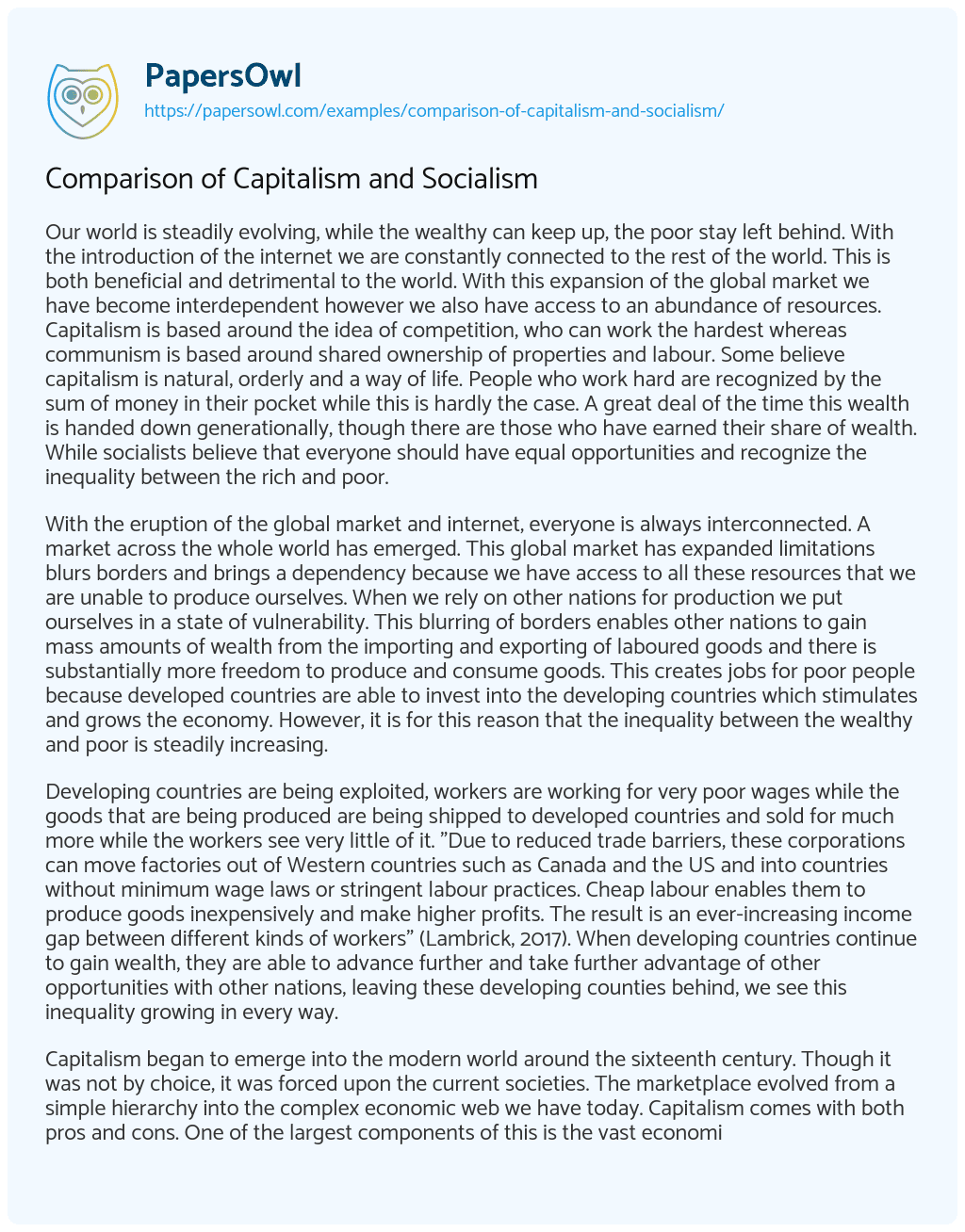 Our world is steadily evolving, while the wealthy can keep up, the poor stay left behind. With the introduction of the internet we are constantly connected to the rest of the world. This is both beneficial and detrimental to the world. With this expansion of the global market we have become interdependent however we also have access to an abundance of resources. Capitalism is based around the idea of competition, who can work the hardest whereas communism is based around shared ownership of properties and labour. Some believe capitalism is natural, orderly and a way of life. People who work hard are recognized by the sum of money in their pocket while this is hardly the case. A great deal of the time this wealth is handed down generationally, though there are those who have earned their share of wealth. While socialists believe that everyone should have equal opportunities and recognize the inequality between the rich and poor.

With the eruption of the global market and internet, everyone is always interconnected. A market across the whole world has emerged. This global market has expanded limitations blurs borders and brings a dependency because we have access to all these resources that we are unable to produce ourselves. When we rely on other nations for production we put ourselves in a state of vulnerability. This blurring of borders enables other nations to gain mass amounts of wealth from the importing and exporting of laboured goods and there is substantially more freedom to produce and consume goods. This creates jobs for poor people because developed countries are able to invest into the developing countries which stimulates and grows the economy. However, it is for this reason that the inequality between the wealthy and poor is steadily increasing.

Developing countries are being exploited, workers are working for very poor wages while the goods that are being produced are being shipped to developed countries and sold for much more while the workers see very little of it. “Due to reduced trade barriers, these corporations can move factories out of Western countries such as Canada and the US and into countries without minimum wage laws or stringent labour practices. Cheap labour enables them to produce goods inexpensively and make higher profits. The result is an ever-increasing income gap between different kinds of workers” (Lambrick, 2017). When developing countries continue to gain wealth, they are able to advance further and take further advantage of other opportunities with other nations, leaving these developing counties behind, we see this inequality growing in every way.

Capitalism began to emerge into the modern world around the sixteenth century. Though it was not by choice, it was forced upon the current societies. The marketplace evolved from a simple hierarchy into the complex economic web we have today. Capitalism comes with both pros and cons. One of the largest components of this is the vast economic liberty for anyone. Anybody is able to act in their own self-interest, decide where they want to work, produce anything, decide how much to produce. Anybody is able to own private property. Generally the idea is whoever works the hardest, earns the most however this idea is not always correct. Though people do prosper because of their own enterprise, a lot of times people come from a place of privilege and are handed property and money. It is about gaining as much money as possible by paying out as little as possible. “Its new freedoms were precious achievements for those individuals who formerly had been deprived of the right to enter into legal contracts…

Even for some of the poorest classes, the freedom of economic contract was a chance to rise from a station in life from which, in earlier times, there had been almost no exit. But economic freedom also had a harsher side. This was the necessity to stay afloat by one’s own efforts” (Heilbroner, Thurow, 1998). Out of this, the top 1% has emerged, they have taken this idea of survival of the fittest to the extreme. There are eight men that own more than 50% of the world’s wealth and they are steadily becoming more wealthy while the poor stay poor.  Capitalists believe capitalism to be a natural system.

Karl Marx is one of the most well known socialists. He believed in economic freedom through the recognition of others. He understood the massive inequality of wealth and wanted to eliminate this gap. He saw that the ones with wealth had more opportunities from. From this socialist point of view, capitalism is a massive injustice and it bring this idea of redistribution of wealth among everyone and an idea of shared ownership. “Socialism ultimately advocates replacing our global capitalist economy with the equitable redistribution of wealth among all members of society according to the principle of collective ownership. The aim is to establish an equality of condition such that all members of society enjoy the same material standard of living” (Herman, 2018). This is so that every member of society is able to have equal rights. For instance, equal chance for job opportunities and same quality of life. If taken far enough it could be considered communism.

There really is no middle grounds between the two, we can either have capitalism or socialism. Capitalists view it to be orderly, and if you’re wealthy then you have earned it because you have worked for it. However this is not always true, in the past generations a wealth divide was created from westerners through the use of slavery and the genocide of indigenous people. This wealth has been passed down through generations so the rich stay rich. Although some people do earn their wealth, it is more often that people come from a place of privilege. From a socialist point of view, this wealth inequality can be solved by heavily taxing the rich and creating a redistribution so that everybody has an equal standard of life. The socialist recognizes that the idea of working hard equates to wealth is untrue more often than not. The rich would not give up their wealth for people who have not necessarily earned it, rather than believing that everyone is equal and deserves an equal life.

Comparison of Capitalism and Socialism. (2019, Oct 08). Retrieved from https://papersowl.com/examples/comparison-of-capitalism-and-socialism/