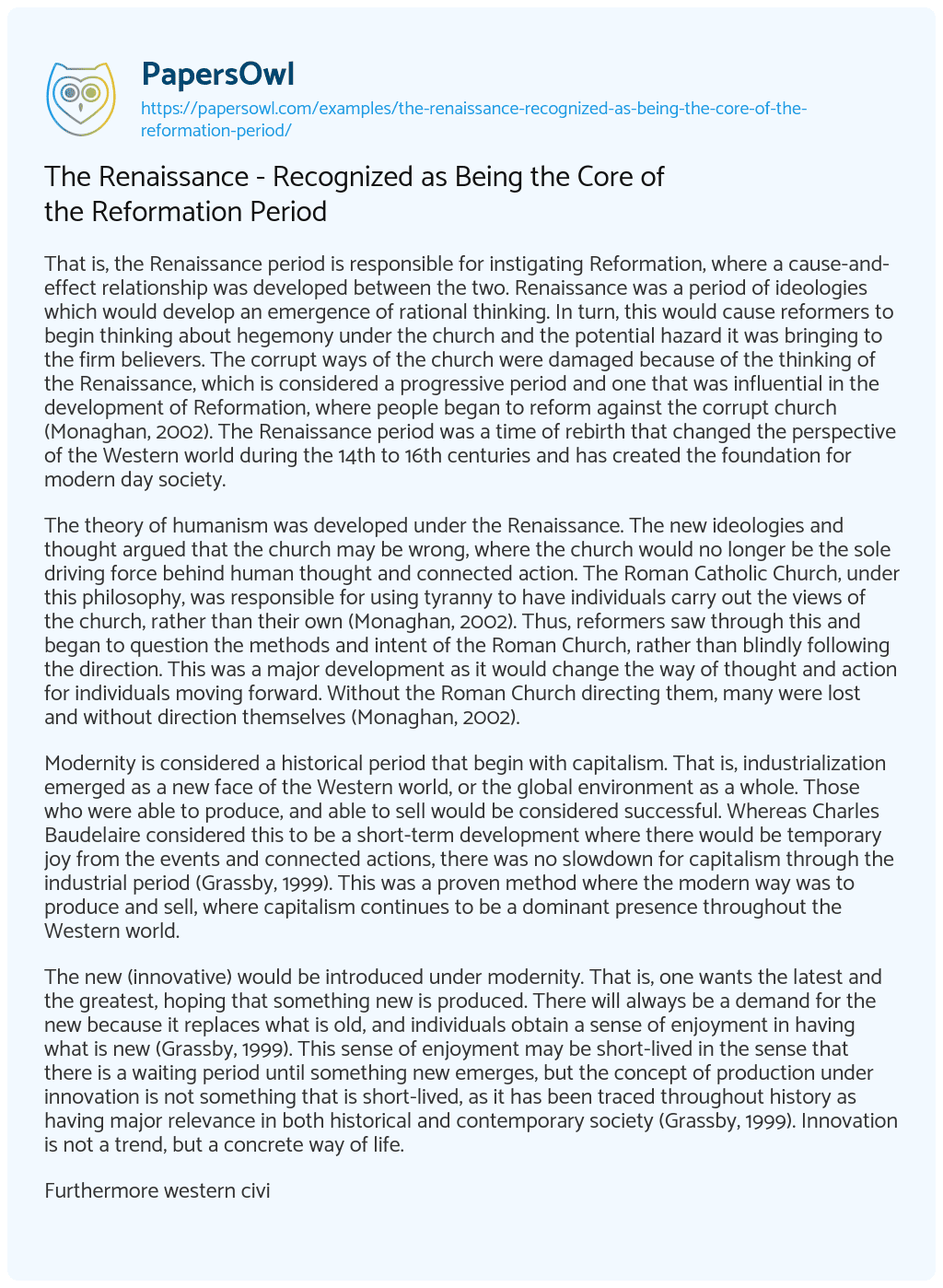 That is, the Renaissance period is responsible for instigating Reformation, where a cause-and-effect relationship was developed between the two. Renaissance was a period of ideologies which would develop an emergence of rational thinking. In turn, this would cause reformers to begin thinking about hegemony under the church and the potential hazard it was bringing to the firm believers. The corrupt ways of the church were damaged because of the thinking of the Renaissance, which is considered a progressive period and one that was influential in the development of Reformation, where people began to reform against the corrupt church (Monaghan, 2002). The Renaissance period was a time of rebirth that changed the perspective of the Western world during the 14th to 16th centuries and has created the foundation for modern day society.

The theory of humanism was developed under the Renaissance. The new ideologies and thought argued that the church may be wrong, where the church would no longer be the sole driving force behind human thought and connected action. The Roman Catholic Church, under this philosophy, was responsible for using tyranny to have individuals carry out the views of the church, rather than their own (Monaghan, 2002). Thus, reformers saw through this and began to question the methods and intent of the Roman Church, rather than blindly following the direction. This was a major development as it would change the way of thought and action for individuals moving forward. Without the Roman Church directing them, many were lost and without direction themselves (Monaghan, 2002).

Modernity is considered a historical period that begin with capitalism. That is, industrialization emerged as a new face of the Western world, or the global environment as a whole. Those who were able to produce, and able to sell would be considered successful. Whereas Charles Baudelaire considered this to be a short-term development where there would be temporary joy from the events and connected actions, there was no slowdown for capitalism through the industrial period (Grassby, 1999). This was a proven method where the modern way was to produce and sell, where capitalism continues to be a dominant presence throughout the Western world.

The new (innovative) would be introduced under modernity. That is, one wants the latest and the greatest, hoping that something new is produced. There will always be a demand for the new because it replaces what is old, and individuals obtain a sense of enjoyment in having what is new (Grassby, 1999). This sense of enjoyment may be short-lived in the sense that there is a waiting period until something new emerges, but the concept of production under innovation is not something that is short-lived, as it has been traced throughout history as having major relevance in both historical and contemporary society (Grassby, 1999). Innovation is not a trend, but a concrete way of life.

Furthermore western civilizations would boom under industrialization and the idea of capitalism. The models of modernity in New York and Chicago, for example, highlighted what was occurring throughout Western society. The principles were changing, where producing and selling were becoming a way of life, and a necessity. The vibrant industry that would emerge changed how individuals thought, just as the Renaissance period did (Monaghan, 2002). Moving forward, one would understand how this is not a trend that would change, but one that would force those in the Western world to adapt their own styles to meet the industrial demands.

As for the Protestant Reformation period, it was recognized as a time of revolt. Specifically, there was revolt against corruption, abuse, discrimination, and other forms of mistreatment at the hands of the Roman Church. Martin Luther is recognized as the responsible figure behind the Reformation, nailing a 95-point manifesto on the door of All Saints Church in Wittenberg, Germany. Christianity would forever be split between Catholics and Protestants. Naturally, art was influential during the period. People looked to art for expression, where art took many forms throughout history. The connection between art and religion was strong during the Reformation, as it is strong today. During the Reformation period art was responsible for shaping the way people responded to events. Stories were told through art during this historic period, where one can make a connection to the modern environment, as art still tells stories today.

As a result a new method of Christian art would develop during the Reformation period. This was in celebration of the Protestant religious initiative. It was a radical delivery emerging from the High Renaissance art of Spain, Italy, Naples, and other regions of southern Europe – these were regions that remained Roman Catholic – art, however, was a way for the Protestants to express their feelings with the Church, and their separation (Kleiner, 2009). Protestant art was done through painting, where unvarnished and personal Christian art would be put on display (Kleiner, 2009). This was considered plain by the critics, but this was not necessarily a bad thing, as plain art also told a story and was able to depict the events and feelings of the period. The Christians took the personal approach to art, which was a transition in the way art would be exposed throughout the Reformation period and beyond (Kleiner, 2009).

The Protestant Church and the accompanying bodies were no longer responsible for commissioning Biblical art (Kleiner, 2009). Protestant art collectors, however, would continue to commission religious paintings (privately) from artists. Rembrandt is perhaps the most critical example of an artist who was in high demand during this period, where a private approach was taken to art. Below one will recognize Rembrandt’s piece titled “”Supper at Emmaus,”” painted in 1648 (Zell, 2002). This is one of several paintings where Rembrandt showed this exact scene (Zell, 2002). However, he resisted painting this, even though it was one of his favorites. Even during periods where his commissions were low, Rembrandt wanted to save this piece, and would resist painting it until the time was right (Zell, 2002).

The Renaissance established an ideological shift concerning the role of art. It emphasized the connection between art, politics and social life. The societal elite had distinct appreciation for artists who served in the King’s courts and palaces. It is from this period that legends like Michelangelo and Leonardo da Vinci emerged to be considered among the greats (Carney, 2001). As depicted, art was beyond the common man; its place was with the wealthy and powerful, the lords and the elite. Renaissance essentially gave new meaning to art, where the social masses became involved and gained an appreciation for the artistic ability of these geniuses.

The Protestant Reformation was significant toward changing Europe. This reformation directly divided Western Christianity. Doing so re-shaped Europe’s religious and political values. It influenced the prior perception and altered the culture overall. Initially, the Protestant Reformation changed the views people had on Faith. Instead of the single monolithic approach that people were accustomed to, the change resulted to the competing creed (Patrick, 2007). This was a ground-breaking initiative and philosophy as the order of structure and how individuals viewed society would be changed with these new developments. The awakening that was present during the Renaissance period had a deep connection with people and how they viewed themselves (Carney, 2001).

The Protestant Reformation witnessed a number of leaders try to air their views. Despite this, most of them failed. Martin Luther and John Calvin succeeded, but doing so was not easy. According to Luther, success was enhanced by the fact that he was different from the previous reformers. Whereas the previous reformers put their emphasis on attacking the church’s corrupt practices, Luther sought to address the root of the problem (the doctrine of grace and redemption). This approach was shared by John Calvin. Luther is known to have attacked the church’s indulgence system (Carney, 2001). He further stressed the fact that the pope lacked the authority over purgatory, arguing that the doctrine of merits lacked a relevant foundation in the gospel. The direct approach ensured the two succeeded where others failed.

The Reformation and Renaissance was a period of inspiration as it connected to art. Individuals took on a new form of art, and appreciated it because of the messages within. There was a change in the way they saw religion and the Church, and this showed in art. However, art was a bridge that kept them connected to history, where art is telling a story. The paintings that have been recognized are examples of a story that is being told through art, which was needed during the Reformation period to bring people together.

The Church was no longer where people went to direction; they saw direction in themselves. That is, the Renaissance created the Reformation because the people saw a new way of thinking. This developed into the Church having less control, which was unprecedented. To say that the Reformation would have occurred without the Renaissance would be failing to give credit to the period and the mentality of individuals.

The Renaissance - Recognized as Being the Core of the Reformation Period. (2019, Sep 24). Retrieved from https://papersowl.com/examples/the-renaissance-recognized-as-being-the-core-of-the-reformation-period/