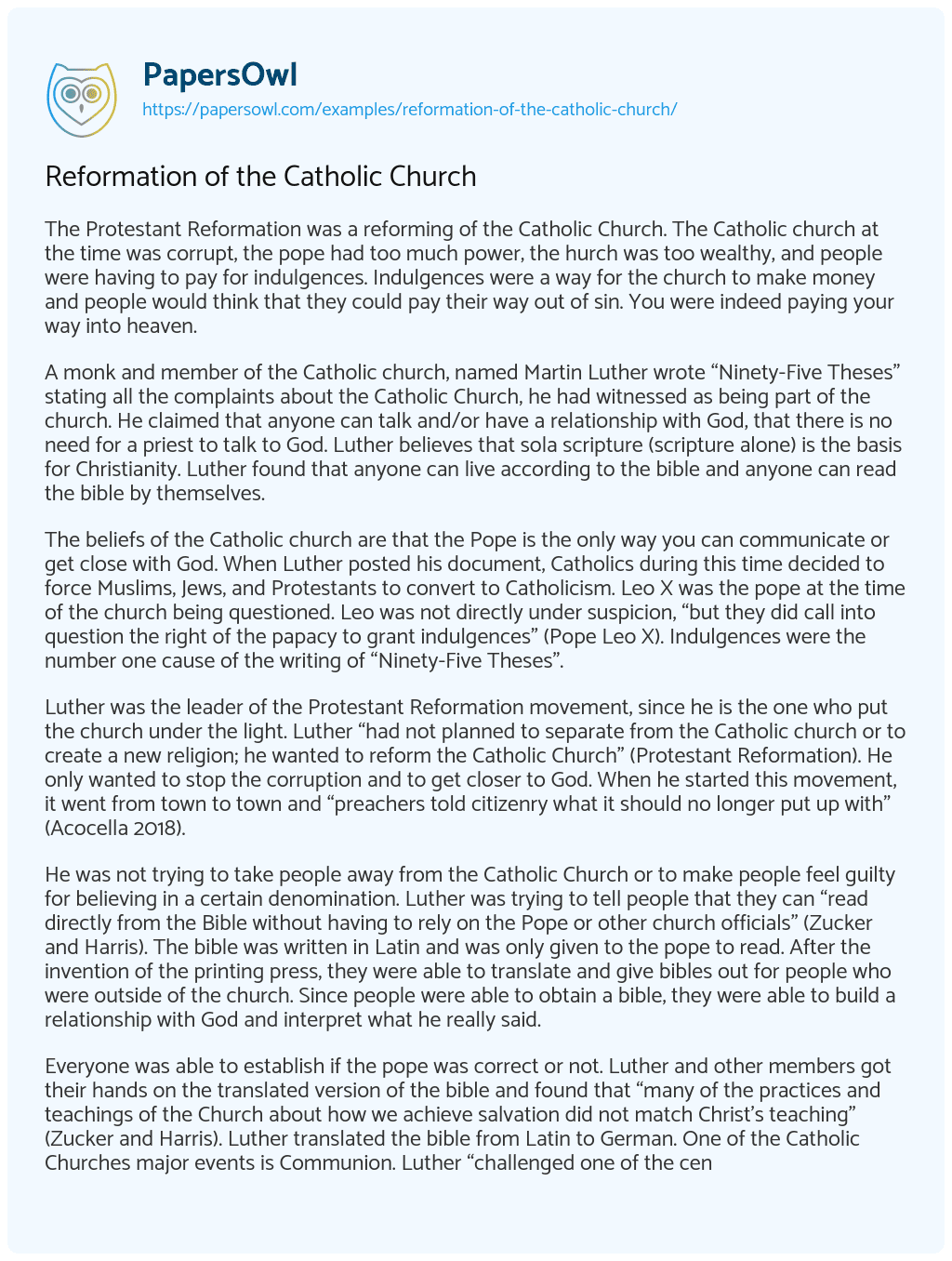 The Protestant Reformation was a reforming of the Catholic Church. The Catholic church at the time was corrupt, the pope had too much power, the hurch was too wealthy, and people were having to pay for indulgences. Indulgences were a way for the church to make money and people would think that they could pay their way out of sin. You were indeed paying your way into heaven.

A monk and member of the Catholic church, named Martin Luther wrote “Ninety-Five Theses” stating all the complaints about the Catholic Church, he had witnessed as being part of the church. He claimed that anyone can talk and/or have a relationship with God, that there is no need for a priest to talk to God. Luther believes that sola scripture (scripture alone) is the basis for Christianity. Luther found that anyone can live according to the bible and anyone can read the bible by themselves.

The beliefs of the Catholic church are that the Pope is the only way you can communicate or get close with God. When Luther posted his document, Catholics during this time decided to force Muslims, Jews, and Protestants to convert to Catholicism. Leo X was the pope at the time of the church being questioned. Leo was not directly under suspicion, “but they did call into question the right of the papacy to grant indulgences” (Pope Leo X). Indulgences were the number one cause of the writing of “Ninety-Five Theses”.

Luther was the leader of the Protestant Reformation movement, since he is the one who put the church under the light. Luther “had not planned to separate from the Catholic church or to create a new religion; he wanted to reform the Catholic Church” (Protestant Reformation). He only wanted to stop the corruption and to get closer to God. When he started this movement, it went from town to town and “preachers told citizenry what it should no longer put up with” (Acocella 2018).

He was not trying to take people away from the Catholic Church or to make people feel guilty for believing in a certain denomination. Luther was trying to tell people that they can “read directly from the Bible without having to rely on the Pope or other church officials” (Zucker and Harris). The bible was written in Latin and was only given to the pope to read. After the invention of the printing press, they were able to translate and give bibles out for people who were outside of the church. Since people were able to obtain a bible, they were able to build a relationship with God and interpret what he really said.

Everyone was able to establish if the pope was correct or not. Luther and other members got their hands on the translated version of the bible and found that “many of the practices and teachings of the Church about how we achieve salvation did not match Christ’s teaching” (Zucker and Harris). Luther translated the bible from Latin to German. One of the Catholic Churches major events is Communion. Luther “challenged one of the central sacraments of the Catholic church” (Zucker and Harris), by stating that doing communion is not required to “achieve grace with God or salvation” (Zucker and Harris).

Obviously, no one believed Luther and ignored his accusations of the Catholic church. Luther was “asked to recant his writings” (Zucker and Harris), he certainly did not so he was excommunicated for the church altogether. After Luther was excommunicated from the church, the Council of Trent was created to compromise the issues that he had claimed against the church. The Council of Trent was high officials in the church and they wanted to check and see if his accusations were correct.

They also created religious courts to punish Protestants. In the religious courts, they could punish anyone that went against the church. The council did not do anything but reaffirm everything that Luther stated was wrong. Violence is something that is not very mentioned when you hear Protestant Reformation. Many families were against each other, they thought one was doing things right and the other was doing the devils work.

They did not have bibles to back up what the pope was saying. The priest is the only person that could read the bible, so how did people know what it said? They did not, they went off what the pope said and believed him. People were given religious posts “to whoever was willing to pay the most money for them. This meant that many priests did not know much about Christianity. So, they told people many different things. Some of the things had little to do with what was written in the bible” (Protestant Reformation).

I feel like the people were forced to go there, because it was the only way they thought they would get into heaven. People were upset about what happened in the Catholic church and decided to make their own religion. We currently have “33,800 denominations as of 2001” (Denominations). Luther was not wrong in writing the “Ninety-Five Theses.” He knew that something corrupt was going on in the church and I feel like he was led to announce what was happening. He had been attending this church and had been scammed, so he wanted others to know.

Since we have so many different denominations now, if you do not like approve of what they are doing you can go to a different church. Every church is split into what they believe Christ says. They all believe the same concept, but everyone is a little different. It was very successful because no one is forced to go to a certain church and believe in whatever they think is right.

Reformation of the Catholic Church. (2021, Apr 27). Retrieved from https://papersowl.com/examples/reformation-of-the-catholic-church/