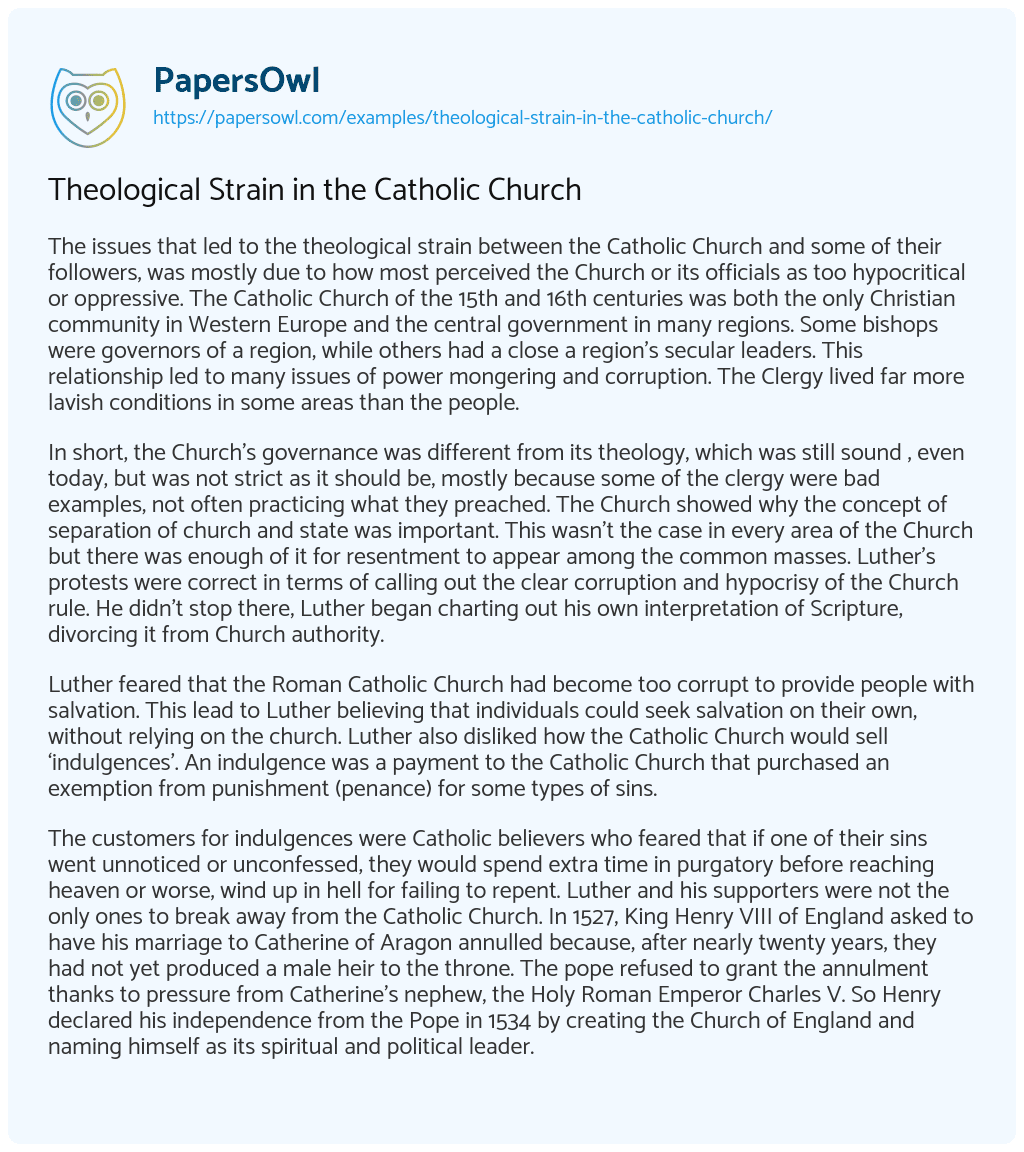 The issues that led to the theological strain between the Catholic Church and some of their followers, was mostly due to how most perceived the Church or its officials as too hypocritical or oppressive. The Catholic Church of the 15th and 16th centuries was both the only Christian community in Western Europe and the central government in many regions. Some bishops were governors of a region, while others had a close a region’s secular leaders. This relationship led to many issues of power mongering and corruption. The Clergy lived far more lavish conditions in some areas than the people.

In short, the Church’s governance was different from its theology, which was still sound , even today, but was not strict as it should be, mostly because some of the clergy were bad examples, not often practicing what they preached. The Church showed why the concept of separation of church and state was important. This wasn’t the case in every area of the Church but there was enough of it for resentment to appear among the common masses. Luther’s protests were correct in terms of calling out the clear corruption and hypocrisy of the Church rule. He didn’t stop there, Luther began charting out his own interpretation of Scripture, divorcing it from Church authority.

Luther feared that the Roman Catholic Church had become too corrupt to provide people with salvation. This lead to Luther believing that individuals could seek salvation on their own, without relying on the church. Luther also disliked how the Catholic Church would sell ‘indulgences’. An indulgence was a payment to the Catholic Church that purchased an exemption from punishment (penance) for some types of sins.

The customers for indulgences were Catholic believers who feared that if one of their sins went unnoticed or unconfessed, they would spend extra time in purgatory before reaching heaven or worse, wind up in hell for failing to repent. Luther and his supporters were not the only ones to break away from the Catholic Church. In 1527, King Henry VIII of England asked to have his marriage to Catherine of Aragon annulled because, after nearly twenty years, they had not yet produced a male heir to the throne. The pope refused to grant the annulment thanks to pressure from Catherine’s nephew, the Holy Roman Emperor Charles V. So Henry declared his independence from the Pope in 1534 by creating the Church of England and naming himself as its spiritual and political leader.

Theological Strain in the Catholic Church. (2021, Apr 03). Retrieved from https://papersowl.com/examples/theological-strain-in-the-catholic-church/