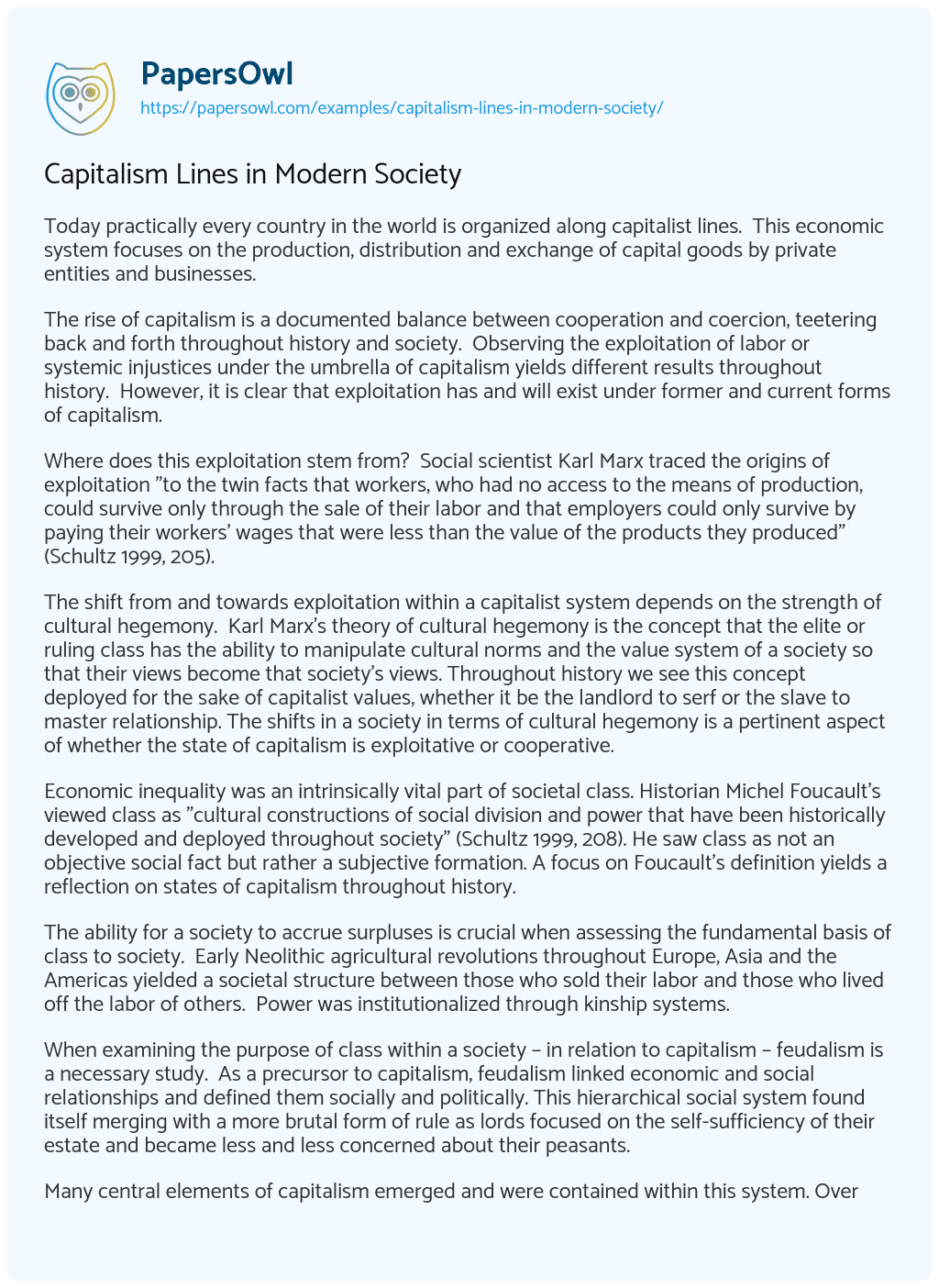 Today practically every country in the world is organized along capitalist lines.  This economic system focuses on the production, distribution and exchange of capital goods by private entities and businesses.

Where does this exploitation stem from?  Social scientist Karl Marx traced the origins of exploitation “to the twin facts that workers, who had no access to the means of production, could survive only through the sale of their labor and that employers could only survive by paying their workers’ wages that were less than the value of the products they produced” (Schultz 1999, 205).

The shift from and towards exploitation within a capitalist system depends on the strength of cultural hegemony.  Karl Marx’s theory of cultural hegemony is the concept that the elite or ruling class has the ability to manipulate cultural norms and the value system of a society so that their views become that society’s views. Throughout history we see this concept deployed for the sake of capitalist values, whether it be the landlord to serf or the slave to master relationship. The shifts in a society in terms of cultural hegemony is a pertinent aspect of whether the state of capitalism is exploitative or cooperative.

Economic inequality was an intrinsically vital part of societal class. Historian Michel Foucault’s viewed class as “cultural constructions of social division and power that have been historically developed and deployed throughout society” (Schultz 1999, 208). He saw class as not an objective social fact but rather a subjective formation. A focus on Foucault’s definition yields a reflection on states of capitalism throughout history.

The ability for a society to accrue surpluses is crucial when assessing the fundamental basis of class to society.  Early Neolithic agricultural revolutions throughout Europe, Asia and the Americas yielded a societal structure between those who sold their labor and those who lived off the labor of others.  Power was institutionalized through kinship systems.

When examining the purpose of class within a society – in relation to capitalism – feudalism is a necessary study.  As a precursor to capitalism, feudalism linked economic and social relationships and defined them socially and politically. This hierarchical social system found itself merging with a more brutal form of rule as lords focused on the self-sufficiency of their estate and became less and less concerned about their peasants.

Many central elements of capitalism emerged and were contained within this system. Over a long period of time, emerging capitalist components seeped into this system as the balance between coercion and cooperation tipped towards cooperation. This created opportunities for agricultural producers to reshape their sphere of production. As feudalism laid the foundations for mercantilism in early modern Europe, capitalism was innately natural. As the dominate social system in Europe, feudalism– with the help of economic decline – eventually gave rise to a more equal social structure that was built on the independence of serfs to do what they wanted with the land they rented from their landlords. This shift in early European society was a pivot from an economic system driven by coercion.

Medieval Europe’s flirtation with more civil affairs among classes is part of this cooperative balance in a pre-capitalist society. By 1650, the privatization of common land throughout Europe gave rise to the agricultural work wage. Elites and higher classes sought these lands not for the peasants but rather in favor of a more agrarian capitalism. Cultivation methods improved, increasing agricultural production and subsequently causing the population to rise.

The rise of the banking system in Europe also played a central role in balancing cooperation and coercion. As trade expanded, those in power called on the services of the banks in an attempt to slice out a portion of cooperate and private assets for themselves.  For the lower class, they frequently became indebted to these capitalists. Sometimes the people in power used their political clout to relieve debt. This regulation of debt was crucial to a society’s prosperity. Throughout the world, this regulation looked different in varying countries. By 1689, England and the Dutch Republic had succeeded in consolidating public debt.

Throughout the mid to late 18th century, European merchant and financial capitalism flourished without the restructuring of production processes that came with industrialization. Capitalism however did not leave the sphere of production untouched but rather impacted specific industries such as the plantation economy. This triumph of early modern capitalism in Europe led to a massive increase in unpaid labor. Cooperate focus on unskilled labor and homogeneous staple commodities allowed for the profitable success of the plantation economy until the 19th century.

The development of the plantation economy was massively renovated and expanded due to the Transatlantic Slave Trade.  At this point in history, capitalism was at its most monstrous and coercive than ever before. “In light of the scarcity and insufficient suitability of native workers, African, European and American slave traders sold between 11 and 12 million Africans, both men and women, to America, from the sixteenth through the nineteenth century. Of these, the West Indies took 48 per cent, Brazil 38 percent, and the southern regions of what later became the United States of America barely 5 percent” (Schultz 1999, 67).

Slavery was a fantastic way to supplement the labor demand of the plantation business. It reshaped the sphere of production through demand and investment. This extreme relationship between property and owner showed the coercive nature of the labor market in early capitalist America. Resistance continually manifested itself throughout this period of history however inhumane precautions were taken to avoid these resistances. Slavery thrived under a capitalist system focused on the production and distribution of commodities. Bans on slavery came not from an inferior economic form but rather from political pressures.

Between 1833 and 1888, as a result from the religious-humanitarian commitment, countries like Great Britain and Brazil outlawed slavery.  Again, the scale was tipped from a coercive system to a more egalitarian form of capitalism.  It’s hard to rationalize the development of large-scale capitalism without its connections to slavery.  Moreover, this piece of history shows that “capitalism of its own accord contains little in the way of resistance against inhumane practices, but that it is compatible with such resistance when subjected to legal-political restrictions and guidance” (Kocka 2016, 70).

Examining the current state of capitalism from a Marxist perspective is central to the question of whether or not capitalism resides in a more or less coercive state.  Throughout history, the coercive nature of capitalism has fluctuated.  The wealthy squeeze lower classes of society until a breaking point.

The Marxist notion that a capitalist society is “forced” to sell their labor or starve – and in the process purchase services and goods from cooperate entities – largely bodes true for present day American capitalism.  While this sentiment has negative implications about the current state of cultural hegemony and power in America, history has proven that there will always be a teetering balance between cooperation and coercion.  Author Yves Smith sheds light on the specificities of this balance in his article The Coercive Power of Capitalism.  “If you have a system that requires that people sell their labor as a condition of survival, yet fails to provide enough opportunities to sell labor to go around, you have conditions for revolt” (Smith 2013).

He goes on to conclude that desperation – not charity – is the root of the welfare state.  With these ideas in mind, it is easy to reflect on historical trends of capitalism that encompass this idea.  The feudal landlords who, due economic pressure, had to create agreements about living conditions with their serfs.

The political pressure in Brazil and Great Britain that ultimately caused the banning of the use of slavery in those countries.  History has always been a balance between a minority of wealth and a majority of lower economic status.  Capitalism’s deeply disturbing history sheds light on the focuses of capitalism.  This system is compatible with the exploitation of work yet, paired with the right governance, capitalism allows its consumers to thrive independently and simultaneously.