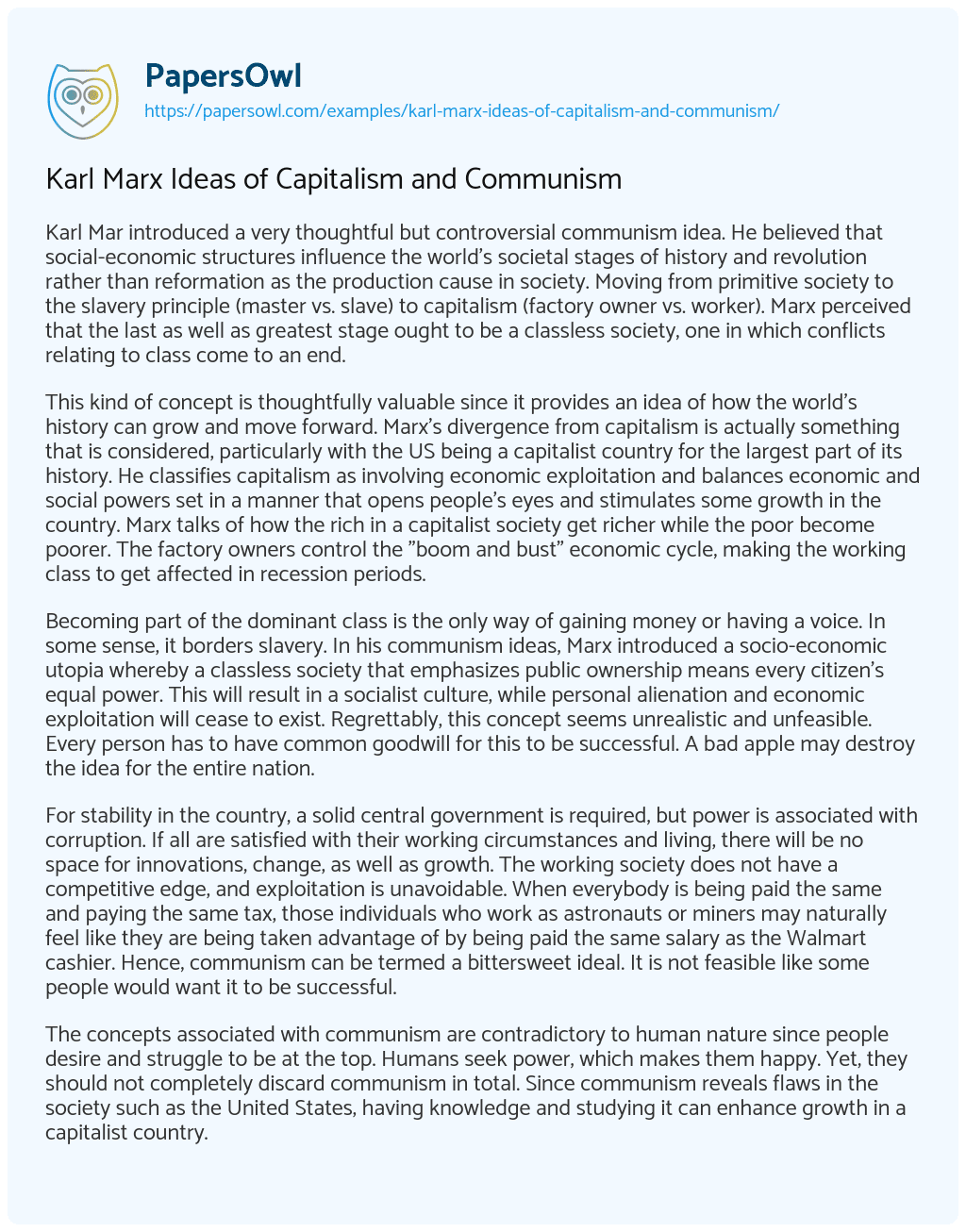 Karl Marx brought to the world a very thoughtful and controversial ideal with the concept of Communism. Marx believed that socio-economic structures shape our Earth’s societal phases of history and that revolution, instead of reformation is the cause of production in a society. Going from a Primitive Society to the essence of slavery (slave vs. master) All the way to Capitalism (Factory Worker vs Factory Owner). He believed that the last and greatest phase should be a classless society. a public society in which all class conflicts will be ended.

This set of ideas is philosophically valuable because it gives us a concept of how our history is capable of growing and moving forward. Marx’s disagreement with Capitalism is really something to look at, especially with Americans being, well for the most part, a capitalist country. The way he categorizes capitalism as economic exploitation and and having a way out of balance social and economic set of powers can open a lot of eyes and can spur some growth within a country. He talks about in a capitalist society, the rich get richer and the poor gets poorer. With the factory owners in control of the ‘boom and bust’ cycles, the working class only gets affected in the periods of recession.

The only way to have a voice, or even gain money, is to be in the dominant class. It is like borderline slavery in a sense. With Communism, Marx brought about a socio-economic utopia whereas a classless society with public ownership meant equal power to every citizen. A socialist culture will be brought about and economic exploitation and personal alienation will come to an end. Unfortunately, this idea is unrealistic and impractical. In order for this to work, everyone in the society has to be unanimous in good will. One bad apple can ruin it for a whole nation.

For the country to be stable, a strong central government is needed. and with power comes corruption. If everyone is so content with their living and working situations, there will be NO room for change, growth, and innovations. There is no competitive edge in the working society. And Exploitation is inevitable. With everyone being paid the same and taxed the same. It will be natural for those who work as a Miner or Astronaut to feel as if there are getting taken advantage of when they get the same pay as a cashier at Walmart. Communism is a bittersweet ideal. As much as we would want it to work… It is just not practical.

The ideas that come within Communism contradicts human nature in the sense that we LOVE fighting to get to the top. Humans want power it makes them feel good. But must not completely reject communism as a whole. With Communism bringing forth the flaws in our society as americans, knowing and studying this can promote growth in our Capitalist country.

The Emergence of Communism

Marxism is the Arrangement of Communism