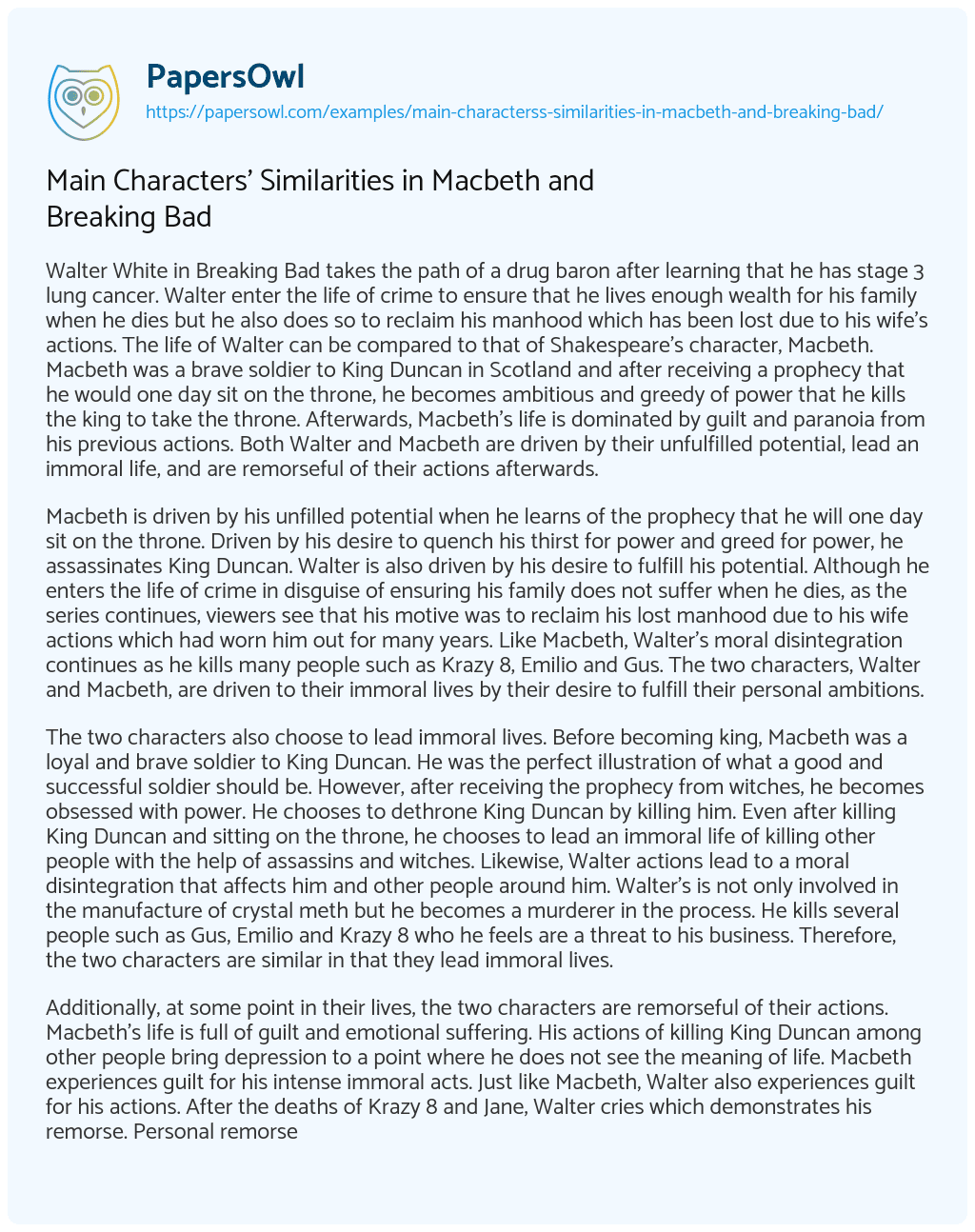 Walter White in Breaking Bad takes the path of a drug baron after learning that he has stage 3 lung cancer. Walter enter the life of crime to ensure that he lives enough wealth for his family when he dies but he also does so to reclaim his manhood which has been lost due to his wife’s actions. The life of Walter can be compared to that of Shakespeare’s character, Macbeth. Macbeth was a brave soldier to King Duncan in Scotland and after receiving a prophecy that he would one day sit on the throne, he becomes ambitious and greedy of power that he kills the king to take the throne. Afterwards, Macbeth’s life is dominated by guilt and paranoia from his previous actions. Both Walter and Macbeth are driven by their unfulfilled potential, lead an immoral life, and are remorseful of their actions afterwards.

Macbeth is driven by his unfilled potential when he learns of the prophecy that he will one day sit on the throne. Driven by his desire to quench his thirst for power and greed for power, he assassinates King Duncan. Walter is also driven by his desire to fulfill his potential. Although he enters the life of crime in disguise of ensuring his family does not suffer when he dies, as the series continues, viewers see that his motive was to reclaim his lost manhood due to his wife actions which had worn him out for many years. Like Macbeth, Walter’s moral disintegration continues as he kills many people such as Krazy 8, Emilio and Gus. The two characters, Walter and Macbeth, are driven to their immoral lives by their desire to fulfill their personal ambitions.

The two characters also choose to lead immoral lives. Before becoming king, Macbeth was a loyal and brave soldier to King Duncan. He was the perfect illustration of what a good and successful soldier should be. However, after receiving the prophecy from witches, he becomes obsessed with power. He chooses to dethrone King Duncan by killing him. Even after killing King Duncan and sitting on the throne, he chooses to lead an immoral life of killing other people with the help of assassins and witches. Likewise, Walter actions lead to a moral disintegration that affects him and other people around him. Walter’s is not only involved in the manufacture of crystal meth but he becomes a murderer in the process. He kills several people such as Gus, Emilio and Krazy 8 who he feels are a threat to his business. Therefore, the two characters are similar in that they lead immoral lives.

Additionally, at some point in their lives, the two characters are remorseful of their actions. Macbeth’s life is full of guilt and emotional suffering. His actions of killing King Duncan among other people bring depression to a point where he does not see the meaning of life. Macbeth experiences guilt for his intense immoral acts. Just like Macbeth, Walter also experiences guilt for his actions. After the deaths of Krazy 8 and Jane, Walter cries which demonstrates his remorse. Personal remorse is also evident after the death of Hank and Steve Gomez. Although Walter continues with his actions, he feels guilty of his actions and how it affects people around him. Both Macbeth and Walter at some point feel they have lived too long which demonstrates how remorseful they are for the actions.

Although Macbeth and Breaking Bad were written centuries apart, the main characters demonstrate similarities in the desire to fulfill their potential, moral disintegration and remorse for their actions. Walter fits into Shakespeare’s tragic character as his desire to reclaim his lost manhood can be identified as his Hamartia. Walter grows deep into crime and murder that it is hard for him to go back to normalcy. At some points, he is remorseful of his actions and this is a major element of Shakespeare’s tragic characters.