Lie in the Great Gatsby and the Ways we Lie 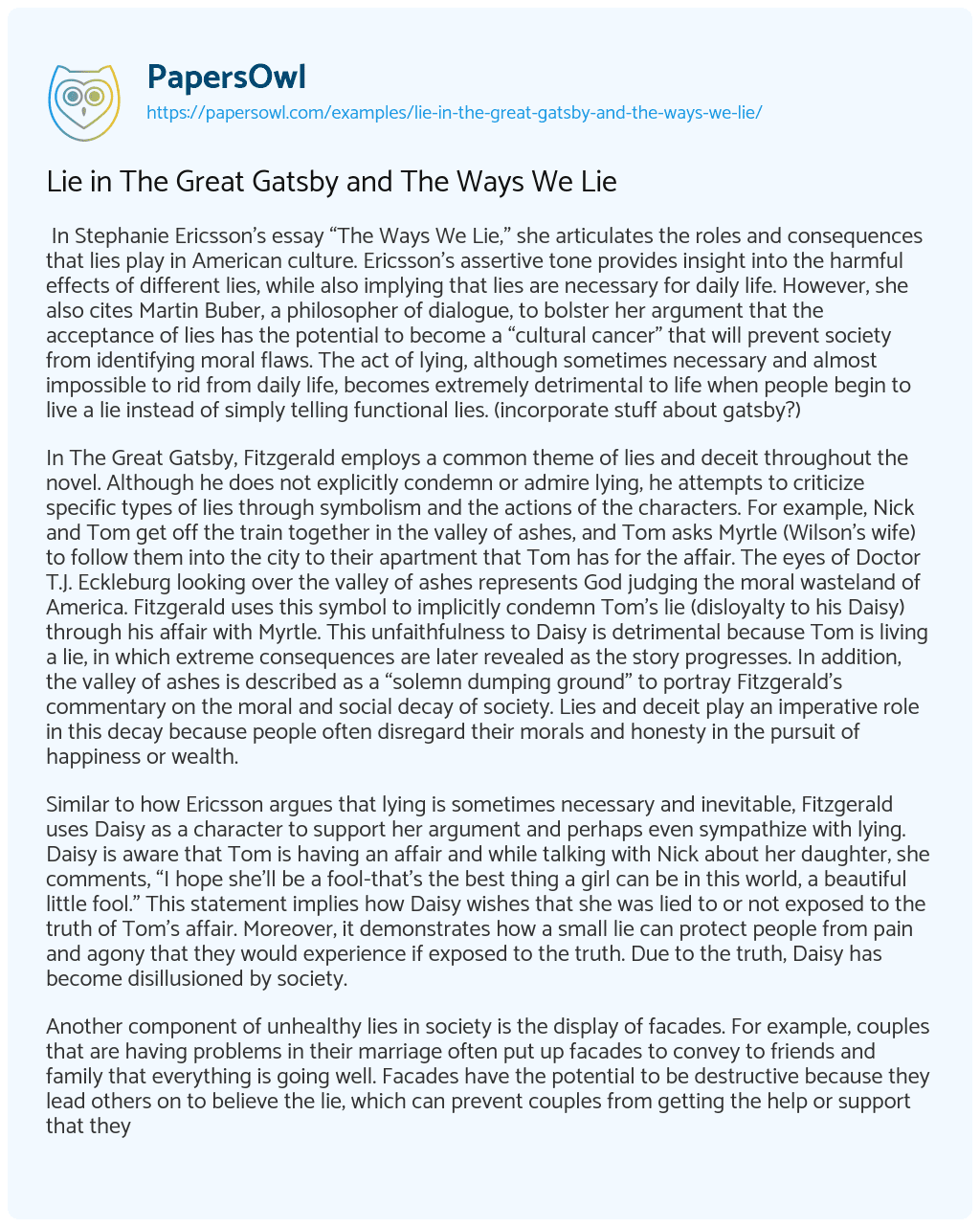 In Stephanie Ericsson’s essay “The Ways We Lie,” she articulates the roles and consequences that lies play in American culture. Ericsson’s assertive tone provides insight into the harmful effects of different lies, while also implying that lies are necessary for daily life. However, she also cites Martin Buber, a philosopher of dialogue, to bolster her argument that the acceptance of lies has the potential to become a “cultural cancer” that will prevent society from identifying moral flaws. The act of lying, although sometimes necessary and almost impossible to rid from daily life, becomes extremely detrimental to life when people begin to live a lie instead of simply telling functional lies. (incorporate stuff about gatsby?)

In The Great Gatsby, Fitzgerald employs a common theme of lies and deceit throughout the novel. Although he does not explicitly condemn or admire lying, he attempts to criticize specific types of lies through symbolism and the actions of the characters. For example, Nick and Tom get off the train together in the valley of ashes, and Tom asks Myrtle (Wilson’s wife) to follow them into the city to their apartment that Tom has for the affair. The eyes of Doctor T.J. Eckleburg looking over the valley of ashes represents God judging the moral wasteland of America. Fitzgerald uses this symbol to implicitly condemn Tom’s lie (disloyalty to his Daisy) through his affair with Myrtle. This unfaithfulness to Daisy is detrimental because Tom is living a lie, in which extreme consequences are later revealed as the story progresses. In addition, the valley of ashes is described as a “solemn dumping ground” to portray Fitzgerald’s commentary on the moral and social decay of society. Lies and deceit play an imperative role in this decay because people often disregard their morals and honesty in the pursuit of happiness or wealth.

Similar to how Ericsson argues that lying is sometimes necessary and inevitable, Fitzgerald uses Daisy as a character to support her argument and perhaps even sympathize with lying. Daisy is aware that Tom is having an affair and while talking with Nick about her daughter, she comments, “I hope she’ll be a fool-that’s the best thing a girl can be in this world, a beautiful little fool.” This statement implies how Daisy wishes that she was lied to or not exposed to the truth of Tom’s affair. Moreover, it demonstrates how a small lie can protect people from pain and agony that they would experience if exposed to the truth. Due to the truth, Daisy has become disillusioned by society.

Another component of unhealthy lies in society is the display of facades. For example, couples that are having problems in their marriage often put up facades to convey to friends and family that everything is going well. Facades have the potential to be destructive because they lead others on to believe the lie, which can prevent couples from getting the help or support that they need from friends and family. The creation of illusions through facades that persist consistently pull the liars into a dangerous life of deception.

In conclusion, lies become destructive when a person is living a lie; however, functional lies are often unavoidable because they can protect people from pain and ameliorate the machinery of daily life. Society needs to be able to distinguish when the acceptance of lies becomes excessive and hinders people’s ability to comprehend the “moral garbage” that surrounds communities. Some opponents may argue that all lies are unacceptable and harmful. On the other hand, truth can frequently cause disillusionment and pain. Therefore, there is an extent to which lying can be beneficial to society.

Lie in The Great Gatsby and The Ways We Lie. (2021, Mar 26). Retrieved from https://papersowl.com/examples/lie-in-the-great-gatsby-and-the-ways-we-lie/

Who is the Worst Character in the Great Gatsby

Money and Parties at the Great Gatsby