The War System of Colombia Capitalism 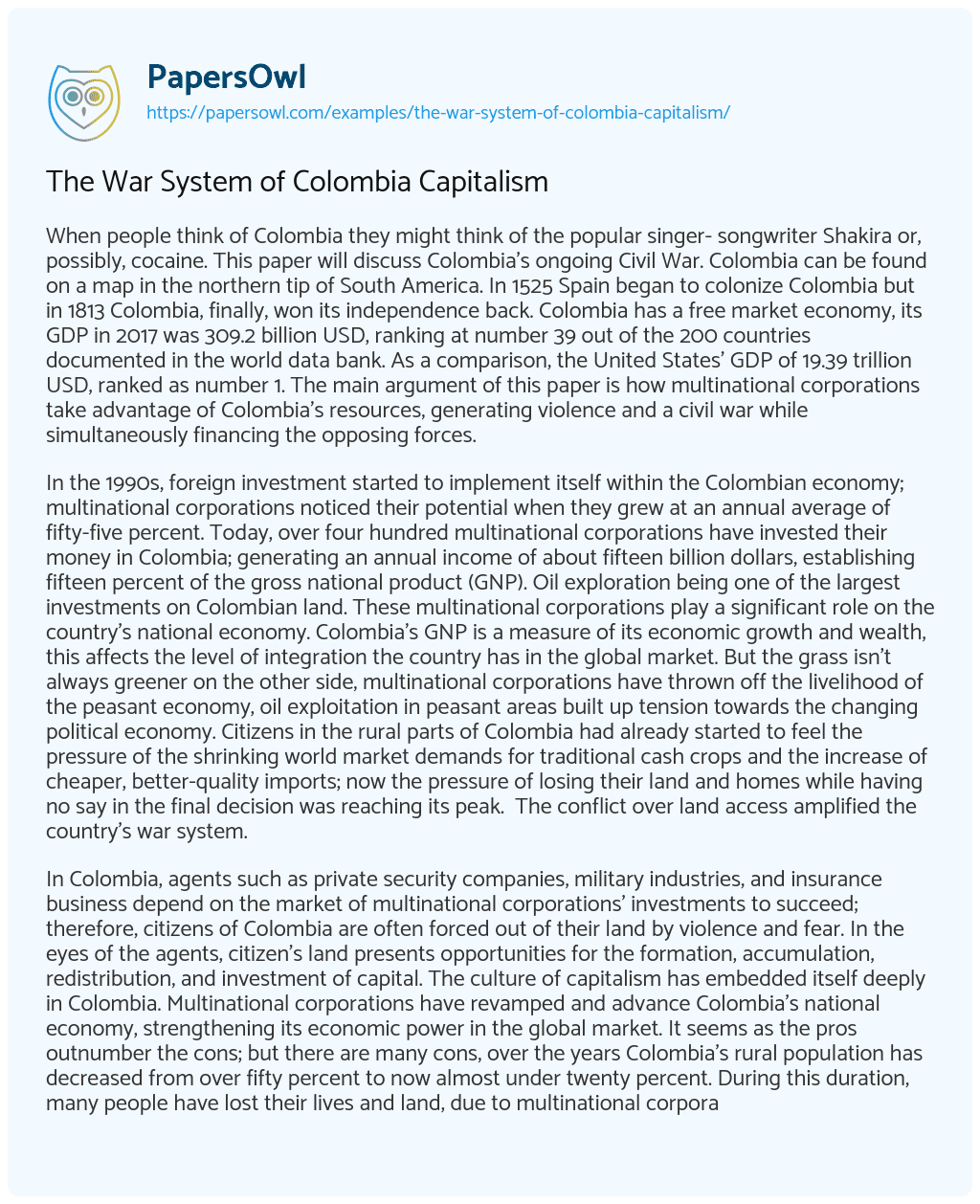 When people think of Colombia they might think of the popular singer- songwriter Shakira or, possibly, cocaine. This paper will discuss Colombia’s ongoing Civil War. Colombia can be found on a map in the northern tip of South America. In 1525 Spain began to colonize Colombia but in 1813 Colombia, finally, won its independence back. Colombia has a free market economy, its GDP in 2017 was 309.2 billion USD, ranking at number 39 out of the 200 countries documented in the world data bank. As a comparison, the United States’ GDP of 19.39 trillion USD, ranked as number 1. The main argument of this paper is how multinational corporations take advantage of Colombia’s resources, generating violence and a civil war while simultaneously financing the opposing forces.

In the 1990s, foreign investment started to implement itself within the Colombian economy; multinational corporations noticed their potential when they grew at an annual average of fifty-five percent. Today, over four hundred multinational corporations have invested their money in Colombia; generating an annual income of about fifteen billion dollars, establishing fifteen percent of the gross national product (GNP). Oil exploration being one of the largest investments on Colombian land. These multinational corporations play a significant role on the country’s national economy. Colombia’s GNP is a measure of its economic growth and wealth, this affects the level of integration the country has in the global market. But the grass isn’t always greener on the other side, multinational corporations have thrown off the livelihood of the peasant economy, oil exploitation in peasant areas built up tension towards the changing political economy. Citizens in the rural parts of Colombia had already started to feel the pressure of the shrinking world market demands for traditional cash crops and the increase of cheaper, better-quality imports; now the pressure of losing their land and homes while having no say in the final decision was reaching its peak.  The conflict over land access amplified the country’s war system.

In Colombia, agents such as private security companies, military industries, and insurance business depend on the market of multinational corporations’ investments to succeed; therefore, citizens of Colombia are often forced out of their land by violence and fear. In the eyes of the agents, citizen’s land presents opportunities for the formation, accumulation, redistribution, and investment of capital. The culture of capitalism has embedded itself deeply in Colombia. Multinational corporations have revamped and advance Colombia’s national economy, strengthening its economic power in the global market. It seems as the pros outnumber the cons; but there are many cons, over the years Colombia’s rural population has decreased from over fifty percent to now almost under twenty percent. During this duration, many people have lost their lives and land, due to multinational corporations which indirectly have a strong grip on business, the military, and private security companies. These agents are willing to put money over their own citizens at any cost for capitalism.

Another profitable investment on the Colombian land is gold. Simiti, a town positioned in south Bolivia, yields forty-two percent of Colombia’s gold. The mines located in Simiti are owned by the Hiquera-Palacios family, over the past thirty years 35,000 local miners have worked in the mine industry. On April 25th, 1997 paramilitaries populated the mines declaring their intention to “cleanse the area and hand it over to multinational corporations because they will provide jobs and improve the region”. By 1998, over 10,000 locals were forced out of south Bolivia. The miners and locals were left ravaged and in ruins, knowing that multinational corporations were behind this operation; leaving thousands of people without a job and homeless. Since April 25th, 1997 paramilitaries have executed 259 people, burned 689 homes to the ground, and terminated 7 villages throughout south Bolivia. The gold mine matter in south Bolivia is only one of the thousand crimes against the Colombian people that have taken place since multinational corporations have started to invest on Colombian land.

Colombia’s democracy was to be reinforced through economic and military assistance. So, in 1999 the United States passed into law Plan Colombia. Plan Colombia was established to promote peace, combat narco-terrorism and revive the economy. Colombia became the third largest beneficiary of United States military aid. By 2002, Congress started to raise concerns over the United States funds fueling human rights violations in Colombia. Conditions were set in order for Colombia to continue receiving its aid from the United States. Colombia’s military was required to break ties with paramilitary groups. In addition, only 75% of the funds would be available for Colombia to obtain. In order for Colombia to receive the rest of the United States’ aid, the United States state Department must be provided with a certification that the human rights situation is improving. Things only got worse, in May 2003, the Betoyes Guahibo Indigenous Reserve was attacked as part of a precise and widespread plan to coerce the people inhabiting the Reserve. The paramilitaries raped young girls and women, cut open, and shot the indigenous people of the Reserve. Few escaped and fled to nearby towns spreading the report to international media. As a result, 25% of the United States aid was suspended.

The Betoyes Guahibo Indigenous Reserve, one taken over, was to be used as land for investment by multinational corporations. One of Plan Colombia’s main goal was to reduce the number of drugs that would find their way across the United States border. Colombia’s war on drugs has declined since the early 2000s. Cultivation of the Coca crop, used in the extraction of cocaine, dropped rapidly from the year 2000 inhibiting 160,000 hectares to 48,000 hectares in 2008. The US Congress was morally and ethically obligated to reduce funding once the true colors of crimes against humanity in Colombia rose to light; but this still this didn’t affect the power that multinational corporations had over Colombian resources.  It is hard for a plan like this to succeed when Colombia itself has already been robbed of all of its resources. Any resources left are taken over by force to be made a profit off of. As long as the government of Colombia and its agents are profiting from these multinational corporation, the people will never have a say or be protected by its government.

My final thoughts over my findings are distraught. I do believe that we are at a point in the world and life where advancements of technology and capitalism is needed. Both of these factors prove to improve our economy and straighten our power in the global market. But what is being done to Colombia, and most likely to other countries as well, is not ethical. We should never turn on each other because of money and power. The nature of capitalism brings growth but also greed and selfishness. Capitalism should not have so much power over the agents of Colombia to the point where ruthlessly killing and mistreating your own people is an option.

The War System of Colombia Capitalism. (2019, Aug 15). Retrieved from https://papersowl.com/examples/the-war-system-of-colombia-capitalism/

The Republic of Colombia