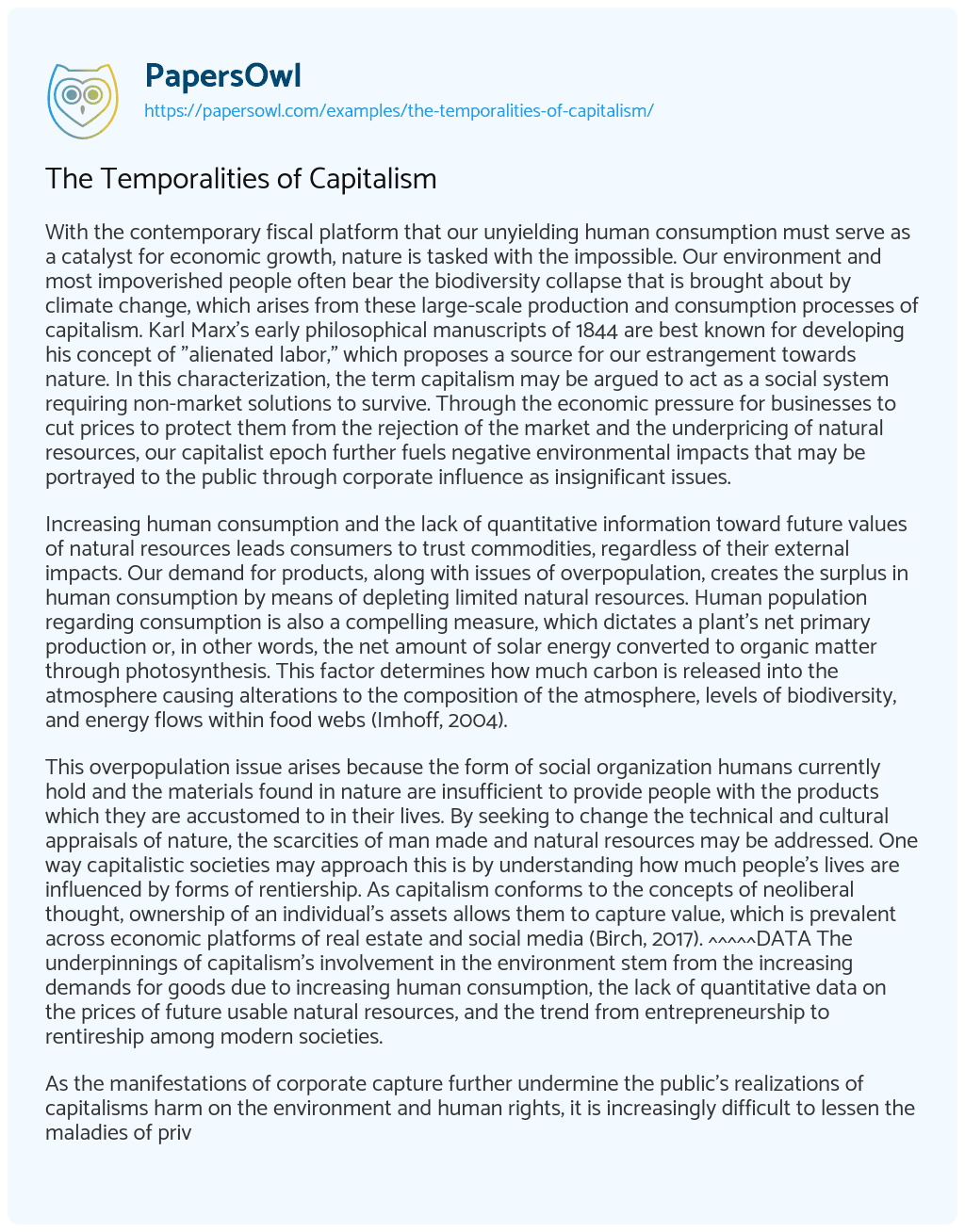 With the contemporary fiscal platform that our unyielding human consumption must serve as a catalyst for economic growth, nature is tasked with the impossible. Our environment and most impoverished people often bear the biodiversity collapse that is brought about by climate change, which arises from these large-scale production and consumption processes of capitalism. Karl Marx’s early philosophical manuscripts of 1844 are best known for developing his concept of “alienated labor,” which proposes a source for our estrangement towards nature. In this characterization, the term capitalism may be argued to act as a social system requiring non-market solutions to survive. Through the economic pressure for businesses to cut prices to protect them from the rejection of the market and the underpricing of natural resources, our capitalist epoch further fuels negative environmental impacts that may be portrayed to the public through corporate influence as insignificant issues.

Increasing human consumption and the lack of quantitative information toward future values of natural resources leads consumers to trust commodities, regardless of their external impacts. Our demand for products, along with issues of overpopulation, creates the surplus in human consumption by means of depleting limited natural resources. Human population regarding consumption is also a compelling measure, which dictates a plant’s net primary production or, in other words, the net amount of solar energy converted to organic matter through photosynthesis. This factor determines how much carbon is released into the atmosphere causing alterations to the composition of the atmosphere, levels of biodiversity, and energy flows within food webs (Imhoff, 2004).

This overpopulation issue arises because the form of social organization humans currently hold and the materials found in nature are insufficient to provide people with the products which they are accustomed to in their lives. By seeking to change the technical and cultural appraisals of nature, the scarcities of man made and natural resources may be addressed. One way capitalistic societies may approach this is by understanding how much people’s lives are influenced by forms of rentiership. As capitalism conforms to the concepts of neoliberal thought, ownership of an individual’s assets allows them to capture value, which is prevalent across economic platforms of real estate and social media (Birch, 2017). ^^^^^DATA The underpinnings of capitalism’s involvement in the environment stem from the increasing demands for goods due to increasing human consumption, the lack of quantitative data on the prices of future usable natural resources, and the trend from entrepreneurship to rentireship among modern societies.

As the manifestations of corporate capture further undermine the public’s realizations of capitalisms harm on the environment and human rights, it is increasingly difficult to lessen the maladies of private profit maximization. Influential business firms negate the seriousness of environmental issues because the industries that yield the greatest environmental impacts are those in which yield their profits. Therefore, corporations and business firms have an obligation to lessen public outrage for the impacts on nature in order to protect their continuous profitable interests.

The Temporalities of Capitalism. (2020, Mar 18). Retrieved from https://papersowl.com/examples/the-temporalities-of-capitalism/

American Capitalism and the American Environment