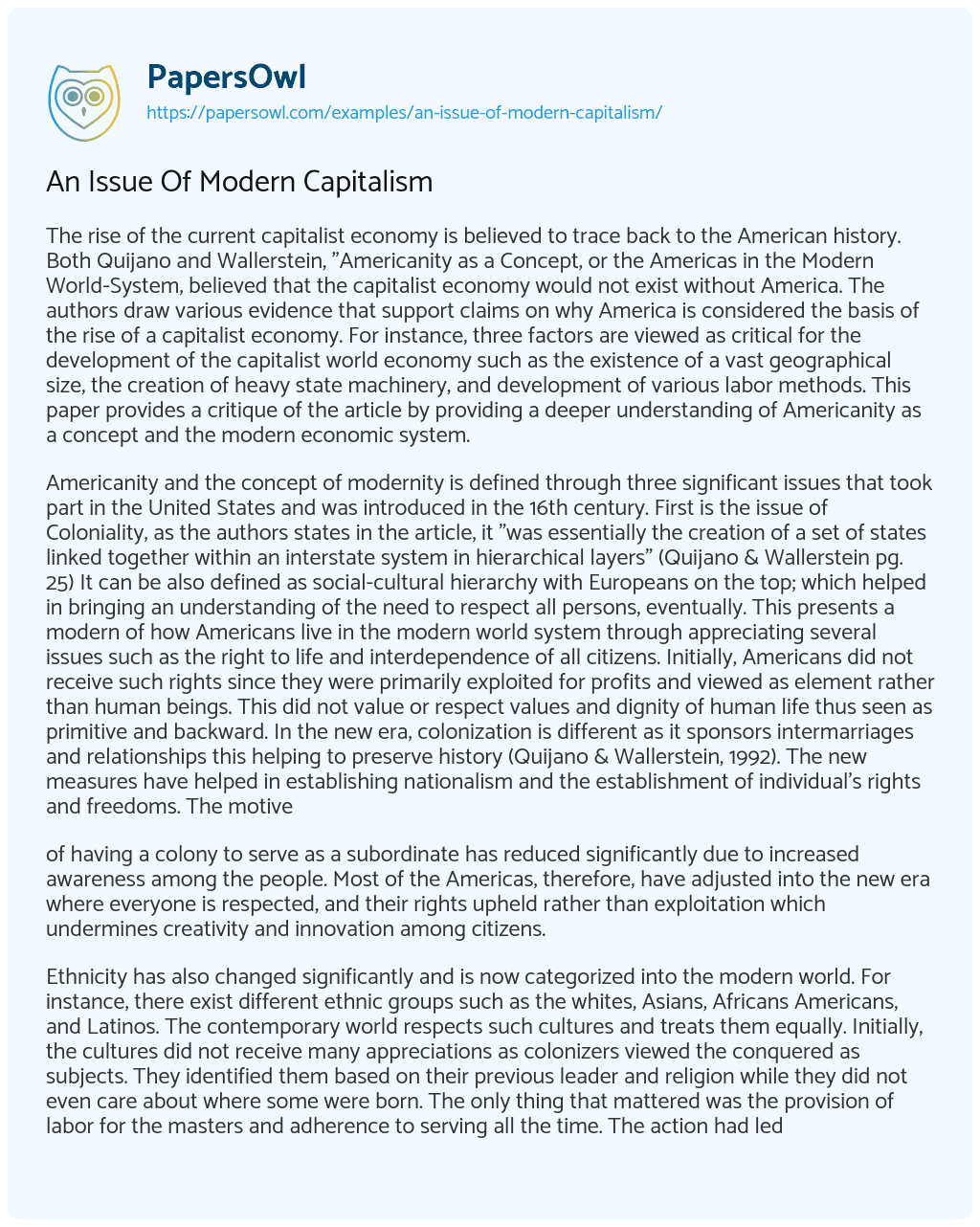 The rise of the current capitalist economy is believed to trace back to the American history. Both Quijano and Wallerstein, “Americanity as a Concept, or the Americas in the Modern World-System, believed that the capitalist economy would not exist without America. The authors draw various evidence that support claims on why America is considered the basis of the rise of a capitalist economy. For instance, three factors are viewed as critical for the development of the capitalist world economy such as the existence of a vast geographical size, the creation of heavy state machinery, and development of various labor methods. This paper provides a critique of the article by providing a deeper understanding of Americanity as a concept and the modern economic system.

Americanity and the concept of modernity is defined through three significant issues that took part in the United States and was introduced in the 16th century. First is the issue of Coloniality, as the authors states in the article, it “was essentially the creation of a set of states linked together within an interstate system in hierarchical layers” (Quijano & Wallerstein pg. 25) It can be also defined as social-cultural hierarchy with Europeans on the top; which helped in bringing an understanding of the need to respect all persons, eventually. This presents a modern of how Americans live in the modern world system through appreciating several issues such as the right to life and interdependence of all citizens. Initially, Americans did not receive such rights since they were primarily exploited for profits and viewed as element rather than human beings. This did not value or respect values and dignity of human life thus seen as primitive and backward. In the new era, colonization is different as it sponsors intermarriages and relationships this helping to preserve history (Quijano & Wallerstein, 1992). The new measures have helped in establishing nationalism and the establishment of individual’s rights and freedoms. The motive

of having a colony to serve as a subordinate has reduced significantly due to increased awareness among the people. Most of the Americas, therefore, have adjusted into the new era where everyone is respected, and their rights upheld rather than exploitation which undermines creativity and innovation among citizens.

Ethnicity has also changed significantly and is now categorized into the modern world. For instance, there exist different ethnic groups such as the whites, Asians, Africans Americans, and Latinos. The contemporary world respects such cultures and treats them equally. Initially, the cultures did not receive many appreciations as colonizers viewed the conquered as subjects. They identified them based on their previous leader and religion while they did not even care about where some were born. The only thing that mattered was the provision of labor for the masters and adherence to serving all the time. The action had led to the erosion of the moral fabric that held communities and cultures together. In my view, this was not modernity, but a capitalist attitude based on exploitation. However, the modern world and capitalist economy are based on appreciating the rights of the workers and working to ensure the conditions are improved on a regular basis. For instance, ethnicity is encouraged as it helps to provide diversity in the working place and cohesion among people within an organization (Quijano & Wallerstein, 1992). The modern world also views ethnicity as a cultural heritage that should be celebrated by all and not victimization. Therefore, it differs from the authors’ assertion on modernity and capitalist economy in the United States but rather Americas in the modern world.

Americanity concept also included racism which entailed the enslavement of people from a particular race. Just like the modern capitalism, racism classed social institution were based on

the aristocratic differences. The peasants were not recognized among the Americas. The case is different in the contemporary economy since the poor are accepted and have to work for the rich and compensated through payment (Quijano & Wallerstein, 1992). According to the Americanity concept people moved from the lower class to the upper class depending on their races while the inferior races were demoted to the lower class. However, the modern capitalist economy also involves movement from the lower class to the upper level depending on how an individual utilizes the factors of production. The race is not applicable in the modern world. Therefore, it negates the fact that there would be no capitalism if there was no America since today people grow their wealth through understanding the fundamentals of the economy. Individuals with little understanding of the economic fundamentals move to the lower class. Moreover, other factors rather than race such as technology, and governance issues are attributed to the economic growth.

The concept of newness is a perfect example to explain the growth of capitalism. According to the author, the growth of capitalism required new inventions and new products thus leading to exploitation of the market. What this has is still applicable in the present world whereby the growth of a capitalist economy is not attributed to America’s traditions (Quijano & Wallerstein, 1992). The discovery of new products and methods of production has led to increased market exploitation as people try to improve their wealth and overall contribution to the economy. This has led to the development of different structures which do not reflect America traditions. The government actions also play a crucial role in promoting the economy through various policies. Moreover, integration has also increased rapidly over the years, and this has encouraged the rise of the capitalist economy in the modern world.

In conclusion, the modern capitalist economy is attributable to present innovations and has increased integration rather than the Americanity concept. America has had to adjust to the contemporary world whereby everyone is valued, and rights observed during wealth generation. The current economy is now based on mutual understanding and developing the fundamentals that promote market exploitation in general. It is an interesting article that exposes a reader to think critically of the world’s history on capitalism and the structure hierarchy system that defines human beings into class systems… which has significantly shaped our society to this day.

An Issue Of Modern Capitalism. (2020, Mar 11). Retrieved from https://papersowl.com/examples/an-issue-of-modern-capitalism/