Capitalism is an Unparalleled Economic and Political System 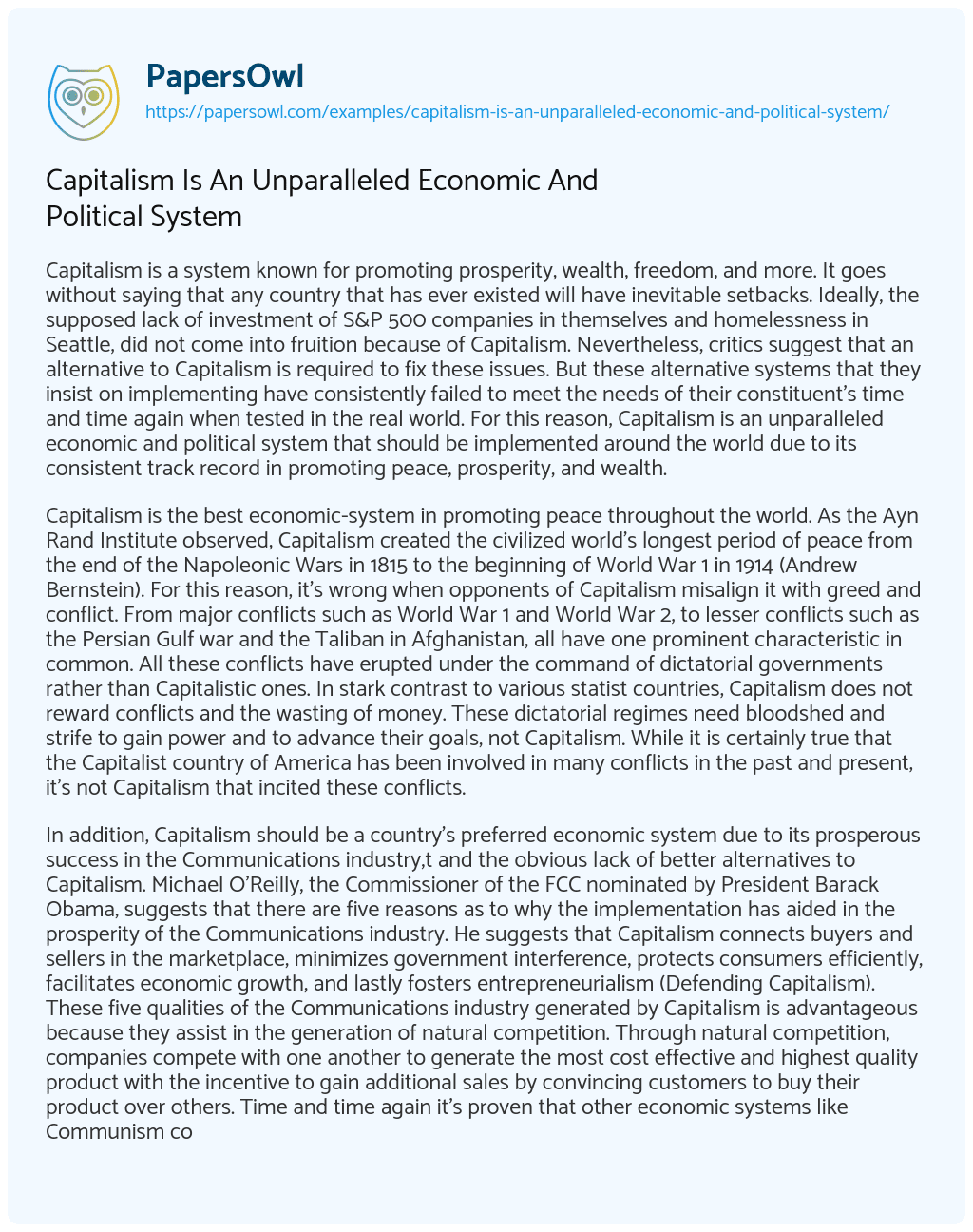 Capitalism is a system known for promoting prosperity, wealth, freedom, and more. It goes without saying that any country that has ever existed will have inevitable setbacks. Ideally, the supposed lack of investment of S&P 500 companies in themselves and homelessness in Seattle, did not come into fruition because of Capitalism. Nevertheless, critics suggest that an alternative to Capitalism is required to fix these issues. But these alternative systems that they insist on implementing have consistently failed to meet the needs of their constituent’s time and time again when tested in the real world. For this reason, Capitalism is an unparalleled economic and political system that should be implemented around the world due to its consistent track record in promoting peace, prosperity, and wealth.

Capitalism is the best economic-system in promoting peace throughout the world. As the Ayn Rand Institute observed, Capitalism created the civilized world’s longest period of peace from the end of the Napoleonic Wars in 1815 to the beginning of World War 1 in 1914 (Andrew Bernstein). For this reason, it’s wrong when opponents of Capitalism misalign it with greed and conflict. From major conflicts such as World War 1 and World War 2, to lesser conflicts such as the Persian Gulf war and the Taliban in Afghanistan, all have one prominent characteristic in common. All these conflicts have erupted under the command of dictatorial governments rather than Capitalistic ones. In stark contrast to various statist countries, Capitalism does not reward conflicts and the wasting of money. These dictatorial regimes need bloodshed and strife to gain power and to advance their goals, not Capitalism. While it is certainly true that the Capitalist country of America has been involved in many conflicts in the past and present, it’s not Capitalism that incited these conflicts.

In addition, Capitalism should be a country’s preferred economic system due to its prosperous success in the Communications industry,t and the obvious lack of better alternatives to Capitalism. Michael O’Reilly, the Commissioner of the FCC nominated by President Barack Obama, suggests that there are five reasons as to why the implementation has aided in the prosperity of the Communications industry. He suggests that Capitalism connects buyers and sellers in the marketplace, minimizes government interference, protects consumers efficiently, facilitates economic growth, and lastly fosters entrepreneurialism (Defending Capitalism). These five qualities of the Communications industry generated by Capitalism is advantageous because they assist in the generation of natural competition. Through natural competition, companies compete with one another to generate the most cost effective and highest quality product with the incentive to gain additional sales by convincing customers to buy their product over others. Time and time again it’s proven that other economic systems like Communism couldn’t create true competition like Capitalism because of its failure to create innovation and incentives.

Rather than replacing capitalism with another system like socialism, John Ikerd, a Professor Emeritus of the University of Missouri and John Isbister, the author of Capitalism and Justice: Envisioning Social and Economic Fairness both suggest that the current implementation of Capitalism should be improved upon rather than be replaced. Ikerd believes no other economic system can rival the efficiency of Capitalism because it doesn’t get violently rejected by its own people. The inhabitants of a Capitalist country don’t fully reject Capitalism because it doesn’t deprive anyone of their basic social rights or violate any moral imperative such as ceasing the means of production and redistributing wealth like socialism and communism (John Ikerd). He also mentions that it’s undeniable that Capitalism has its flaws. But the reasoning implies that Capitalism shouldn’t be replaced but improved upon. Even if one were to find justifiable fault in a capitalist system, there are simply no just or reasonable alternatives to Capitalism that exist.  It’s clear that Capitalism can lack justice from time to time, but the reasoning of critics decrying and advocating for the replacement of capitalism due to its failure to guarantee freedom or equal treatment is a foolish. There are two separate reasons as to why there is no point in seeking alternatives to Capitalism. The first reason is that alternatives to Capitalism have been proven to be less just and moral as seen by the bloody conflicts of the twentieth century. And the second reason is that Capitalism is all that’s left; Capitalism has destroyed feudal, tribal, communal, and imperial systems (John Isbister). To put it quite simply, all alternatives to capitalism have simply been eliminated by Capitalism and other alternatives that remain are simply insufficient at meeting the needs of its people.

Critics like Andy Freeman are correct in stating that Seattle is not doing so well even with the decision of the city of invest $5.3 Million dollars into the homelessness crisis of the city (Is Capitalism). He suggests that Municipal Zoning laws and state laws are preventing the construction of low-cost and transitional housing to help these homeless individuals. Freeman then uses these laws and this failure of investment as proof that these laws are in place to serve the interests of the rich and that these capitalist-bureaucratic obstacles cannot solve the homelessness situation of Seattle even if it wanted to. As a solution, Freeman calls for more government intervention and to tax the rich further as a solution to the problem. Detracting from this Seattle dilemma, Theodore Kinni a contributor to the Stanford School of Business discusses various Fault Lines in Capitalism. A study from economist William Lazonick shows that Companies from 2003 to 2012 spend 54% of their earnings buying back their stock and 37% of earnings on dividends, leaving 9% to invest in their business and people (Kinni). It is then suggested that this is due to the sputtering engines of Capitalism.

These setbacks and losses are not because of Capitalism.  The critics fail to address that since Capitalism is the most prosperous and free system today, this gives companies and institutions the freedom to make poor governing, financial laws, and decisions. In other words, it’s the fault of the own individuals that make up these institutions and not the fault of the entire economic and political system. To address Freeman’s piece regarding the dilemma of homelessness in Seattle, Freeman is misaligning the responsibility of Capitalism. No economic system, including Capitalism, can guarantee Freedom or equality, let alone perfection. Even if it is undeniable that Capitalism is the cause of the problem, Socialist-like solutions such as taxing the rich and distributing wealth and increased government intervention is undeniably not the solution. Freeman’s solutions will cripple incentive and competition to naturally solve the problem through commerce. Regarding Kinni’s take on the lack of investment of companies in themselves is again, not the fault of Capitalism. In fact, it’s not even a problem, and here’s why. The study that is referred to here states that the total earnings of S&P 500 companies equate to $2.4 Trillion dollars, which means 9% of that is $206 Billion. Evidence proves that these S&P 500 companies hire the absolute best of the best from the best of the best schools. This means that spending their earnings on training and investment in employees isn’t as necessary and the consensual agreement between an employer and employee to agree on a salary is not an issue, meaning employers and employees are happy to be paid what they’re paid, eliminating a portion of the need for a company to invest more of its earnings in itself. On top of that line of reasoning, Capitalism rewards business with honest and civil practices. This is because Entrepreneurs that engage in greedy and deceitful practices such as Bernie Madoff and the CEO of Enron during its scandal, Kenneth Lay, fail in Capitalist systems. They fail in Capitalist systems because engaging in true competition and creating the greatest and most efficient product for the consumer gets rewarded in the long run, and deceitful practices like these only trick people temporarily in the short run (Mueller 44).  To summarize, the arguments proposed by the opposition are invalidated because Capitalism rewards ethical business practices, propagates prosperity and freedom, and brings success to those who partake in Capitalism properly.

In Conclusion, Capitalism is the greatest social and economic system due to its advocation in ethical business practices, the way it brings about peace in civilized countries that partake in it, and the way Capitalism can foster competition and incentives like it did in the Communications industry. These reasons indicate that advocating for Capitalism can help make the world a much better place.

Capitalism Is An Unparalleled Economic And Political System. (2019, Nov 19). Retrieved from https://papersowl.com/examples/capitalism-is-an-unparalleled-economic-and-political-system/