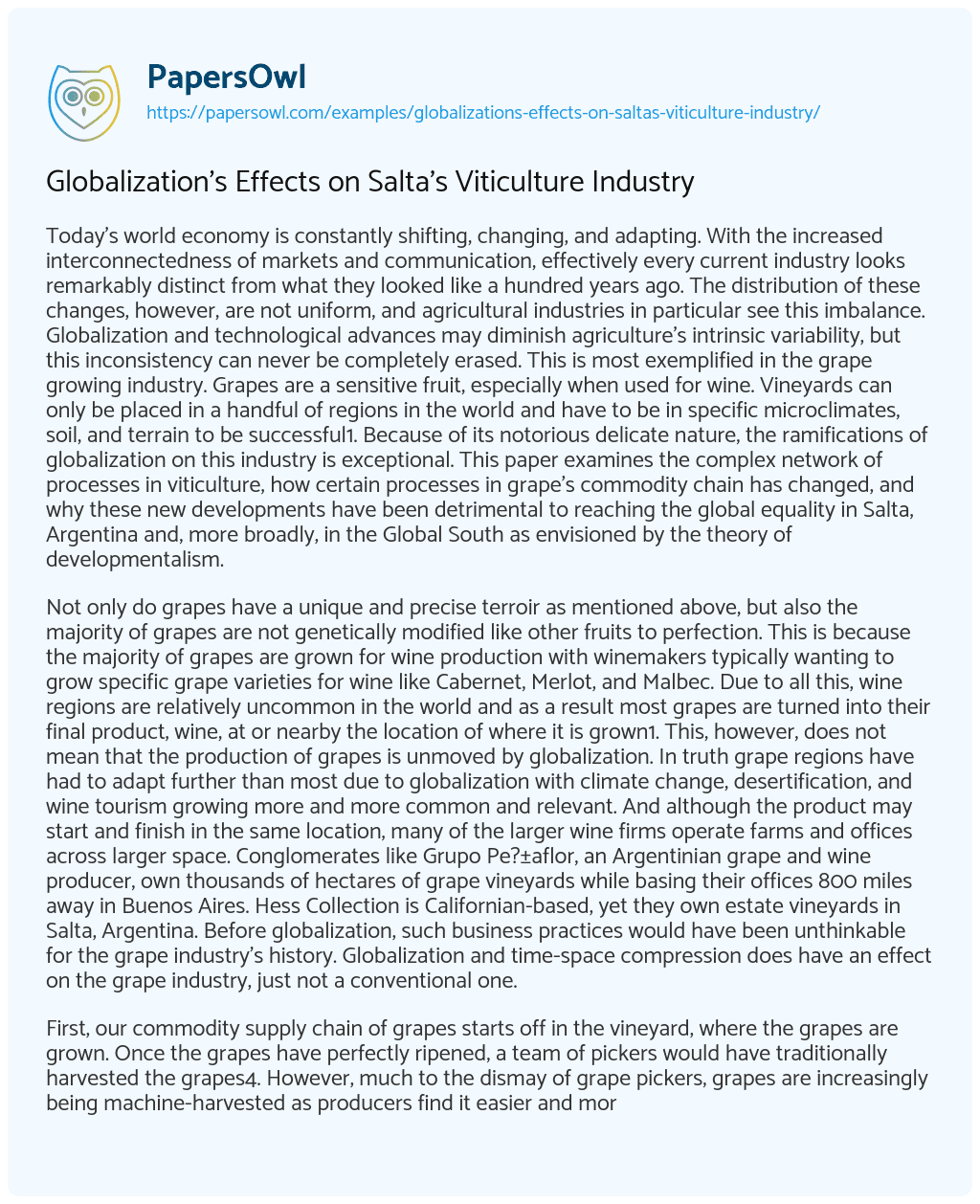 Today’s world economy is constantly shifting, changing, and adapting. With the increased interconnectedness of markets and communication, effectively every current industry looks remarkably distinct from what they looked like a hundred years ago. The distribution of these changes, however, are not uniform, and agricultural industries in particular see this imbalance. Globalization and technological advances may diminish agriculture’s intrinsic variability, but this inconsistency can never be completely erased. This is most exemplified in the grape growing industry. Grapes are a sensitive fruit, especially when used for wine. Vineyards can only be placed in a handful of regions in the world and have to be in specific microclimates, soil, and terrain to be successful1. Because of its notorious delicate nature, the ramifications of globalization on this industry is exceptional. This paper examines the complex network of processes in viticulture, how certain processes in grape’s commodity chain has changed, and why these new developments have been detrimental to reaching the global equality in Salta, Argentina and, more broadly, in the Global South as envisioned by the theory of developmentalism.

Not only do grapes have a unique and precise terroir as mentioned above, but also the majority of grapes are not genetically modified like other fruits to perfection. This is because the majority of grapes are grown for wine production with winemakers typically wanting to grow specific grape varieties for wine like Cabernet, Merlot, and Malbec. Due to all this, wine regions are relatively uncommon in the world and as a result most grapes are turned into their final product, wine, at or nearby the location of where it is grown1. This, however, does not mean that the production of grapes is unmoved by globalization. In truth grape regions have had to adapt further than most due to globalization with climate change, desertification, and wine tourism growing more and more common and relevant. And although the product may start and finish in the same location, many of the larger wine firms operate farms and offices across larger space. Conglomerates like Grupo Pe?±aflor, an Argentinian grape and wine producer, own thousands of hectares of grape vineyards while basing their offices 800 miles away in Buenos Aires. Hess Collection is Californian-based, yet they own estate vineyards in Salta, Argentina. Before globalization, such business practices would have been unthinkable for the grape industry’s history. Globalization and time-space compression does have an effect on the grape industry, just not a conventional one.

First, our commodity supply chain of grapes starts off in the vineyard, where the grapes are grown. Once the grapes have perfectly ripened, a team of pickers would have traditionally harvested the grapes4. However, much to the dismay of grape pickers, grapes are increasingly being machine-harvested as producers find it easier and more cost-effective to implement new technology into the production process. After the grapes are picked, they are sorted and crushed for fermentation. Similar to grape-picking, this portion of the commodity chain has also begun being outsourced from traditional hand sorted and hand crushed grapes to more cost-effective methods like third party outsourcing companies and machines who automatically sort and crush the grapes4. After the grapes are fermented, matured, bottled, and packaged, some producers employ agents or a sales force staff, but generally most producers are ready to transport their good and contract third party distribution companies to assist with transporting the finished product to the rest of the world.

Focusing specifically in Salta, the effects of globalization are noticeable. Argentina’s northwest province of Salta is in a unique situation. Salta is still a peripheral area in the global south, yet it’s economy is growing rapidly. Argentina’s northwest has experienced an influx of foreign investment from worldwide wine producers from California to France. Salta’s total value of wine exports has increased from 2.6 million US$ in 2001 to over 20 million US$ in 2014. It is also estimated that Salta’s grape tourism has increased from 75,586 visitors in 2007 to 246,078 visitors in 2013. The grape industry’s tourism has had diverse effects on the local economy. In one sense, globalization has given Salta’s economy great capital and a demand for labor. However, in another sense many of the newly-created jobs are predominantly low wage and seasonal7. Wealthy elite from all over the world tour Salta’s grape vineyards while the local population grapple with a rapidly rising cost of living7. Not only do the local populations have to struggle unmaintainable living costs, but they also have to deal with various environmental problems caused by the commercial farming of grapes. Local populations in other parts of Argentina, such as Mendoza, have experienced harmful environmental effects like desertification, which primarily hurt the small farmer. While other grape-growing regions, like Italy’s Prosecco region, face rapidly expanding vineyards, conforming their landscape for commercial grape production. Gerhard Rainer eloquently sums it up:

“the increasing transnational flow of ideas, people, and capital in a globalizing countryside build on and reproduce uneven development patterns not only between the Global North and Global South but also within regions of the latter.”7

So if this industry isn’t for the local population, whom is it for? The United States, Canada, and The United Kingdom are the top 3 largest receivers of Argentina’s grapes and grape-related products. More and more of these developed nations in the Global North are becoming reliant on Argentina to produce their wine. The Global North have also begun to ‘consume’ grapes differently as tourism is increasingly becoming a major part of the industry. Spending by tourists from more affluent countries like Germany, The United States., The United Kingdom, and China accounted for more than 25 percent of total international tourist dollars in 2008. Consumers have begun to value the atmosphere and experience of the vineyards rather than the grapes that they actually produce9, signaling a shift towards an experience economy that relies heavily on tourism, the Global North, and a deliberate manipulation of culture12. International regulatory bodies like the WTO play little to no part in regulating Argentina’s wine exports which leaves transnational corporations in control of the process. These shifts indicate a growth in wealth disparity, with the elites of the Global North reaping the rewards and the local peripheral communities in the Global South being taken advantage of.

As Rainer states above, these uneven development patterns are not only prevalent between the Global North and Global South, but within regions of countries as well. This is typical in Argentina, where cities like Buenos Aires experience a great deal of development in its infrastructure and economy, while its more periphery regions, like Salta, reap little to none of it. Paul Knox and Sally Marston link globalization with increasing regional inequality within many countries, tracing back to the 1980s12. “Even when growth in some parts of a country’s economy is strong, relative and absolute regional poverty can persist for long periods”12. These ideas and real-world observances are incongruent with those of developmentalism, arguing that all periphery and semi-periphery countries are on a universal path to becoming core countries.

Globalization and the new processes that have come with it are changing up all agricultural industries, including the grape industry. However, antithetical to the theory of developmentalism, these new developments are destructive to reaching equality in the Global South. The outsourcing of jobs due to technology, the creation of seasonal and low wage jobs, and the increase dependence to the Global North from cultural/experience tourism are all factors that exacerbate inequality in the peripheral Global South. This growing inequality between global centers and its periphery countryside is not only happening in Argentina, but in countries around the world – including the United States. Considering how, why, and where development happens in Salta and Argentina is fundamental in understanding the new development that is happening all around the world.