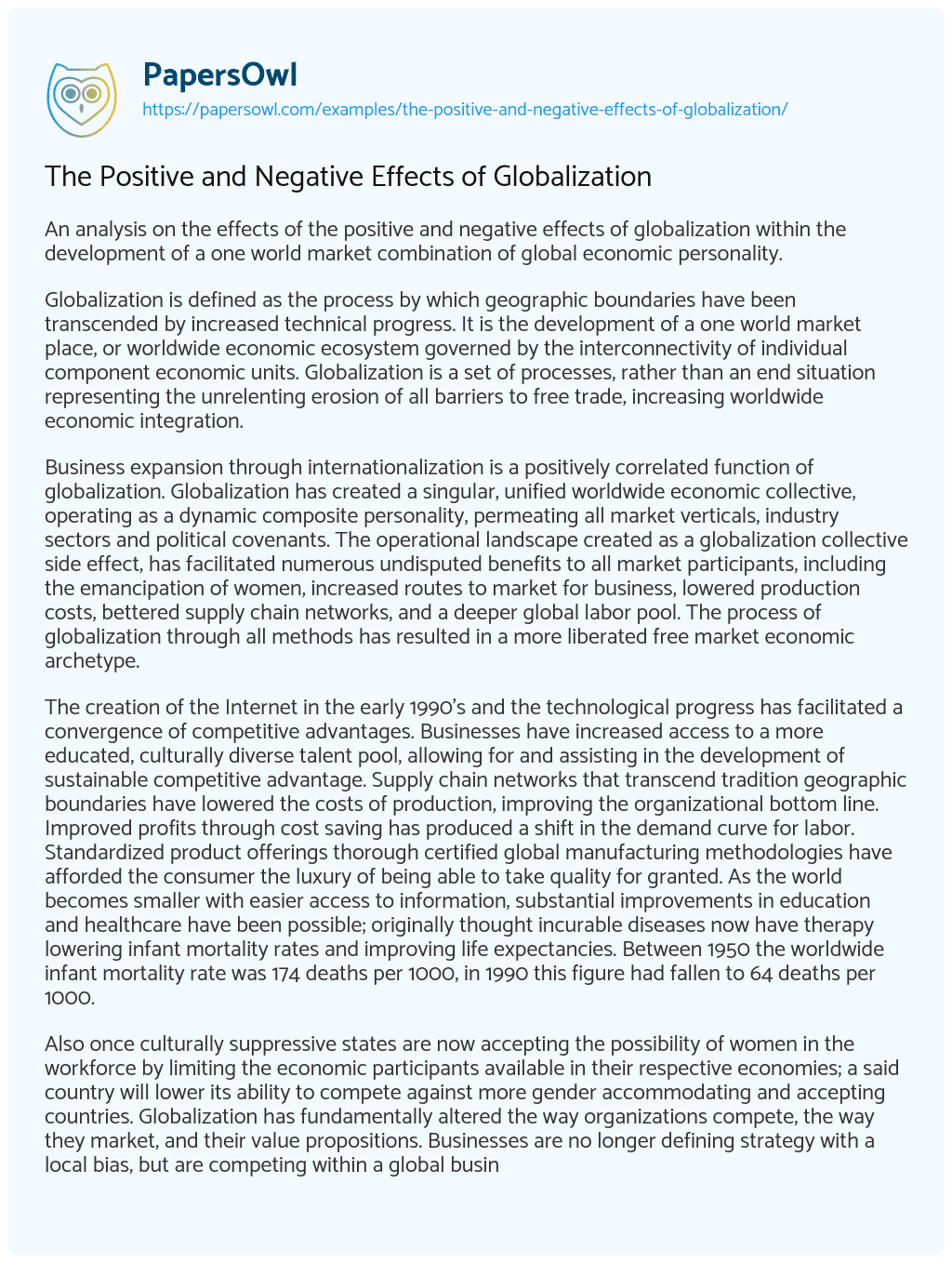 An analysis on the effects of the positive and negative effects of globalization within the development of a one world market combination of global economic personality.

Globalization is defined as the process by which geographic boundaries have been transcended by increased technical progress. It is the development of a one world market place, or worldwide economic ecosystem governed by the interconnectivity of individual component economic units. Globalization is a set of processes, rather than an end situation representing the unrelenting erosion of all barriers to free trade, increasing worldwide economic integration.

Business expansion through internationalization is a positively correlated function of globalization. Globalization has created a singular, unified worldwide economic collective, operating as a dynamic composite personality, permeating all market verticals, industry sectors and political covenants. The operational landscape created as a globalization collective side effect, has facilitated numerous undisputed benefits to all market participants, including the emancipation of women, increased routes to market for business, lowered production costs, bettered supply chain networks, and a deeper global labor pool. The process of globalization through all methods has resulted in a more liberated free market economic archetype.

The creation of the Internet in the early 1990’s and the technological progress has facilitated a convergence of competitive advantages. Businesses have increased access to a more educated, culturally diverse talent pool, allowing for and assisting in the development of sustainable competitive advantage. Supply chain networks that transcend tradition geographic boundaries have lowered the costs of production, improving the organizational bottom line. Improved profits through cost saving has produced a shift in the demand curve for labor. Standardized product offerings thorough certified global manufacturing methodologies have afforded the consumer the luxury of being able to take quality for granted. As the world becomes smaller with easier access to information, substantial improvements in education and healthcare have been possible; originally thought incurable diseases now have therapy lowering infant mortality rates and improving life expectancies. Between 1950 the worldwide infant mortality rate was 174 deaths per 1000, in 1990 this figure had fallen to 64 deaths per 1000.

Also once culturally suppressive states are now accepting the possibility of women in the workforce by limiting the economic participants available in their respective economies; a said country will lower its ability to compete against more gender accommodating and accepting countries. Globalization has fundamentally altered the way organizations compete, the way they market, and their value propositions. Businesses are no longer defining strategy with a local bias, but are competing within a global business ecosystem, where decisions can only be made by understanding all of the inputs and outputs of that system. Businesses can no longer operate as independent components of an economic collective but rather act as interrelated component parts of an overall system. Open markets are the best engine for improving living standards and building shared collective prosperity. Only countries that remove the shackles to free trade, capital movement, and international competition will realize socioeconomic progress.

While weighing the benefits of continuous globalization, it is evident that for every positive there is often a negative. Some economists argue that globalization has a debilitating effect on emerging markets and infantile industry. The interconnectivity of rich and poor nations is a zero sum game, that exists outside the framework of pareto criterion. It is not possible for one economic unit (country) to benefit without making another economic entity worse off. Someone has to win and someone has to lose.

It is still however acceptable and beneficial if the alternative of not engaging in trade is less savory than the loss that any such trade would incur. It is clear that there are significant in-equity problems as a result of globalization. It is argued that globalization has increased sovereign wealth income inequalities with continual divergence resulting in more polarization of incomes worldwide. Greater access to labor markets has on one hand facilitated increased employment, and on the other hand the excess supply has created a producer sovereign labor market and lowered global wage rates. Lower disposable income (particularly in emerging economies), lowers aggregate demand within the national economy.

The lowered demand for internal labor as a result of decreased money supply is the precursor to a vicious cycle of unemployment due to cyclical demand. This means that rather than leveraging the opportunities created by the fruits of globalization, poorer nations are struggling with internal economic strife, and falling even further behind their Western counterparts. The second cost of globalization stems from the resource and economic interdependencies that it creates. When economies and the businesses within those economies are so closely linked and correlated, there is a systemic risk to the whole economic ecosystem . If one of the parts of that system were to fail, there would be a domino effect knocking over all other elements of that system. This is evidenced in the collapse of the housing market in the United States in late 2007.

As financial institutions began to falter in the US as a result of complex structured products, the problems inevitably began to spread to firms in Europe and the United Kingdom. The sheer density and number of unknown correlations between firms meant that no one organization had a complete picture of its exposure to it counterparties. This lack of knowledge prevented firms from being able to implement any risk mitigating strategies and was the ultimate cause of the failure of Lehman Brothers, a century old Wall Street investment banking giant. Lehman Brothers International as an organization built itself on the foundation laid by economic globalization. They went from a scrappy tier two investment bank with seventeen billion dollars of revenue in 2003 to fifty seven billion dollars in 2007. As the financial services world joined hands in holy matrimony in early 1990’s, agreeing to ever more lenient repurchase financing terms for fellow members, the church bells were ringing marking the beginning of the end.

Complex financial alchemy was used to develop highly structured, highly profitable instruments of speculation with Lehman Brothers . Easier access to overseas markets and clientele created by globalization had allowed the firm on offer its services on an ever widening foreign audience. Lehman Brothers continued to create and sell financial derivatives. When the market began to sink in 2007, Lehman Brothers immediately found itself in an unfamiliar situation. Not only were US markets falling, but it seemed that world markets were acting in unison and collapsing together. Lehman Brothers as a function of globalization experienced a black swan event, an event so statistically implausible that it was unlikely to happen in a million years.

A harsh lesson on the black swan principal, “ The observation of one thousand white swans is not enough to infer that all swans are white, but the sighting of a single black swan is enough to refute the conclusion” A worldwide recession as experienced in 2010 caused partly by globalization could result in a desire by government and market participants to break the economic bonds built by the globalization process. This was observed in the Great Depression of the 1930s. The severe result which is severe economic dissatisfaction, followed by economic disagreement climaxes into economic warfare and possibly to military conflict. It is seen that globalization is allowing foreign powers (in the form of external political influencers as well as Multi National Corporations) to govern the resources of a nation as they see most beneficial to their own motivations.

The fundamental aim and goal of this research essay was to discuss the positive and negative effects of globalization and the effect that they have on the business playing field. Whether globalization by opinion is viewed as negative or an inherently positive force for continued economic progress, it is unmistakable that it produces massive opportunities and frightening challenges. Globalization can act in favor or not in favor of an economy depending on the situation, but it definitely impacts all economies. It must also be accepted that the combination of variables, known and unknown, that has lead society to a globalised one world economic system are still abundantly active. The trend is still bullish and is likely to accelerate with economic resources diminishing, increasing technical progress happening daily, and barriers to progress falling as fast.

Thus, we see that there is a strong connection between globalization and the development or non-development of a country. In a situation where the economies of different countries are highly correlated to each other, it is important for the countries to work according to the international scenario. Different countries adopt different policies but in the case of globalization, it is often observed that the policies of one economy are adjusted slightly in order to make them align the policies of other economies . In conclusion, globalization is a journey to be embraced rather than feared. It is the key that will remove the chains of impoverishment from third world economic powers, and it is the lock that will bind a composite global economic collective into achieving sustainable socioeconomic progress.

The Positive and Negative Effects of Globalization. (2021, Mar 22). Retrieved from https://papersowl.com/examples/the-positive-and-negative-effects-of-globalization/