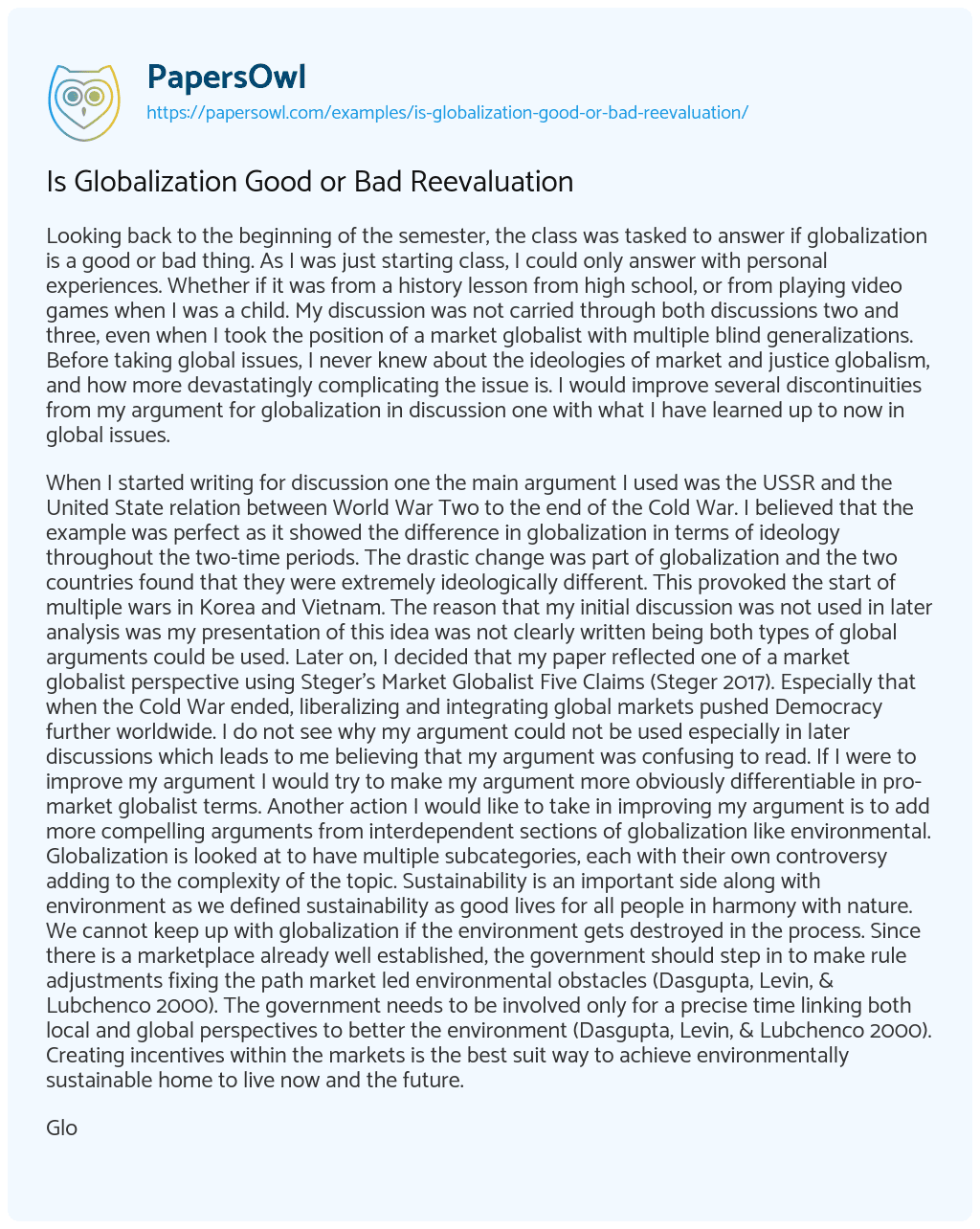 Looking back to the beginning of the semester, the class was tasked to answer if globalization is a good or bad thing. As I was just starting class, I could only answer with personal experiences. Whether if it was from a history lesson from high school, or from playing video games when I was a child. My discussion was not carried through both discussions two and three, even when I took the position of a market globalist with multiple blind generalizations. Before taking global issues, I never knew about the ideologies of market and justice globalism, and how more devastatingly complicating the issue is. I would improve several discontinuities from my argument for globalization in discussion one with what I have learned up to now in global issues.

When I started writing for discussion one the main argument I used was the USSR and the United State relation between World War Two to the end of the Cold War. I believed that the example was perfect as it showed the difference in globalization in terms of ideology throughout the two-time periods. The drastic change was part of globalization and the two countries found that they were extremely ideologically different. This provoked the start of multiple wars in Korea and Vietnam. The reason that my initial discussion was not used in later analysis was my presentation of this idea was not clearly written being both types of global arguments could be used. Later on, I decided that my paper reflected one of a market globalist perspective using Steger’s Market Globalist Five Claims (Steger 2017). Especially that when the Cold War ended, liberalizing and integrating global markets pushed Democracy further worldwide. I do not see why my argument could not be used especially in later discussions which leads to me believing that my argument was confusing to read. If I were to improve my argument I would try to make my argument more obviously differentiable in pro-market globalist terms. Another action I would like to take in improving my argument is to add more compelling arguments from interdependent sections of globalization like environmental. Globalization is looked at to have multiple subcategories, each with their own controversy adding to the complexity of the topic. Sustainability is an important side along with environment as we defined sustainability as good lives for all people in harmony with nature. We cannot keep up with globalization if the environment gets destroyed in the process. Since there is a marketplace already well established, the government should step in to make rule adjustments fixing the path market led environmental obstacles (Dasgupta, Levin, & Lubchenco 2000). The government needs to be involved only for a precise time linking both local and global perspectives to better the environment (Dasgupta, Levin, & Lubchenco 2000). Creating incentives within the markets is the best suit way to achieve environmentally sustainable home to live now and the future.

Globalization is still a good thing everything considered. The world we know it today has issues that have affected many people for better and worse. Even though we live at an unsustainable time there are multiple routes we can take, such as those to use the markets we already have, to incite global environmental improvement.

Is Globalization Good or Bad Reevaluation. (2019, Mar 04). Retrieved from https://papersowl.com/examples/is-globalization-good-or-bad-reevaluation/