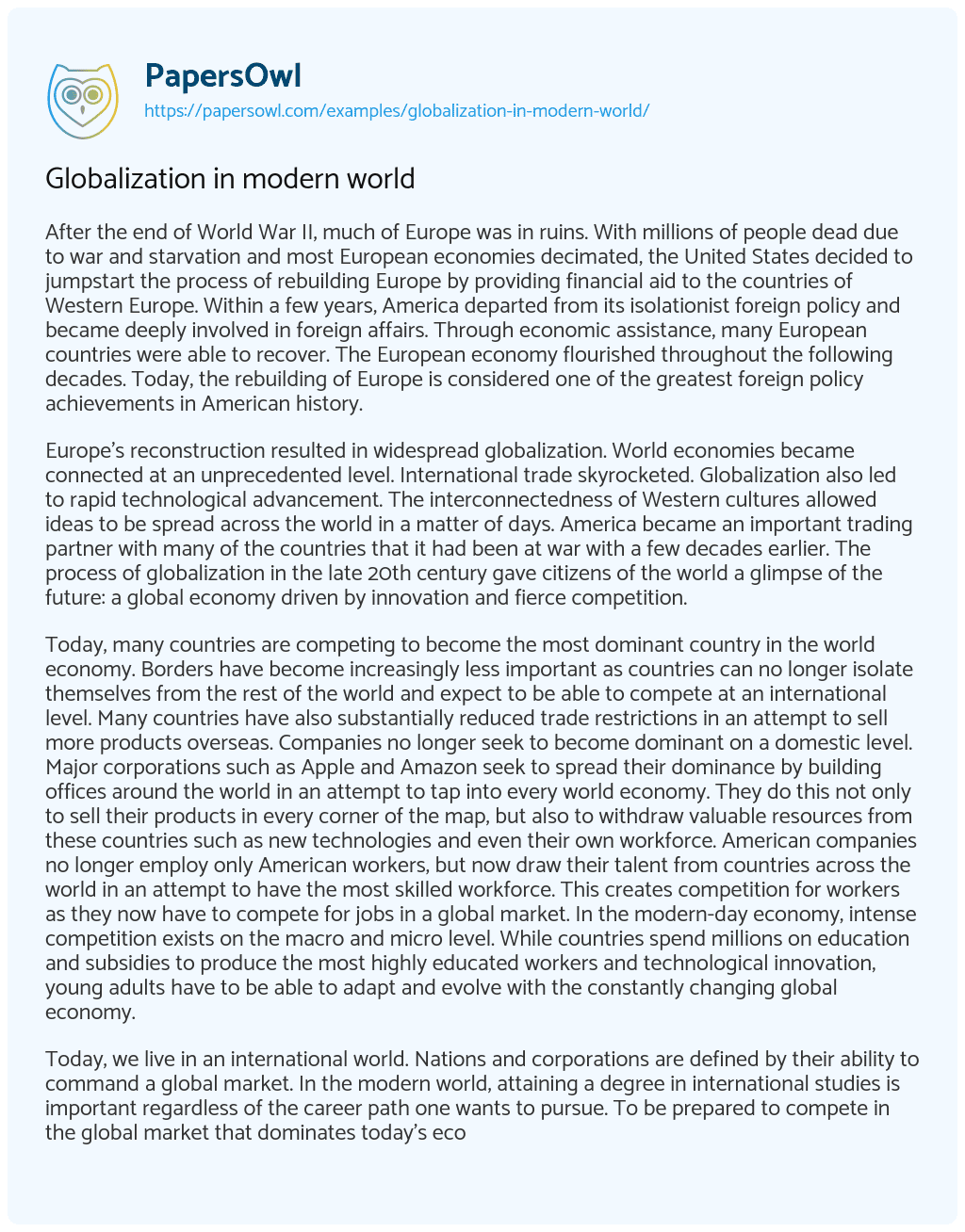 After the end of World War II, much of Europe was in ruins. With millions of people dead due to war and starvation and most European economies decimated, the United States decided to jumpstart the process of rebuilding Europe by providing financial aid to the countries of Western Europe. Within a few years, America departed from its isolationist foreign policy and became deeply involved in foreign affairs. Through economic assistance, many European countries were able to recover. The European economy flourished throughout the following decades. Today, the rebuilding of Europe is considered one of the greatest foreign policy achievements in American history.

Europe’s reconstruction resulted in widespread globalization. World economies became connected at an unprecedented level. International trade skyrocketed. Globalization also led to rapid technological advancement. The interconnectedness of Western cultures allowed ideas to be spread across the world in a matter of days. America became an important trading partner with many of the countries that it had been at war with a few decades earlier. The process of globalization in the late 20th century gave citizens of the world a glimpse of the future: a global economy driven by innovation and fierce competition.

Today, many countries are competing to become the most dominant country in the world economy. Borders have become increasingly less important as countries can no longer isolate themselves from the rest of the world and expect to be able to compete at an international level. Many countries have also substantially reduced trade restrictions in an attempt to sell more products overseas. Companies no longer seek to become dominant on a domestic level. Major corporations such as Apple and Amazon seek to spread their dominance by building offices around the world in an attempt to tap into every world economy. They do this not only to sell their products in every corner of the map, but also to withdraw valuable resources from these countries such as new technologies and even their own workforce. American companies no longer employ only American workers, but now draw their talent from countries across the world in an attempt to have the most skilled workforce. This creates competition for workers as they now have to compete for jobs in a global market. In the modern-day economy, intense competition exists on the macro and micro level. While countries spend millions on education and subsidies to produce the most highly educated workers and technological innovation, young adults have to be able to adapt and evolve with the constantly changing global economy.

Today, we live in an international world. Nations and corporations are defined by their ability to command a global market. In the modern world, attaining a degree in international studies is important regardless of the career path one wants to pursue. To be prepared to compete in the global market that dominates today’s economies, I will have to understand why decisions are made at a global level. An international studies degree will prepare me for the global competition that awaits me in the job market by giving me a deep understanding of foreign cultures. Learning about and understanding other cultures is necessary to break down the barriers that divide our world. In a world where transparency between nations in critical, I must be able to understand what separates and unites countries and cultures. I would like to study German, in particular