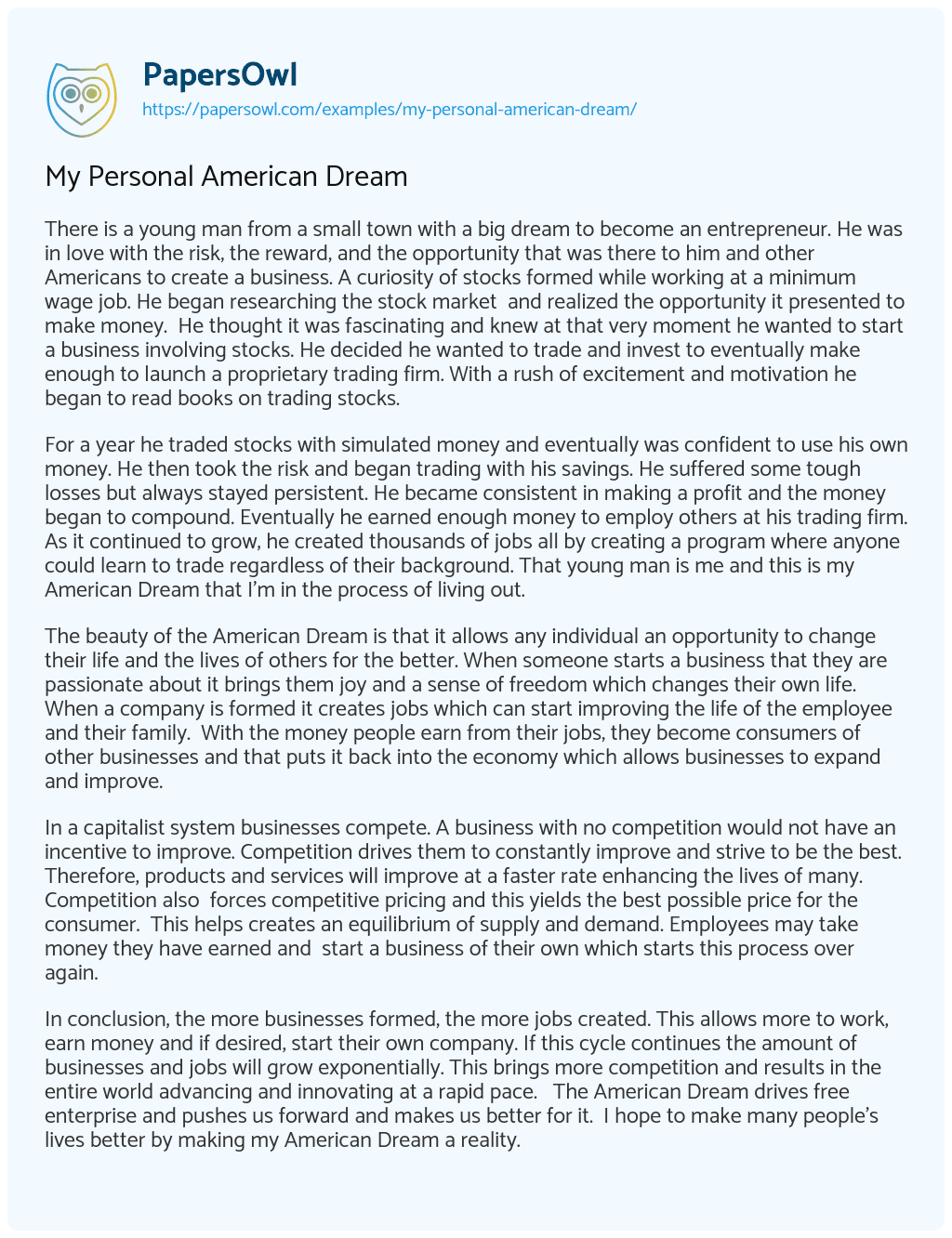 There is a young man from a small town with a big dream to become an entrepreneur. He was in love with the risk, the reward, and the opportunity that was there to him and other Americans to create a business. A curiosity of stocks formed while working at a minimum wage job. He began researching the stock market  and realized the opportunity it presented to make money.  He thought it was fascinating and knew at that very moment he wanted to start a business involving stocks. He decided he wanted to trade and invest to eventually make enough to launch a proprietary trading firm. With a rush of excitement and motivation he began to read books on trading stocks.

For a year he traded stocks with simulated money and eventually was confident to use his own money. He then took the risk and began trading with his savings. He suffered some tough losses but always stayed persistent. He became consistent in making a profit and the money began to compound. Eventually he earned enough money to employ others at his trading firm. As it continued to grow, he created thousands of jobs all by creating a program where anyone could learn to trade regardless of their background. That young man is me and this is my American Dream that I’m in the process of living out.

The beauty of the American Dream is that it allows any individual an opportunity to change their life and the lives of others for the better. When someone starts a business that they are passionate about it brings them joy and a sense of freedom which changes their own life. When a company is formed it creates jobs which can start improving the life of the employee and their family.  With the money people earn from their jobs, they become consumers of other businesses and that puts it back into the economy which allows businesses to expand and improve.

In a capitalist system businesses compete. A business with no competition would not have an incentive to improve. Competition drives them to constantly improve and strive to be the best. Therefore, products and services will improve at a faster rate enhancing the lives of many.  Competition also  forces competitive pricing and this yields the best possible price for the consumer.  This helps creates an equilibrium of supply and demand. Employees may take money they have earned and  start a business of their own which starts this process over again.

In conclusion, the more businesses formed, the more jobs created. This allows more to work, earn money and if desired, start their own company. If this cycle continues the amount of businesses and jobs will grow exponentially. This brings more competition and results in the entire world advancing and innovating at a rapid pace.   The American Dream drives free enterprise and pushes us forward and makes us better for it.  I hope to make many people’s lives better by making my American Dream a reality.