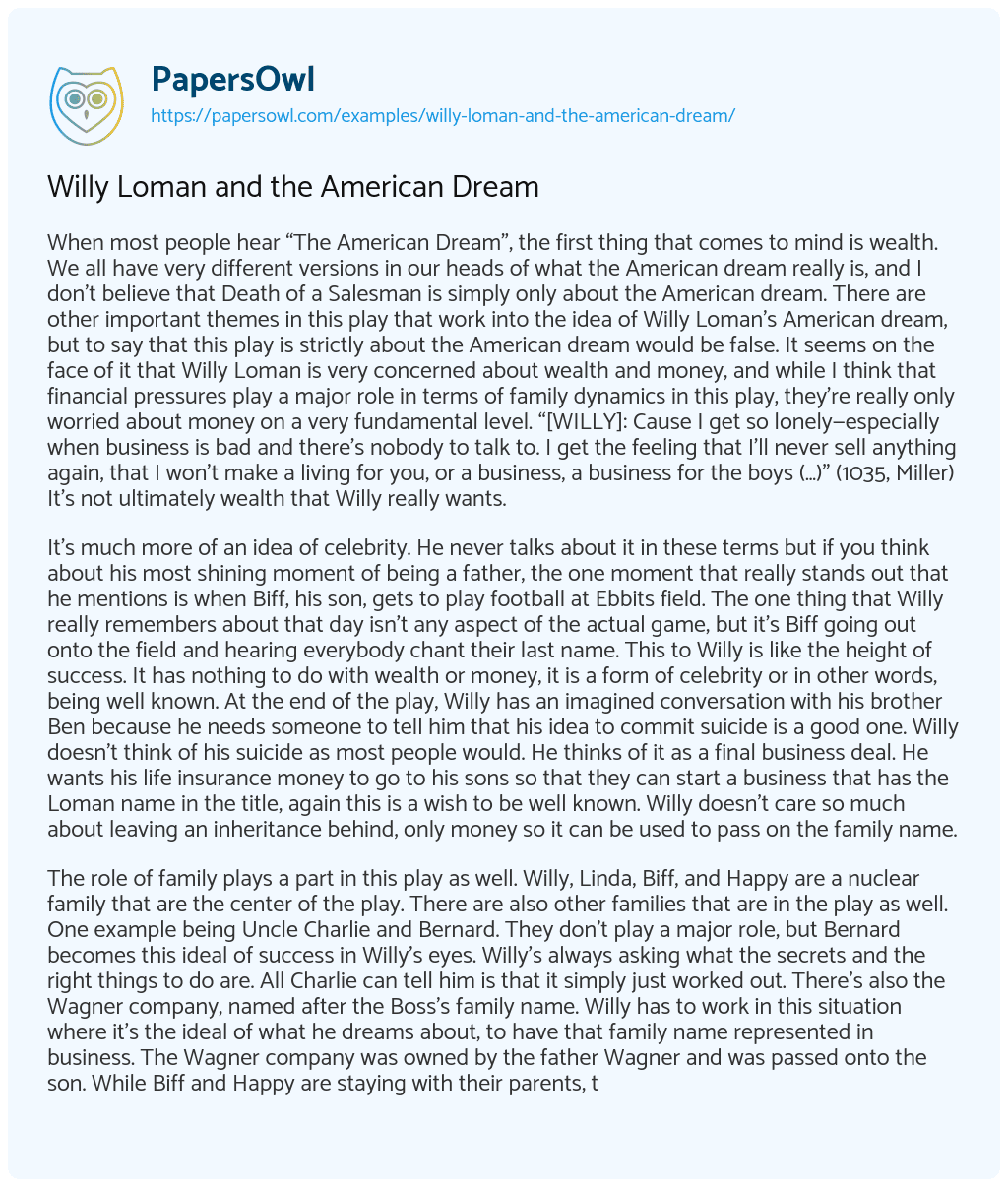 When most people hear “The American Dream”, the first thing that comes to mind is wealth. We all have very different versions in our heads of what the American dream really is, and I don’t believe that Death of a Salesman is simply only about the American dream. There are other important themes in this play that work into the idea of Willy Loman’s American dream, but to say that this play is strictly about the American dream would be false. It seems on the face of it that Willy Loman is very concerned about wealth and money, and while I think that financial pressures play a major role in terms of family dynamics in this play, they’re really only worried about money on a very fundamental level. “[WILLY]: Cause I get so lonely—especially when business is bad and there’s nobody to talk to. I get the feeling that I’ll never sell anything again, that I won’t make a living for you, or a business, a business for the boys (…)” (1035, Miller) It’s not ultimately wealth that Willy really wants.

It’s much more of an idea of celebrity. He never talks about it in these terms but if you think about his most shining moment of being a father, the one moment that really stands out that he mentions is when Biff, his son, gets to play football at Ebbits field. The one thing that Willy really remembers about that day isn’t any aspect of the actual game, but it’s Biff going out onto the field and hearing everybody chant their last name. This to Willy is like the height of success. It has nothing to do with wealth or money, it is a form of celebrity or in other words, being well known. At the end of the play, Willy has an imagined conversation with his brother Ben because he needs someone to tell him that his idea to commit suicide is a good one. Willy doesn’t think of his suicide as most people would. He thinks of it as a final business deal. He wants his life insurance money to go to his sons so that they can start a business that has the Loman name in the title, again this is a wish to be well known. Willy doesn’t care so much about leaving an inheritance behind, only money so it can be used to pass on the family name.

The role of family plays a part in this play as well. Willy, Linda, Biff, and Happy are a nuclear family that are the center of the play. There are also other families that are in the play as well. One example being Uncle Charlie and Bernard. They don’t play a major role, but Bernard becomes this ideal of success in Willy’s eyes. Willy’s always asking what the secrets and the right things to do are. All Charlie can tell him is that it simply just worked out. There’s also the Wagner company, named after the Boss’s family name. Willy has to work in this situation where it’s the ideal of what he dreams about, to have that family name represented in business. The Wagner company was owned by the father Wagner and was passed onto the son. While Biff and Happy are staying with their parents, they express to each other that they don’t want the same life that their father does for them. “[BIFF:] Sure, maybe we could buy a ranch. Raise cattle, use our muscles.

Men built like we are should be working out in the open. [HAPPY]: The Loman Brothers, eh?” (1029, Miller) I think that there is a bit of a parallel between the family with Willy as the father and the family with Willy as the son. Willy has his brother Ben and Willy’s sons Biff and Happy have each other. We were briefly told that Willy’s father sold flutes, so he was a bit of a salesman of his own. Willy remembers his childhood at one point in the play with his brother Ben and is thinking about how great their father was. Ben recounts Willy’s age at that time and also tells Willy that the reality of their childhood is that their father just up and left them, abandoned them. Willy, because he obviously can’t confront the reality of that statement, tells Ben that he has such a good memory since he was able to recall what age he was at that time. This moment in the play is very tragic. This part of the play gives us insight into why Willy is the way he is. He simply didn’t have a father as a role model, so he grew up to be this man in desperate need of validation of everything.

This comes back to why he seeks celebrity the way he does, it might be simply to fill the void of validation or of being known. He never had his father to tell him he’s doing a good job, so he seeks that from other people. If we were to write off Death of a Salesman as being simply just about the American dream, we would miss out on seeing that Willy is actually much more of a sympathetic character than I initially thought he was the first time I read the play. I would go so far as to call him a tragic hero of this play. In summary, Willy Loman wanted nothing more than a life of success and to be known and he wishes the same things for his sons. He became too obsessed with the idea of having the Loman name known and it ultimately ruined his family and, in the end, his life. His American dream was to leave this world with people knowing his name, but unfortunately it did not end like that for him.

Willy Loman and the American Dream. (2019, Apr 09). Retrieved from https://papersowl.com/examples/willy-loman-and-the-american-dream/

A Lot of Flaws of Willy Loman