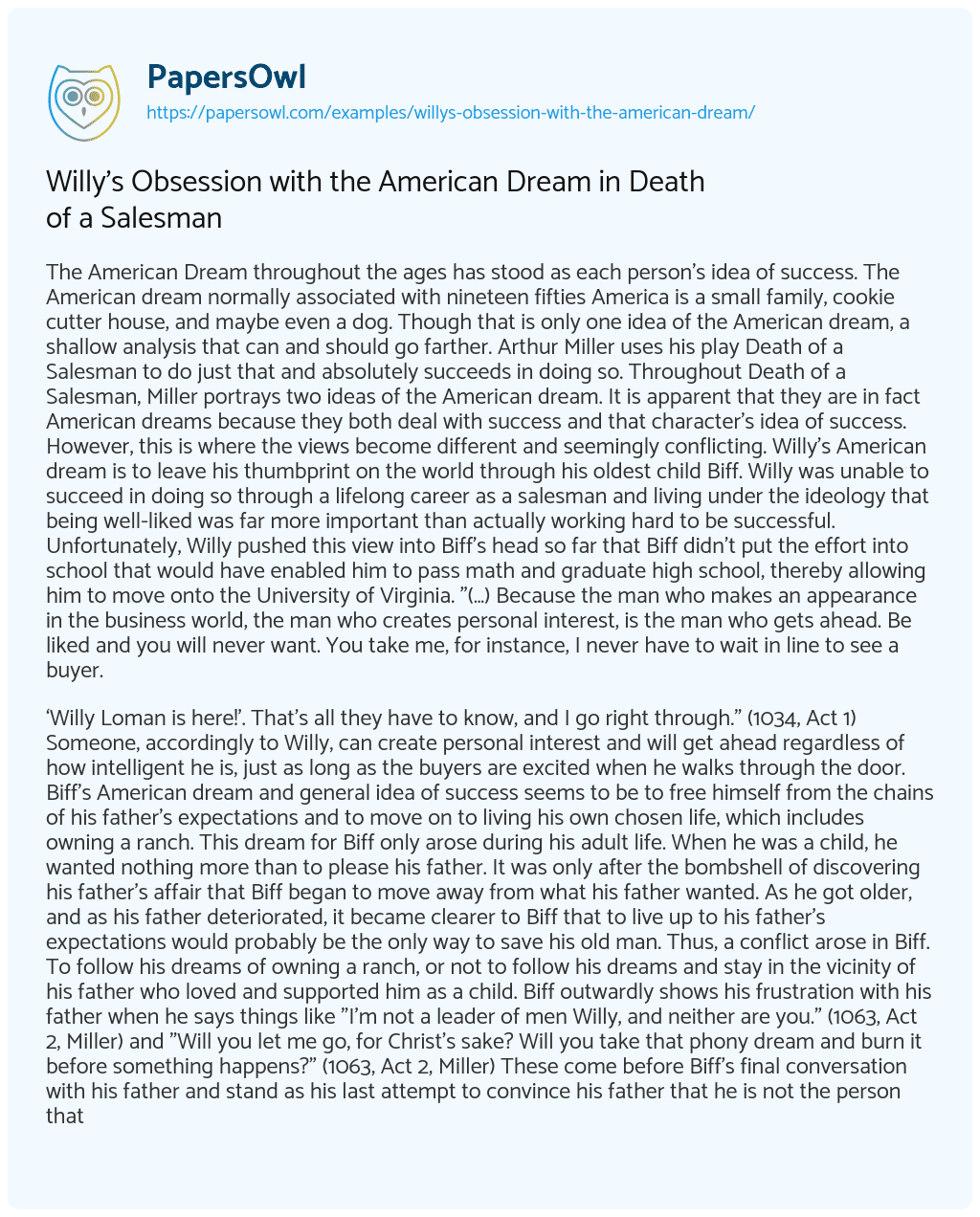 The American Dream throughout the ages has stood as each person’s idea of success. The American dream normally associated with nineteen fifties America is a small family, cookie cutter house, and maybe even a dog. Though that is only one idea of the American dream, a shallow analysis that can and should go farther. Arthur Miller uses his play Death of a Salesman to do just that and absolutely succeeds in doing so. Throughout Death of a Salesman, Miller portrays two ideas of the American dream. It is apparent that they are in fact American dreams because they both deal with success and that character’s idea of success. However, this is where the views become different and seemingly conflicting. Willy’s American dream is to leave his thumbprint on the world through his oldest child Biff. Willy was unable to succeed in doing so through a lifelong career as a salesman and living under the ideology that being well-liked was far more important than actually working hard to be successful. Unfortunately, Willy pushed this view into Biff’s head so far that Biff didn’t put the effort into school that would have enabled him to pass math and graduate high school, thereby allowing him to move onto the University of Virginia. “(…) Because the man who makes an appearance in the business world, the man who creates personal interest, is the man who gets ahead. Be liked and you will never want. You take me, for instance, I never have to wait in line to see a buyer.

‘Willy Loman is here!’. That’s all they have to know, and I go right through.” (1034, Act 1) Someone, accordingly to Willy, can create personal interest and will get ahead regardless of how intelligent he is, just as long as the buyers are excited when he walks through the door. Biff’s American dream and general idea of success seems to be to free himself from the chains of his father’s expectations and to move on to living his own chosen life, which includes owning a ranch. This dream for Biff only arose during his adult life. When he was a child, he wanted nothing more than to please his father. It was only after the bombshell of discovering his father’s affair that Biff began to move away from what his father wanted. As he got older, and as his father deteriorated, it became clearer to Biff that to live up to his father’s expectations would probably be the only way to save his old man. Thus, a conflict arose in Biff. To follow his dreams of owning a ranch, or not to follow his dreams and stay in the vicinity of his father who loved and supported him as a child. Biff outwardly shows his frustration with his father when he says things like “I’m not a leader of men Willy, and neither are you.” (1063, Act 2, Miller) and “Will you let me go, for Christ’s sake? Will you take that phony dream and burn it before something happens?” (1063, Act 2, Miller) These come before Biff’s final conversation with his father and stand as his last attempt to convince his father that he is not the person that Willy thought he would be. It is in my opinion at this point in the play that Arthur Miller’s idea of the American Dream closely follows Willy’s.

Miller’s thoughts of the American people are that they instinctively want to leave a thumbprint on the world, to do something so amazing that people will never forget. It is through Willy that we see his American dream and how it directly affects all of his decisions and we finally make the connection and come to the realization that Willy is, in fact, a tragic hero throughout the entire play. Willy’s flaw revolves around his fear of being displaced from his past in the glory that was the Ebbet’s field game, which was the point in time when Willy was so sure of the future of his kids and that things were going so well for him. But once Biff failed math and Willy’s affair was discovered, it systematically led to the destruction of any hope that Biff would be well-liked and make it in the business world. Willy began to see his world crashing around him. It was a slow decomposition of his life that ended with his suicide. Willy’s suicide was his final attempt to solidify his place in the world. It was his attempt to end the war within himself and quell the fear that he was being displaced from the world of his past. It is then perhaps that Miller’s true perception of the American dream revolves around the assertion that to let the fear of displacement rule over one’s life will, in effect, destroy one’s American dream and take him spiraling into an abyss of self-destruction. It is this tragic flaw inbred into all of us that will hinder our progression to succeed in realizing our own American dream that, according to Miller, should be a desire to leave our thumbprint on the world. That is Miller’s perception of the American dream, not to be forgotten.

Willy's Obsession with the American Dream in Death of a Salesman. (2021, Jan 25). Retrieved from https://papersowl.com/examples/willys-obsession-with-the-american-dream/