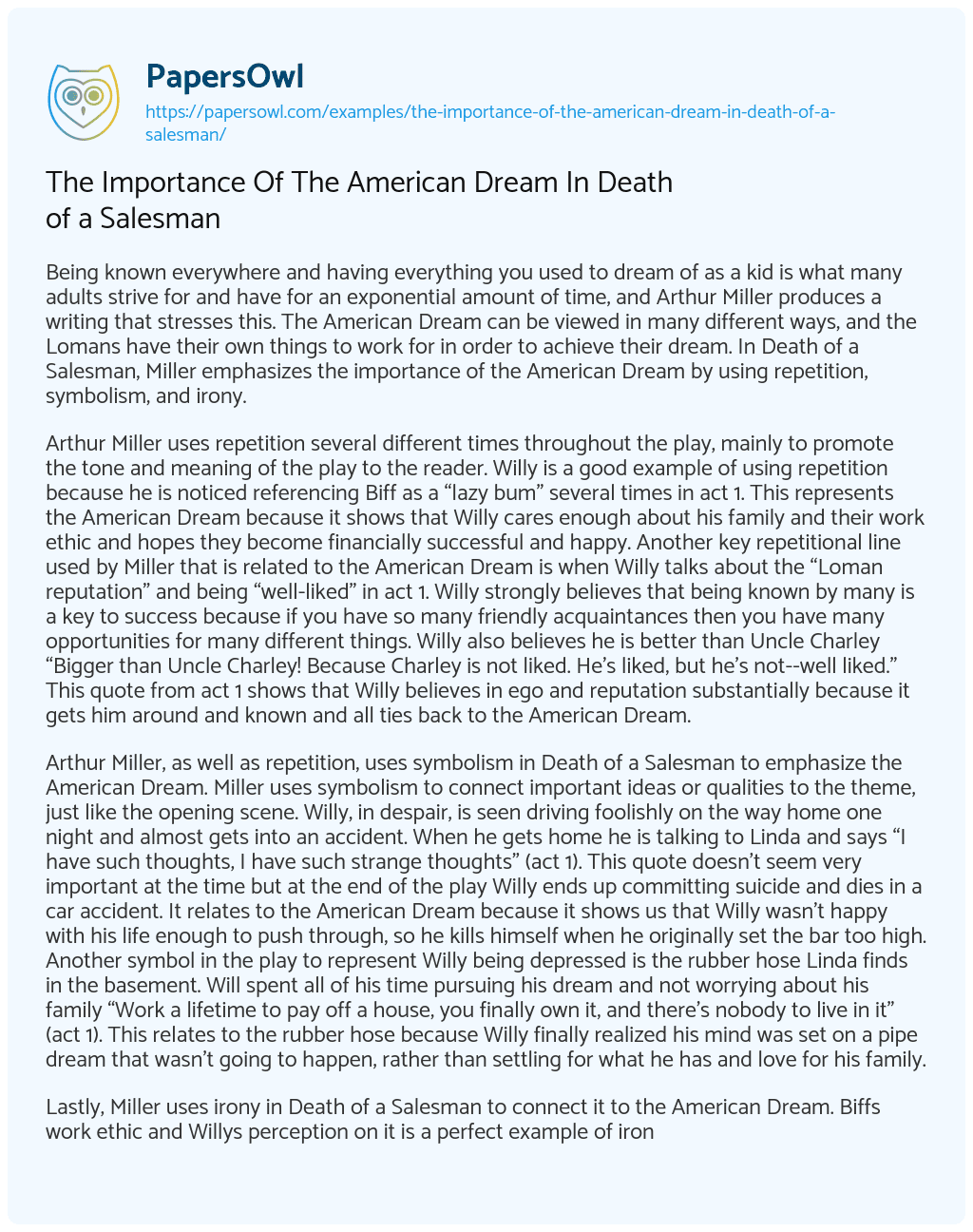 Being known everywhere and having everything you used to dream of as a kid is what many adults strive for and have for an exponential amount of time, and Arthur Miller produces a writing that stresses this. The American Dream can be viewed in many different ways, and the Lomans have their own things to work for in order to achieve their dream. In Death of a Salesman, Miller emphasizes the importance of the American Dream by using repetition, symbolism, and irony.

Arthur Miller uses repetition several different times throughout the play, mainly to promote the tone and meaning of the play to the reader. Willy is a good example of using repetition because he is noticed referencing Biff as a “lazy bum” several times in act 1. This represents the American Dream because it shows that Willy cares enough about his family and their work ethic and hopes they become financially successful and happy. Another key repetitional line used by Miller that is related to the American Dream is when Willy talks about the “Loman reputation” and being “well-liked” in act 1. Willy strongly believes that being known by many is a key to success because if you have so many friendly acquaintances then you have many opportunities for many different things. Willy also believes he is better than Uncle Charley “Bigger than Uncle Charley! Because Charley is not liked. He’s liked, but he’s not–well liked.” This quote from act 1 shows that Willy believes in ego and reputation substantially because it gets him around and known and all ties back to the American Dream.

Arthur Miller, as well as repetition, uses symbolism in Death of a Salesman to emphasize the American Dream. Miller uses symbolism to connect important ideas or qualities to the theme, just like the opening scene. Willy, in despair, is seen driving foolishly on the way home one night and almost gets into an accident. When he gets home he is talking to Linda and says “I have such thoughts, I have such strange thoughts” (act 1). This quote doesn’t seem very important at the time but at the end of the play Willy ends up committing suicide and dies in a car accident. It relates to the American Dream because it shows us that Willy wasn’t happy with his life enough to push through, so he kills himself when he originally set the bar too high. Another symbol in the play to represent Willy being depressed is the rubber hose Linda finds in the basement. Will spent all of his time pursuing his dream and not worrying about his family “Work a lifetime to pay off a house, you finally own it, and there’s nobody to live in it” (act 1). This relates to the rubber hose because Willy finally realized his mind was set on a pipe dream that wasn’t going to happen, rather than settling for what he has and love for his family.

Lastly, Miller uses irony in Death of a Salesman to connect it to the American Dream. Biffs work ethic and Willys perception on it is a perfect example of irony at the beginning of act 1. Willy and Linda get into an argument and Willy says, “Biff is a lazy bum” and three lines later he also says, “There’s one thing about Biff– he’s not lazy” (pg 16). This shows irony and its relation to the American Dream because Willy obviously can’t make up his mind, but he wants Biff to be a hard worker and support himself in order to be successful. Another form of irony Miller uses in the play is having Willys son Happy being named Happy. Willy and his son are unrealistically alike which means that Happy can’t be very happy after all. They share the same desirable self-confidence and stubbornness throughout the whole play and it leads to a bad ending.

The American Dream is shown to be a stressful thing for Willy, and also a depriving and depressing goal if it takes up all of his time and thinking. The American Dream can be viewed in many different ways, and the Lomans have their own things to work for in order to achieve their dream. In Death of a Salesman, Miller emphasizes the importance of the American Dream by using repetition, symbolism, and irony.

The Importance Of The American Dream In Death of a Salesman. (2021, Jan 25). Retrieved from https://papersowl.com/examples/the-importance-of-the-american-dream-in-death-of-a-salesman/