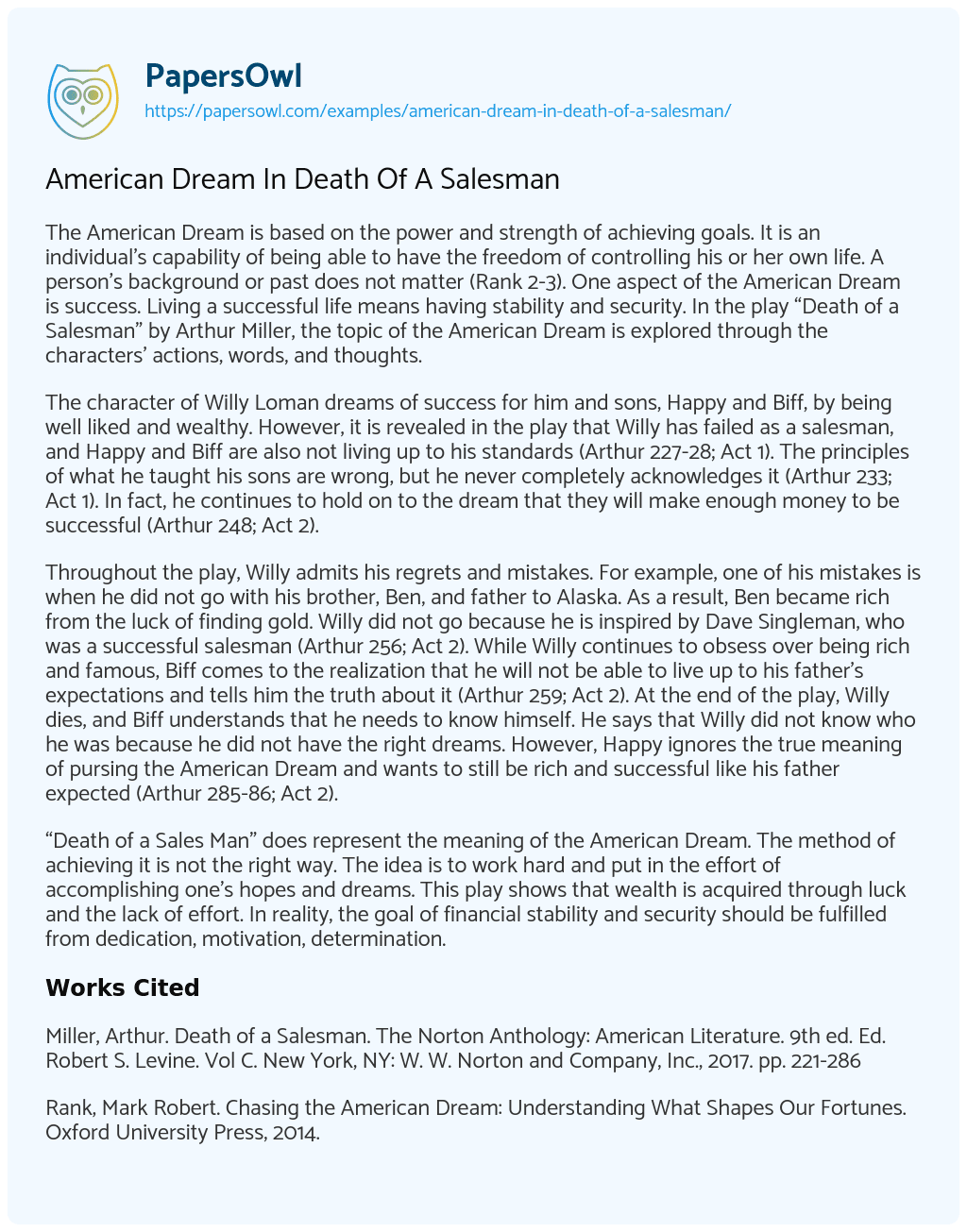 The American Dream is based on the power and strength of achieving goals. It is an individual’s capability of being able to have the freedom of controlling his or her own life. A person’s background or past does not matter (Rank 2-3). One aspect of the American Dream is success. Living a successful life means having stability and security. In the play “Death of a Salesman” by Arthur Miller, the topic of the American Dream is explored through the characters’ actions, words, and thoughts.

The character of Willy Loman dreams of success for him and sons, Happy and Biff, by being well liked and wealthy. However, it is revealed in the play that Willy has failed as a salesman, and Happy and Biff are also not living up to his standards (Arthur 227-28; Act 1). The principles of what he taught his sons are wrong, but he never completely acknowledges it (Arthur 233; Act 1). In fact, he continues to hold on to the dream that they will make enough money to be successful (Arthur 248; Act 2).

Throughout the play, Willy admits his regrets and mistakes. For example, one of his mistakes is when he did not go with his brother, Ben, and father to Alaska. As a result, Ben became rich from the luck of finding gold. Willy did not go because he is inspired by Dave Singleman, who was a successful salesman (Arthur 256; Act 2). While Willy continues to obsess over being rich and famous, Biff comes to the realization that he will not be able to live up to his father’s expectations and tells him the truth about it (Arthur 259; Act 2). At the end of the play, Willy dies, and Biff understands that he needs to know himself. He says that Willy did not know who he was because he did not have the right dreams. However, Happy ignores the true meaning of pursing the American Dream and wants to still be rich and successful like his father expected (Arthur 285-86; Act 2).

“Death of a Sales Man” does represent the meaning of the American Dream. The method of achieving it is not the right way. The idea is to work hard and put in the effort of accomplishing one’s hopes and dreams. This play shows that wealth is acquired through luck and the lack of effort. In reality, the goal of financial stability and security should be fulfilled from dedication, motivation, determination.

American Dream In Death Of A Salesman. (2021, Jan 25). Retrieved from https://papersowl.com/examples/american-dream-in-death-of-a-salesman/